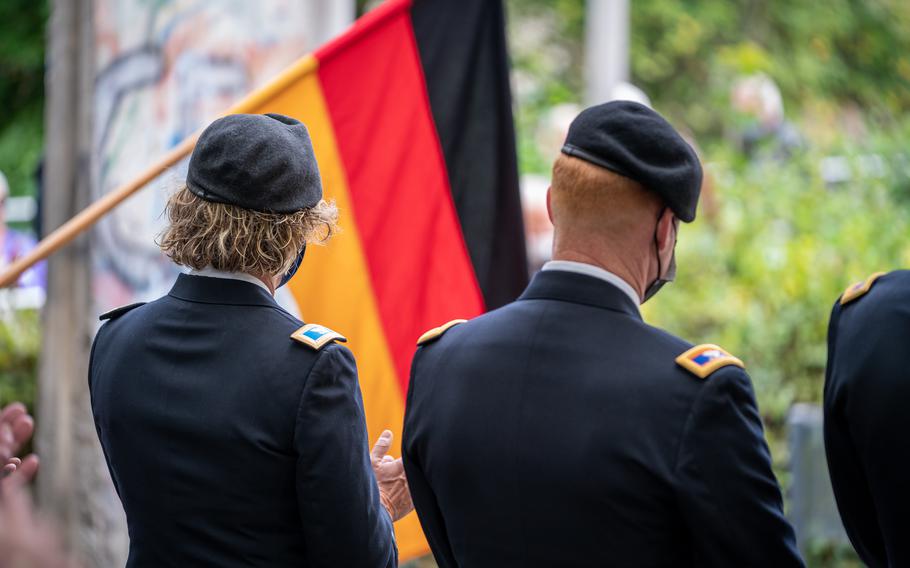 Army leaders attend a Germany Unity Day ceremony in 2020 near a portion of the Berlin Wall displayed in Ansbach. German tax authorities are now scrutinizing the U.S. military income of a family in Ansbach, which may indicate that a tax collection operation that the U.S. says misinterprets the NATO Status of Forces Agreement is spreading to Bavaria. (U.S. Army)

STUTTGART, Germany — A U.S. military family in Bavaria is being targeted by German tax investigators, possibly signaling an expansion of a controversial tax collection operation to a state where tens of thousands of Americans are based.

Earlier this month, Sandra Johnson, a German with a U.S. green card, opened her mail to find a letter from the Ansbach finance office demanding information about her husband, a Defense Department civilian.

The questionnaire, which resembled those that have been sent to active-duty military and other DOD personnel based some 160 miles away near Ramstein Air Base, was the first known to have been issued to a military family in Bavaria.

Tax officials wanted to know how long the Johnsons had been in Germany, and they sought proof that the family intended to leave in the future.

The tax office also told Johnson she needed to hand over her husband’s U.S. tax records for inspection. She said the stress is unbelievable.

“And you are basically left to deal with it by yourself,” she added.

Such questionnaires have been used to collect information and eventually open formal tax cases against American military members.

The stakes for families locked in such disputes have been high: threats of imprisonment and property confiscation, yearslong court fights and six-figure tax bills.

The U.S. government says the situation amounts to a violation of the NATO Status of Forces Agreement, which is designed to put military income off limits to local tax collectors.

But so far, the U.S. government has been powerless to stop it even though the matter has gotten the attention of Defense Secretary Lloyd Austin and U.S. Secretary of State Antony Blinken.

“While we do not comment on diplomatic exchanges, the embassy and the military commands continue to work closely in concert to address what we believe is a misinterpretation of the NATO Status of Forces Agreement,” the U.S Embassy in Berlin said Thursday in a statement. “The Department of Defense and Department of State remain engaged and are trying to reach a resolution of this long-standing issue.”

German tax offices have argued that language in the SOFA treaty justifies their actions. If military members aren’t in Germany “solely” for their jobs, they could be subjected to German tax for the same income on which they’re already paying U.S. taxes, German authorities say.

German tax collectors have built cases against Americans based on circumstances such as marriage to a German, tour extension, property purchases or enrollment of a child in a German school.

To avoid German income tax, Americans with a SOFA visa must prove they plan to leave the country. Yet tax offices have continued to pursue military personnel even after they have left Germany.

The Ansbach finance office declined to answer when asked how many tax cases are pending against U.S. military members.

“The tax office does not keep separate records of U.S. soldiers or members of the U.S. military who are stationed in the area under the NATO Forces Statute,” the Ansbach office said in a statement Friday.

They added that “the taxation of U.S. soldiers and members of the U.S. military has always been in compliance with the regulations of the NATO troop statute.”

German tax offices also have factored in housing allowances and on-base benefits like discounted gasoline, commissary shopping privileges and access to base gyms.

In the area around Ramstein Air Base, where most cases against Americans have centered so far, tax offices have imposed an annual flat penalty in the range of $15,000 to $20,000 based on benefits alone before looking at pay and housing allowance, according to private tax consultants, attorneys and affected military personnel.

“I’ve read about other people who have been in this situation, and I looked at it as weird and frightening,” Johnson said. “I wonder how many more people it’s going to be. These are families’ lives that are being messed with.”

Johnson said the Army legal office on post in Ansbach told her there was nothing it could do to help.

The U.S. military in Europe also has said it can’t get involved in individual tax cases, and Army legal officials have advised people to hire private attorneys.

U.S. European Command and U.S. Army Europe and Africa, which oversees SOFA matters in Germany, have been unable to provide any protection for personnel.

Thus far, the guidance by the Army’s legal office has been that military members should do their best to stay off the radar of tax authorities by not registering with a local town hall and not filing jointly if a German spouse needs to pay taxes.

Johnson, a German citizen who works as a contractor on base, said she caught the Ansbach tax office’s attention because she was required to file local taxes.

Even though she filed singly rather than jointly, as allowed by German law, she was met with the demand to hand over her husband’s U.S. tax records.

Johnson said she’s been forced to retain a lawyer to try to keep the German version of the IRS at bay.

While the couple has been in Germany since 2018, they were in the U.S. for 10 years prior to their arrival, she said. And Johnson said they plan to return there in two years. 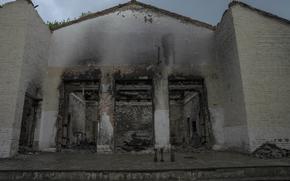