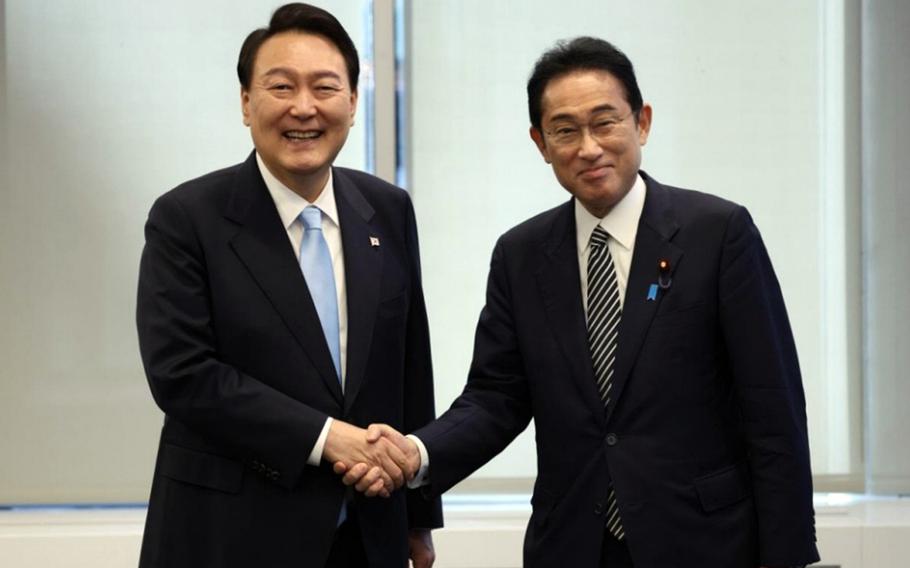 CAMP HUMPHREYS, South Korea — The South Korean military intends to deepen its ties with Japan this year by restarting joint military exercises suspended since 2018, according to Defense Minister Lee Jong-sup.

Lee, in a report Monday by the Segye Ilbo newspaper, said the Ministry of National Defense will promote its security cooperation with Japan this year through joint missile-warning drills, antisubmarine and maritime interdiction exercises, and search-and-rescue training.

“The real-time intelligence operation system among [the United States, Japan and South Korea] will be further upgraded,” he said in the report. “It is our goal to hold the trilateral meeting to hold discussions on it as soon as possible.”

U.S., South Korean and Japanese warships conducted an antisubmarine drill on the East Sea, or Sea of Japan, in September. The drill was “defensive” in nature and a “measure to restore the levels of … trilateral cooperation,” the defense ministry said in a statement at the time.

Lee’s comments are part of South Korea’s broader shift in diplomatic relations with Japan. South Korean President Yoon Suk Yeol, who was inaugurated in May, vowed to mend ties with Japan after a long-standing division between the countries.

The Japanese and South Korean government have historically been at odds over several issues. The two have a territorial dispute over Dokdo, also known as Takeshima, remote islets between South Korea and Japan, and have argued whether Tokyo ought to compensate South Korean forced-labor victims from World War II.

Military relations have also been strained in recent years. In 2018, Japan’s Ministry of Defense said a South Korean navy destroyer pointed a fire-control radar at a Japanese patrol aircraft off the Noto Peninsula, a move described by the ministry as an “extremely hazardous act that may cause unintended consequences.”

Yoon, President Joe Biden and Japanese Prime Minister Fumio Kishida pledged during a summit in Cambodia on Nov. 13 to work together “out of a shared concern for … the nuclear and missile threats North Korea poses,” according to a White House statement that day.