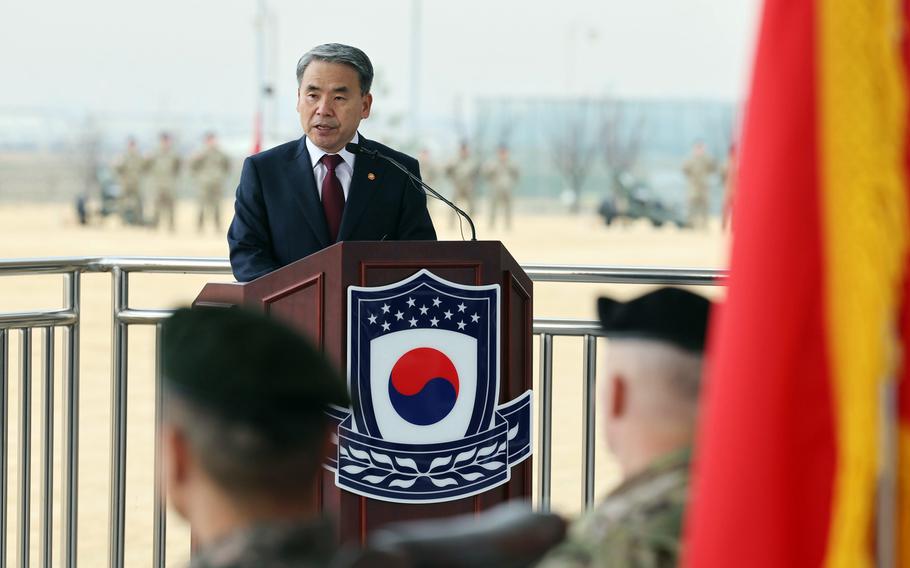 A “peace relying on the other party’s good will can’t last,” Defense Minister Lee Jong-sup said at a news conference in Seoul after meeting earlier in the day with South Korean President Yoon Suk Yeol.

“Such a peace relying on the other party is a peace that can’t last and is a fake peace,” Lee said.

Lee spoke at the Seoul Government Complex shortly after the Ministry of National Defense submitted its annual policy report to the presidential office. The plans lay the groundwork for the South Korean military’s mission for the year and signals the presidential administration’s foreign policy goals.

“The president emphasized that we need to be prepared to exercise the right of self-defense at any time in the event of an adversary’s threat against the freedom and peace of [South Korea],” Lee said.

The South Korean military plans around 20 large-scale drills with the U.S. by June, according to the policy report. Some may be longer in duration and will include more troops than in previous years. The plans also include a tabletop exercise in which the two militaries respond to the use of a nuclear weapon by North Korea.

Yoon restarted much of the joint military drills like Vigilant Storm that were suspended during former South Korean President Moon Jae-in’s administration. In an interview with The Associated Press published Wednesday, Yoon said North Korean provocations will strengthen the South’s resolve.

“The discussions are under way over the so-called joint planning and joint execution, and I think it’s right for South Korea and the United States to cooperate because both of us are exposed to the North Korean nuclear threat,” he told AP.