Joint nuclear exercise with South Korea not on the table, US official says 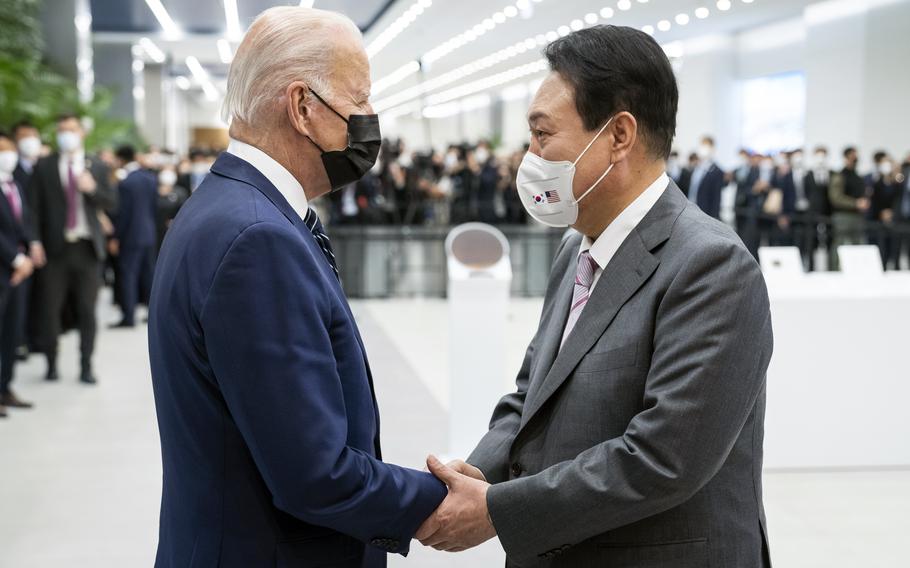 CAMP HUMPHREYS, South Korea — President Joe Biden is in talks with South Korean President Yoon Suk Yeol about a range of responses to North Korea’s nuclear threat but has not discussed holding a joint nuclear exercise with Seoul, according to the U.S. National Security Council on Tuesday.

“The United States is fully committed to our alliance with [South Korea] and providing extended deterrence through the full range of U.S. defense capabilities,” an unnamed National Security Council spokesperson told Stars and Stripes in an email Tuesday.

Biden and Yoon, following a trilateral summit with Japanese Prime Minister Fumio Kishida in November, “tasked their teams to plan for an effective coordinated response to a range of scenarios, including nuclear use by North Korea,” the spokesperson said.

“That is what the teams are working on,” the spokesperson added.

The White House statement came hours after Biden, responding to a reporter’s question as he exited Marine One, said he was not discussing joint nuclear exercises with South Korea.

The president’s short denial at the White House follows Yoon’s interview with the Seoul-based Chosun Ilbo newspaper on Sunday, in which Yoon said South Korea was holding “considerably positive” discussions with the U.S. about “joint exercise concepts” related to nuclear weapons.

“Nuclear weapons are the U.S.’s, but South Korea and the U.S. should work together in planning, information sharing, exercises and training,” Yoon said.

Biden’s response prompted a spokeswoman for Yoon, Kim Eun Hye, to clarify Tuesday that the U.S. and South Korea are discussing ways to deter North Korea from using nuclear weapons, including sharing information and joint planning with concern to U.S. nuclear assets, according to a statement from the South Korean presidential office.

The reporter’s question to Biden about talks on a joint nuclear exercise lacked important context, which led the U.S. president to respond with “no,” according to Kim’s statement.

South Korea does not possess a nuclear weapon. The two Koreas mutually agreed in 1992 not to test, manufacture, or store nuclear weapons in the Joint Declaration of the Denuclearization of the Korean Peninsula agreement.

Despite the agreement, North Korea conducted six nuclear tests, its most recent in 2017, and is believed by U.S. and South Korean officials to have prepared for its seventh detonation. The North fired a short-range ballistic missile toward the East Sea, or Sea of Japan, on Sunday.

The communist regime fired roughly 75 missiles in 36 separate days of testing in 2022, including three short-range missiles on Saturday.