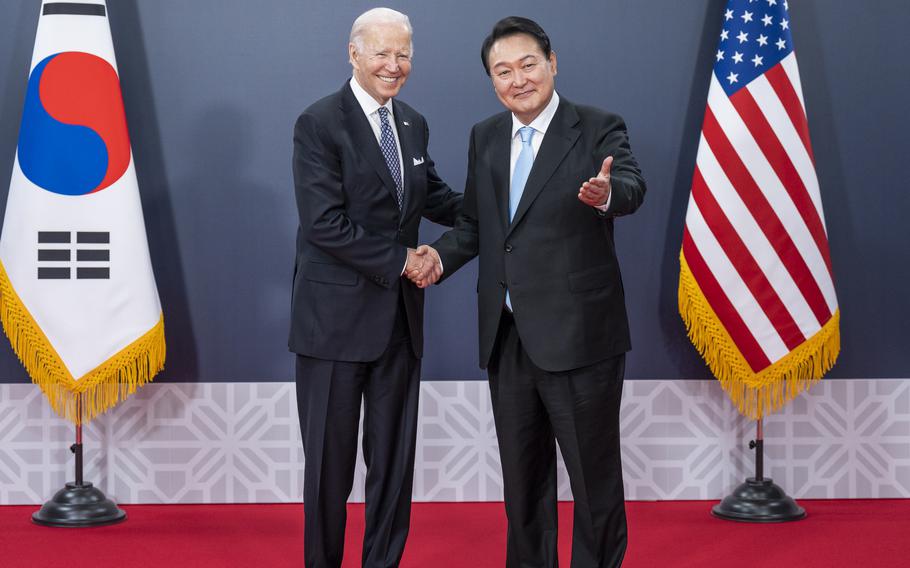 President Joe Biden was photographed with South Korean President Yoon Suk Yeol during a summit in Seoul, May 21, 2022. (Adam Schultz)

“The future of the Indo-Pacific will be determined by our collective efforts to find common solutions to a range of complex challenges and build a sustainable and resilient regional order,” the report, released Wednesday, states. “To do our part, Korea aspires to become a global pivotal state that actively seeks out [agendas] for cooperation and shapes discussions in the region and the wider world.”

Washington responded Wednesday that President Joe Biden’s administration is in lockstep with South Korea’s Indo-Pacific strategy, which outlines the country’s economic, military and social goals in the coming years.

“[South Korea’s] goal to expand its cooperation with other allies and partners across the Indo-Pacific will strengthen our shared ability to advance international peace, security, and promote nuclear nonproliferation,” Sullivan said in the statement. “The strategy will also enhance the region’s economic security networks, cooperation in science and technology, and engagement on climate change and energy security.”

Deputy Secretary of State Wendy Sherman also tweeted on Wednesday: “We look forward to working with our [South Korean] friends to strengthen our alliance and expand our joint efforts in the region.”

Biden’s administration released its own strategy for the Indo-Pacific in February that reaffirmed the U.S. alliance with South Korea, advocated for the removal of nuclear weapons from the Korean Peninsula and called out China’s “bullying” in the region.

The administration’s plan also appealed for greater military cooperation with allies in the region, or “extended deterrence,” to respond to the military threat posed by North Korea.

South Korea’s strategy describes North Korea’s continued missile and nuclear capabilities as “a serious threat to peace and stability” in the world and seeks strengthened ties with the U.S. and Japan, “its closest neighbor,” to address the threat.

“Improved relations with Japan [are] essential for fostering cooperation and solidarity among like-minded Indo-Pacific nations; we are thus continuing our diplomatic efforts to restore mutual trust and advance relations,” the strategy report states.

North Korea fired over 70 missiles in 35 separate days of testing so far this year. U.S. and South Korean officials have warned throughout the year that the communist regime has also prepared to conduct its seventh and first nuclear test since 2017.

“Given the grave, serious challenge posed by North Korea’s nuclear program … we must clearly demonstrate that the international community’s determination to denuclearize the North will always outweigh the latter’s determination to advance its nuclear and missile program,” the strategy states.

The plans reiterate that the “door to dialogue with Pyongyang” remains open and that South Korean President Yoon Suk Yeol’s terms are still on the table.

Yoon unveiled his self-described “audacious initiative” in August, promising economic incentives for North Korea should it take earnest steps toward denuclearization. The communist regime rejected Yoon’s offer to help modernize its agricultural and medical sectors in exchange for scrapping its weapons programs.