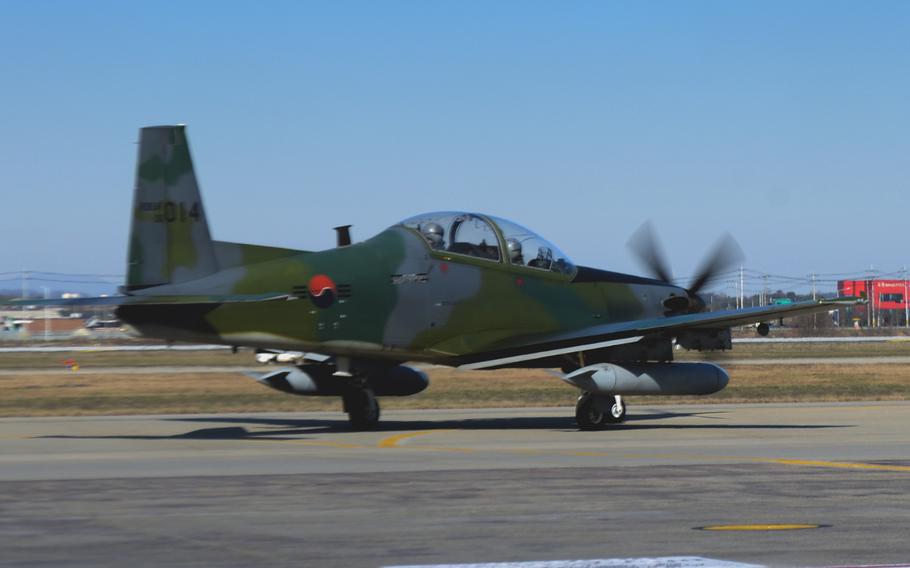 A South Korean KA-1 aircraft, like this one photographed in December 2015 at Osan Air Base, South Korea, crashed on take-off while preparing to intercept North Korean drones near Seoul, South Korea, on Dec. 26, 2022. (Dillian Bamman/U.S. Air Force)

CAMP HUMPHREYS, South Korea — North Korean drones flew across the Demilitarized Zone on Monday and into South Korean airspace for the first time in five years, drawing warning shots from South Korea’s military, according to the Ministry of National Defense.

The first of several North Korean unmanned aerial vehicles were detected at 10:25 a.m. around Gimpo city in Gyeonggi-do, South Korea’s most populous province, the Joint Chiefs of Staff said in a message to reporters on Monday. Gimpo is on the border between the two Koreas and borders Seoul on the northwest.

“Our military will continue to thoroughly and resolutely respond to North Korea’s provocations,” Oh said.

South Korea’s military scrambled fighters, helicopters and other aircraft to respond to the drones, a National Defense Ministry official told Stars and Stripes by phone on the customary condition of anonymity. It was not immediately clear how many drones crossed into South Korea’s airspace and whether they were armed, the official added.

A South Korean air force KA-1 close air support aircraft that responded to the incident crashed during takeoff in Gangwon province, east of Seoul, according to the ministry official. He said no civilian casualties were reported, and the two pilots escaped from the crash and were taken to a hospital.

Flights from airports in Gimpo and nearby Incheon were suspended for roughly an hour, per the request of the South Korean military, according to a Yonhap News report.

The incident marks the first time since 2017 that a North Korean drone was detected in South Korean airspace. That drone, equipped with a camera, was suspected to have been collecting military intelligence, according to the National Defense Ministry at the time.

North Korea has test-fired about 70 missiles in 35 separate days of testing so far this year, a record. Most recently, the communist regime on Friday fired two short-range ballistic missiles into the East Sea, also known as the Sea of Japan.

The two Koreas, which are technically still at war since the signing of an armistice agreement in 1953, have traded sharp warnings this year.

In response to North Korea’s firing of hundreds of artillery rounds and launching dozens of missiles, the South conducted several military drills of its own and displays of force, including a visit by the aircraft carrier USS Ronald Reagan for joint naval exercises and a Busan port visit in the fall.