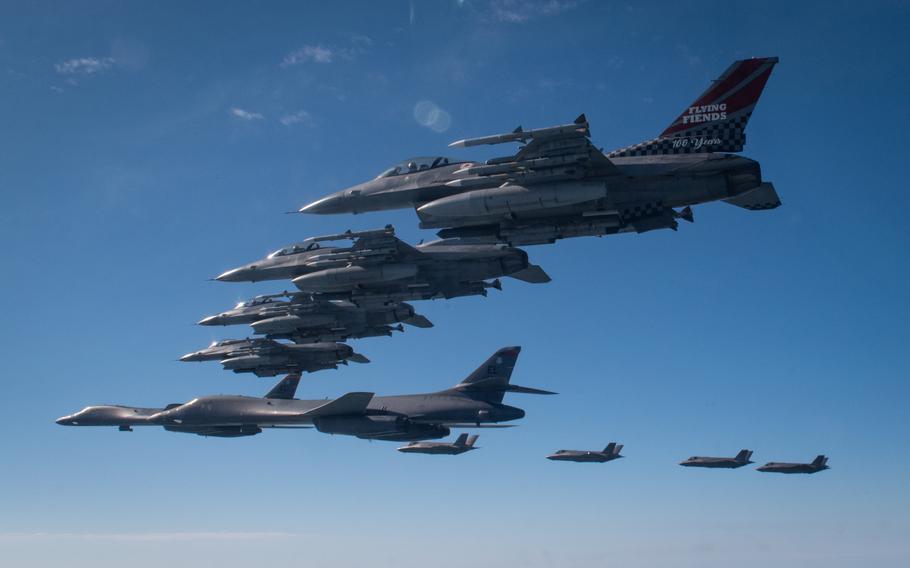 The communist regime launched over 70 missiles in 36 separate days of testing so far this year, an unprecedented pace during South Korean President Yoon Suk Yeol’s first year of his presidency.

Yoon took office in May on a pledge to respond firmly to North Korean provocations and to strengthen the South’s military alliance with the United States. Under Yoon, large-scale military drills with the U.S. have resumed and the South has stepped up its response to North Korea with displays of airpower and by launching missiles and firing artillery of its own.

But Yoon’s military actions have highlighted some of the “inherent risks” in responding to North Korean provocations, Soo Kim, a policy analyst for Rand Corp. and an adjunct instructor at American University, told Stars and Stripes by email on Tuesday.

South Korea on Monday scrambled a small fleet of aircraft to intercept at least five small drones sent by North Korea over the border into an area northwest of Seoul.

Military helicopters from the South fired over 100 machine gun rounds at the drones flying in rural areas, a Ministry of National Defense official told Stars and Stripes by phone on the customary condition of anonymity on Tuesday.

Another aircraft, a South Korean KA-1 light attack plane, crashed during takeoff in Gangwon province. The two-man crew safely ejected, according to a message to reporters Monday from the South Korean Joint Chiefs of Staff.

None of the drones were downed or captured.

The drones were intermittently detected on military radar for roughly five hours starting at 10:25 a.m., a ministry spokesman told reporters Tuesday. He said one drone was detected in northern Seoul and the remaining four were spotted in rural areas along the west coast.

Following the incident, the South Korean military launched its own “corresponding measures” by deploying reconnaissance aircraft beyond the northern border to take photos of military facilities, according to the ministry.

Three months ago, a South Korean short-range ballistic missile fired toward the East Sea, or the Sea of Japan, crashed Oct. 5 near a residential area during a drill in the coastal city of Gangneung. The failed missile was one of several fired by South Korea and U.S. forces after the North launched an intermediate-range ballistic missile over Japanese territory the previous day.

Kim said the drone response and failed missile are reminders of why the U.S. and South Korea militaries exercise together.

“The most recent incident underscores preparation,” Soo said. “To be a passive onlooker while Pyongyang makes incursions into your own territory would send the wrong message to [North Korean leader Kim Jong Un] about Seoul’s ability to stand up for itself.”

Soo added that Monday’s KA-1 crash may have revealed vulnerabilities in South Korea’s defenses and could have “inadvertently given a slight boost to Kim’s confidence.”

Yang Uk, an associate research fellow at the Asan Institute for Policy Studies in Seoul, told Stars and Stripes by phone that while the accidents were unfortunate, they were “vital” to South Korea’s defense.

“By locating and correcting these failures, Korea can be ready for war in real life,” Yang said. “We were unprepared and that’s why [these] incidents happened. The new administration is properly preparing ... by doing a lot of exercises, locating those failures and fixing the problem.”