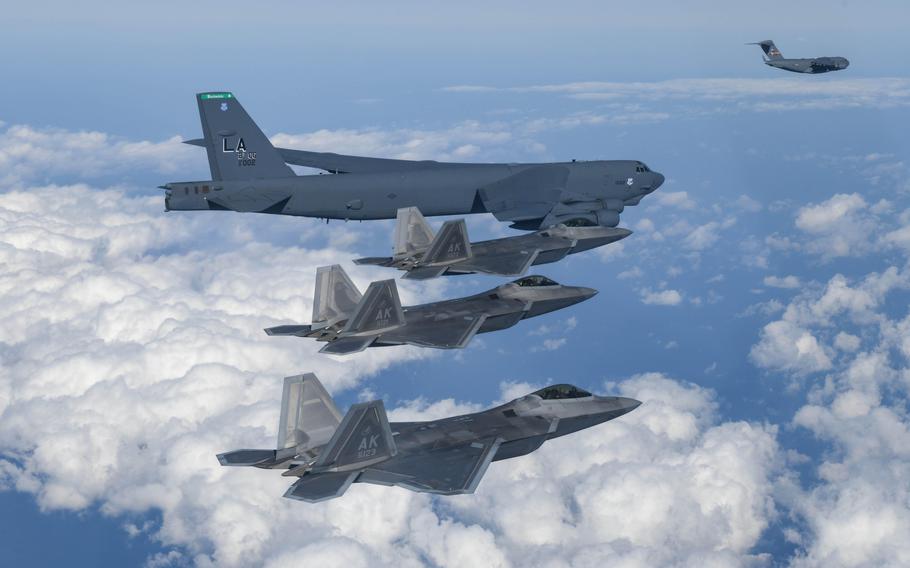 Air Force F-22 Raptors, a B-52 Stratofortress bomber and a C-17 Globemaster are pictured flying for a joint drill with South Korean aircraft over South Korea on Dec. 20, 2022. (South Korea Ministry of National Defense)

Raptors from Kadena Air Base on Okinawa, Japan, arrived in Kunsan Air Base, South Korea, to fly with B-52 Stratofortress bombers and South Korean F-35A Lightning IIs and F-15K Slam Eagles over the Korean Peninsula.

The U.S. fighters and bombers arrived two days after North Korea fired two medium-range ballistic missiles in its 34th round of missile tests this year. The communist regime’s Korean Central News Agency in a report Monday claimed a military satellite was carried aloft and published undated, low-resolution images of the greater Seoul area.

The allies’ air power drills were held to “improve capabilities to respond to North Korea’s nuclear and missile threats,” the National Defense Ministry said on Tuesday,

The U.S. and South Korean aircraft were scheduled to fly again Thursday; however, the plans were called off “due to deteriorating weather conditions,” a Ministry of National Defense official said by phone on Thursday. South Korean officials customarily speak to the media on the condition of anonymity.

A cold snap and heavy snow fell on South Korea throughout the week. The Korea Meteorological Administration warned in a statement that residents should “pay special attention” to frozen water pipes, agricultural products and livestock and fish farms. The temperature on Friday morning dipped to 9 degrees F in Seoul.

South Korean President Yoon Suk Yeol’s office issued an emergency order to prepare for a cold wave and potential damage from snow, according to a statement Thursday. It advised local municipalities to prepare for additional traffic accidents due to an increase in travelers during Christmas week and that military resources would be used if necessary.

The National Defense Ministry on Tuesday released several photos and a video of the drill that showcased a B-52, C-17 Globemaster III airlifter and three F-22s. The Raptors were deployed temporarily at Kadena in early November as part of an Air Force plan to replace the F-15 Eagle fighters long stationed on Okinawa.

U.S. Forces Korea does not comment on the number of aircraft used in joint exercises with South Korea due to operational security, spokesman Wesley Hayes said by email Tuesday.