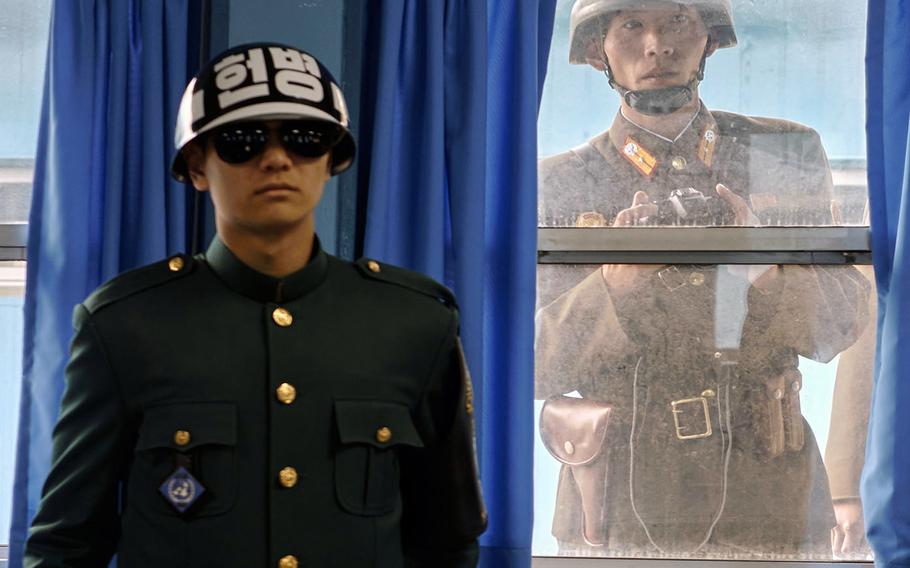 CAMP HUMPHREYS, South Korea — South Korea sending surveillance drones into North Korea last month was an act of self-defense and not a violation of the 69-year-old armistice agreement between the two countries, a spokesman for the South’s military said Monday.

The South Korean military flew its drones north of the border after North Korean drones were detected flying in the South for roughly five hours on Dec. 26, Jeon Ha Gyu, spokesman for the Ministry of National Defense, told reporters at a briefing in Seoul.

The North Korean incursion was a “provocative act … which is a flagrant breach of the armistice agreement,” Jeon said.

“We took a proportional action against North Korea’s flagrant military provocation, and this is a countermeasure taken at the self-defense level,” he said. “As far as we know, an action being taken in defense is a lawful right guaranteed by the U.N. Charter and it is not limited by the armistice agreement.”

Jeon said the ministry deemed that the armistice agreement is superseded by the U.N. Charter, which allows member countries to exercise their right of self-defense.

The five North Korean drones detected over South Korea, including Seoul, were the first since 2017, according to the South’s military. South Korea failed to capture a drone but responded to the incursion the same day by sending its own surveillance drones to photograph military installations north of the Demilitarized Zone, the border between the two Koreas.

One day after the incident, South Korean President Yoon Suk Yeol directed the military to create a unit dedicated to combatting drones and vowed to respond to future incursions with corresponding measures.

The Ministry of National Defense publicly apologized for failing to bring down the North Korean drones and held several anti-drone drills last week.

Article 51 of the U.N. Charter states that “nothing in the present Charter shall impair the inherent right of individual or collective self-defense if an armed attack occurs against a member of the United Nations, until the [U.N. Security Council] has taken measures necessary to maintain international peace and security.”

The armistice agreement signed July 27, 1953, marked an end to three years of fighting during the Korean War and drew boundaries between the two countries. In 2018, military officials from North and South Korea signed a separate, inter-Korean agreement that reaffirmed the cessation of all hostile acts on land, air and sea.

Following a meeting with senior officials on Wednesday, Yoon suggested suspending the 2018 agreement due to military action by the North, according to a news release from the presidential office.

North Korea fired over 70 missiles in 36 separate days of testing in 2022, an annual record. The communist regime last fired one short-range ballistic missile on Jan. 1.