Security situation in Indo-Pacific is relevant to Germany, officials say in Tokyo 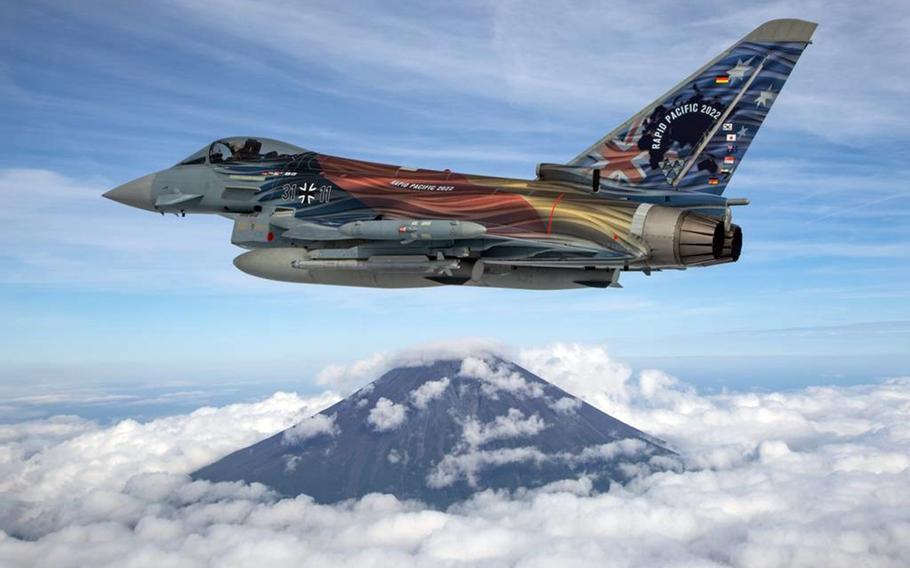 TOKYO — Though the German military has prioritized keeping a close watch on the war in Ukraine, the country aims to demonstrate through frequent Indo-Pacific deployments that this region is a concern, too.

German warplanes are deployed to NATO’s eastern flank to make clear to Russia that the alliance’s territory is a red line, Lt. Gen. Ingo Gerhartz, who leads the country’s air force, told journalists at the Foreign Correspondents’ Club of Japan in Tokyo on Thursday.

“We will defend it if somebody attacks it,” he said.

At the same time, Germany is sending forces elsewhere, including to the Indo-Pacific, where there’s the potential for conflict amid China’s rapid military buildup.

Thirteen German warplanes, including fighters, tankers and transports, have been carrying out a mission called Rapid Pacific since summer.

They kicked things off by participating in Australia’s Pitch Black exercise, which involved 100 aircraft from 17 nations, including the United States, between Aug. 19 and Sept. 8. The drills prepare air forces to work together in large-scale aerial combat by day or night.

Three German Eurofighter Typhoons involved in Rapid Pacific, including one piloted by Gerhartz, flew from Singapore to Japan on Wednesday.

The jets linked up with Mitsubishi F-2 fighters, including one piloted by the chief of the Japan Air Self-Defense Force, Gen. Shunji Izutsu, and circled Mount Fuji the same day, Gerhartz said. The Eurofighters landed at Hyakuri Air Base northeast of Tokyo. The German air force tweeted that one of its tankers also visited Japan that day.

Gerhartz said the recent three-day mission, which included training aimed at improving communication and tactical skills, involved only German and Japanese forces. The Germans were also interested in hearing about Japan’s experiences with the F-35A Lightning II stealth fighter, which Germany is also procuring, he added.

Japan has been a popular destination for foreign militaries, as of late. The German frigate Bayern made a port call in Tokyo last year after sailing through the South China Sea and training with the Japanese Maritime Self-Defense Force. Other European nations, such as France the United Kingdom, have also sent aircraft and warships sent to the Far East this year and last.

Next summer, German soldiers will travel to Australia for the biennial Talisman Sabre exercise, which typically involves tens of thousands of U.S. and Australian troops. The training is designed to test troops’ readiness to fight together on land, air and sea, according to the Australian Defence Force.

Tension has been rising in the region as China rapidly expands its navy, builds military facilities on disputed islands in the South China Sea and threatens to invade Taiwan.

However, the German deployment to the Pacific doesn’t target China, Gerhartz said.

“It is not a signal against anybody,” he said. “It is a signal in favor of our partners here, our partners who share the same values as us. We did not provoke anybody.”

Asked whether Germany would defend Taiwan if it is attacked by China, Gerhartz said: “I don’t see any military option here at all. This has to be a political and diplomatic solution.”

During Thursday’s press conference, German Ambassador to Japan Clemens von Goetze called the U.S., which has more than 50,000 troops stationed in Japan, an important security partner and that diplomats from the two allies have strong contact in the region.

“In the Indo-Pacific, we want to show with this deployment, both of the frigate and of the aircraft, and others – other deployments will follow in the future, that has been made clear – that the security situation in the region is relevant to us,” he said.

The German navy will be back in the region in 2024, Gerhartz added.