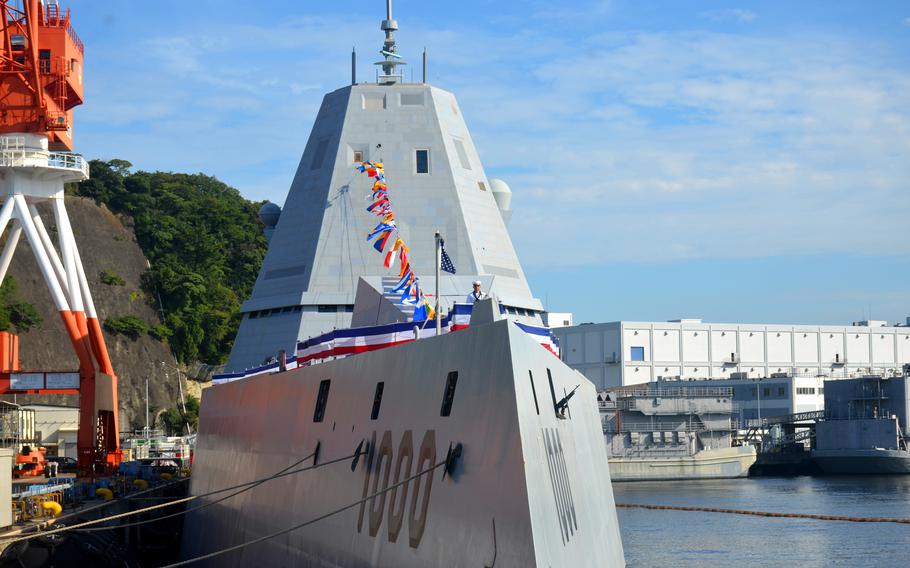 The USS Zumwalt, the lead ship of its class and one of the Navy's newest destroyers, arrived at Yokosuka Naval Base, Japan, Monday, Sept. 26, 2022. (Alex Wilson/Stars and Stripes)

YOKOSUKA NAVAL BASE, Japan ⁠— One of the Navy’s newest warships, the guided-missile destroyer USS Zumwalt, docked this week at the homeport of the U.S. 7th Fleet, marking the vessel’s first-ever visit to Asia.

The lead ship of the Zumwalt-class guided-missile destroyers steamed into Yokosuka on Monday for a “routine port call” after spending 13 days at Naval Base Guam, Task Force 71 spokeswoman Lt. Katherine Serrano told Stars and Stripes.

The Zumwalt arrived in Guam on Sept. 6, another first for the ship, Task Force 71 spokesman Lt. Cmdr. Joseph Keiley told Stars and Stripes by phone Thursday.

The ship’s time in Guam was considered a working visit, but sailors also had the chance to visit local attractions, according to a Sept. 19 news release from Task Force 71.

Zumwalt’s arrival in Japan also marks the farthest it has traveled from its homeport, Naval Base San Diego, a record previously set in Guam, the release said. 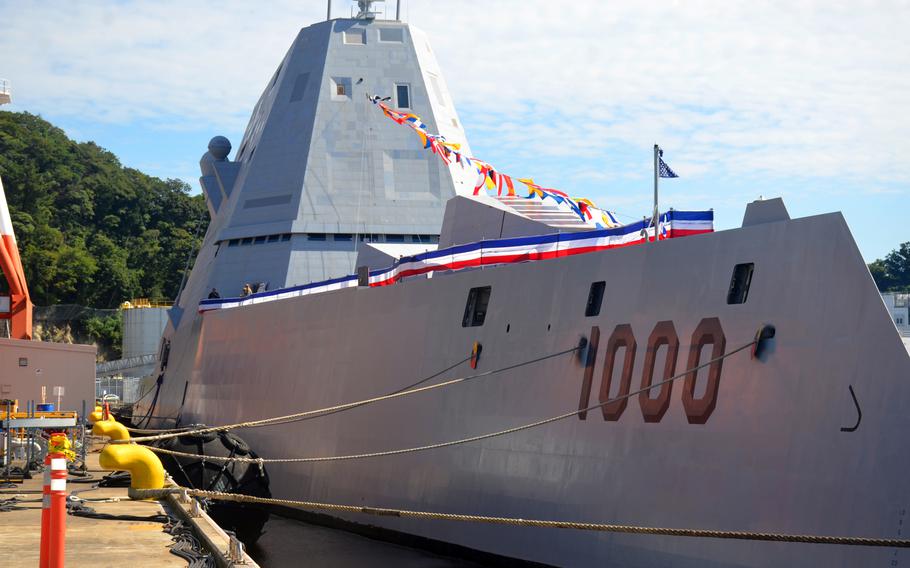 The USS Zumwalt, the lead ship of its class and one of the Navy's newest destroyers, arrived at Yokosuka Naval Base, Japan, Monday, Sept. 26, 2022. (Alex Wilson/Stars and Stripes)

The Zumwalt’s crew is fully vaccinated, and the sailors are free to explore Japan provided they abide by COVID mitigation policies, Serrano wrote in an email Thursday.

“While in Yokosuka, Sailors will be afforded the opportunity to enjoy liberty and experience Japanese culture,” she said.

She declined to comment on the destroyer’s length of stay or future destinations as a matter of policy.

“Zumwalt is currently conducting operations and engagements in the Indo-Pacific region,” she said. “DDG 1000 plays an integral role in maintaining our competitive edge and assuring our allies and partners in the region."

The ship arrived in Japan at nearly the same time as Vice President Kamala Harris, who landed at Yokota Air Base in western Tokyo on Monday for a four-day visit that included the state funeral of slain former Prime Minister Shinzo Abe and visits with Japanese, Korean and other heads of state.

On Wednesday, the vice president visited Yokosuka, where she boarded the destroyer USS Howard, docked adjacent to the Zumwalt, and gave a speech that addressed the region’s growing tensions with China and North Korea.

The Zumwalt entered the fleet in April 2019, 2 ½ years after it was commissioned in October 2016. Soon after the commissioning, Congress prohibited the Navy from taking delivery of a vessel not fully outfitted to its combat capacity, according to an April 2020 USNI News report.

The Navy originally planned to put 32 Zumwalt-class destroyers to sea, a number trimmed to three as the price of each ship, an estimated $8.1 billion, grew after 2005, according to 2008 and 2018 reports from the Government Accountability Office.

Originally planned to be used for shore bombardment, high costs of munitions for the ships’ original 155 mm main armament added to the Navy’s decision in December 2017 to change its mission to surface warfare.

The Navy has since decided to replace the two 155 mm cannons with tubes able to accommodate hypersonic missiles, USNI reported in August.

The destroyer, according to the Navy, is equipped for control of the sea, power projection, deterrence and command and control missions.

It is designed to operate in open-ocean and near-shore environments.