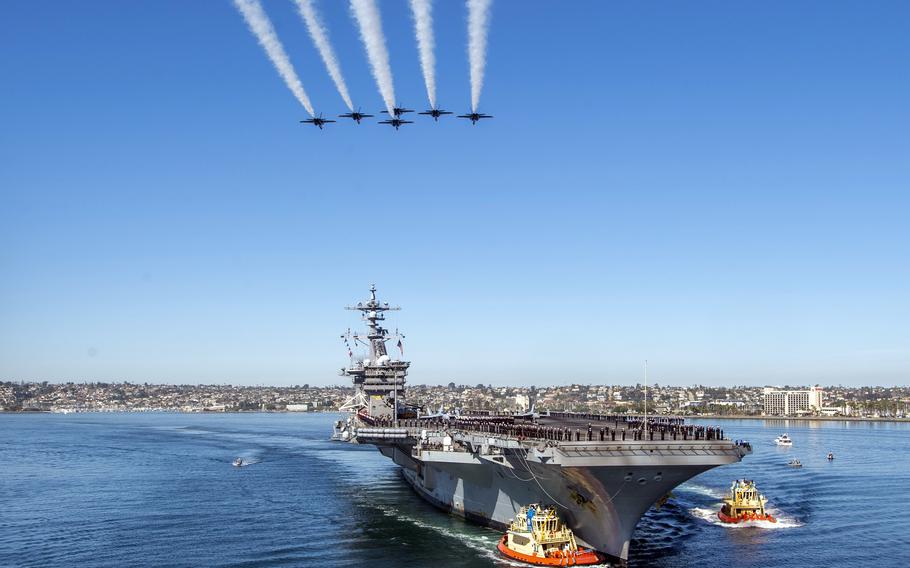 The U.S. Navy's Blue Angels fly in formation over the aircraft carrier USS Carl Vinson as it returns to San Diego on Monday, Feb. 14, 2022, after eight months at sea. (Cody Deccio/U.S. Navy)

The aircraft carrier USS Carl Vinson and its strike group returned Monday to San Diego, its homeport, putting an end to an eight-month deployment filled with success and something short of it.

The ship put the fifth-generation F-35C Lightning II stealth fighter to work aboard a carrier for the first time. It also logged five aircraft mishaps while patrolling the Indo-Pacific region, one involving an F-35 that collided with the flight deck and skidded into the sea.

None of the incidents were fatal, although the $103 million aircraft’s loss injured seven sailors, according to Navy statements.

The Carl Vinson carried more than 70 advanced aircraft, including the F-35s, but also EA-18G Growlers, CMV-22B Ospreys and E-20 Advanced Hawkeyes, a collection the Navy dubbed “the air wing of the future.”

All the strike group aircraft, Carrier Air Wing 2, flew more than 15,000 flight hours across 7,791 sorties, according to a Tuesday news release from 3rd Fleet. Those included 7,702 launches and 7,761 aircraft arrests on the flight deck.

The Carl Vinson’s skipper, Capt. P. Scott Miller, commended the strike group’s more than 7,000 sailors for their efforts during the lengthy deployment, which concluded on Valentine’s Day.

“The tireless dedication and professionalism of our sailors, through a global pandemic, challenging operational tempo, and sacrificed time away from family, is truly humbling,” Miller said in the release. “Their efforts have demonstrated flexibility and resiliency and ensured mission success in every task.”

A spokesperson for the 3rd Fleet did not immediately return an email request for comment Tuesday on the deployment.

On Jan. 24 in the South China Sea, an F-35C struck the flight deck on approach, caught fire, skidded across the carrier and plunged into the water, according to a video of the incident posted on social media.

The Navy announced plans to salvage the aircraft and its trove of advanced technology. Three injured sailors were treated in Manila, the Philippines, and released in stable condition; four others were treated aboard the Carl Vinson.

No sailors were injured in the mishaps. In the case of the Seahawk, the helicopter was lost, Carrier Strike Group 1 spokeswoman Lt. Cmdr. Christina Gibson told Stars and Stripes in a Feb. 15 email.

Mishaps aside, the strike group marked a series of accomplishments, according to a Navy news release marking its return to port.

After leaving San Diego on Aug. 2, the strike group steamed more than 80,000 nautical miles over 262 days. It took part in massive drills, including the global Large Scale Exercise 2022, Operation Malabar and ANNUALEX 2021. It sailed alongside allied navies from Australia, Germany, India, New Zealand and Japan.

In June, the Carl Vinson and its escorts drilled 400 miles west of Hawaii with Navy, Marine Corps and Coast Guard units while nearby the Russian navy practiced missile attacks on a mock carrier strike group.

“Alongside our partners and allies, we have aggressively pursued every opportunity to elevate our combat readiness in a drive to continue upholding regional stability,” Rear Adm. Dan Martin, commander of Carrier Strike Group 1, said in the news release. “We’ve been doing this for 75 years and I’m proud to say that our team has relentlessly paid tribute to this legacy with many long hours of sweat and determination that started well before we left San Diego.”