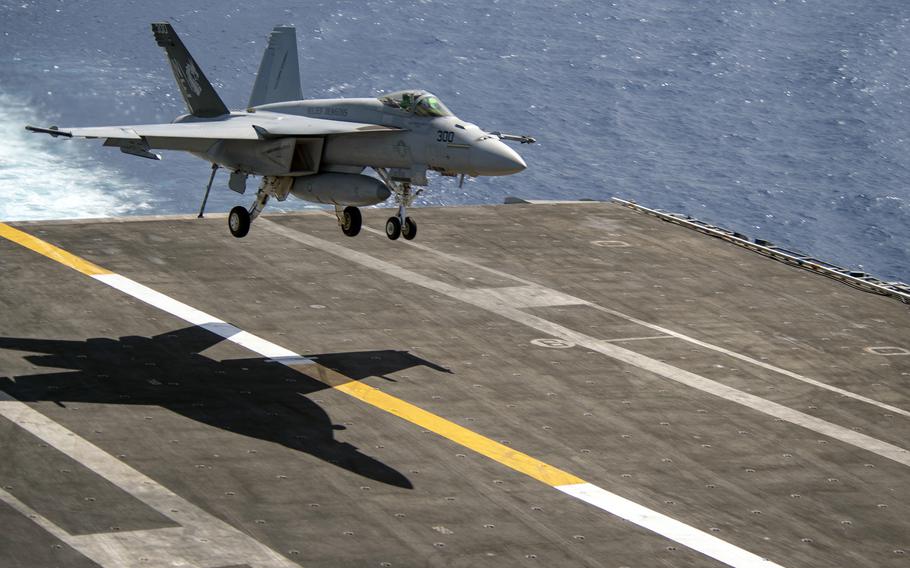 The aircraft carrier USS Carl Vinson and its strike group are now operating in the contested South China Sea alongside a Japanese helicopter destroyer, the Navy said Monday.

The strike group and the JS Kaga of the Japan Maritime Self-Defense Force are conducting flight operations, tactical training between surface and air units and maritime strike exercises, the Navy said in a news release.

This marks the first time the Carl Vinson has operated alongside a Japanese vessel in the South China Sea since it deployed from San Diego in early August.

Japan’s helicopter destroyers are small helicopter carriers. One, the Izumo, has been improved to accommodate F-35B short-takeoff and vertical-landing F-35B Lightning II stealth fighters. The Kaga is scheduled for the same treatment.

The Carl Vinson arrived from the Indian Ocean, where last week it wrapped up the second phase of Exercise Malabar with naval forces from the United States, India, Australia and Japan.

The Vinson strike group was last in the South China Sea in September.

The carrier USS Ronald Reagan and its strike group also exercised in late September in the South China Sea on its way back to its homeport in Japan after being deployed to the Middle East.

In early October, the Reagan and Vinson strike groups also teamed up with the Royal Navy carrier strike group led by the HMS Queen Elizabeth and the Japanese helicopter carrier JS Ise for exercises in the Philippine Sea.

The Navy has maintained a high – and highly publicized – operations tempo for the past 18 months both in the South China Sea and through the Taiwan Strait.

China maintains it has sovereignty over a huge swath of the sea in disputes with other claimants in Southeast Asia, such as Vietnam, Philippines and Malaysia.

Beijing has also long asserted that Taiwan is a renegade province that must be eventually reunified with the mainland.

China has ratcheted up the pace of fighter jet sorties into Taiwan’s airspace in recent months, while the U.S. Navy has been sending warships through the strait roughly once a month to demonstrate U.S. resolve in what the Pentagon routinely calls “operations in support of a free and open Indo-Pacific.”

The Navy described the operations by the Carl Vinson and the Kaga as part of its “routine presence” in the region.

“Bilateral operations are one key component in our collective maritime readiness,” Rear Adm. Dan Martin, commander of Carrier Strike Group 1, said in the release. “The Indo-Pacific is a dynamic region and by continuing to conduct routine operations with our allies and partners throughout international waters and airspace, we demonstrate our unwavering commitment to upholding international law, on the sea and in the air, and to ensuring that all nations can do the same without fear or contest.”

The Carl Vinson is the first U.S. carrier to be retrofitted to handle fifth-generation F-35C fighters and the tilt-rotor Ospreys. The ship completed the 17-month upgrade in the summer of 2020.