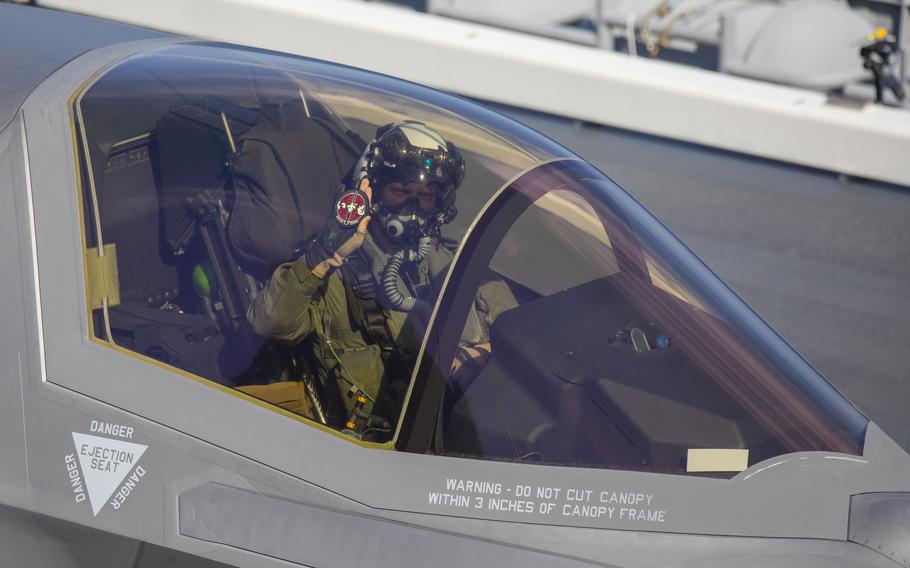 TOKYO – Hovering an F-35B Lightning II over the JS Izumo in the Pacific Ocean, a Marine Corps test pilot pushed his control stick forward and lowered the stealth fighter onto the warship’s deck.

The Oct. 3 landing – the first aboard a Japanese carrier by a fixed-wing aircraft since World War II – “felt identical” to those on U.S. vessels, Lt. Col. Robert Guyette told Stars and Stripes in a phone interview Wednesday.

It’s a familiar feeling for Guyette, 41, the executive officer for Marine Fighter Attack Squadron 242 at Marine Corps Air Station Iwakuni. The Phoenix native has flown all three variants of the F-35 since transitioning from F/A-18 Hornets in 2012.

“I did a lot of testing for the U.S. ships,” he said of the short takeoff, vertical landing F-35B.

Pilots typically hover 40-70 feet above a ship before touching down, according to Guyette.

“It is surprisingly easy,” he said of the steps needed to execute a carrier landing in an F-35B. “It’s simply pushing the stick forward to go down.” 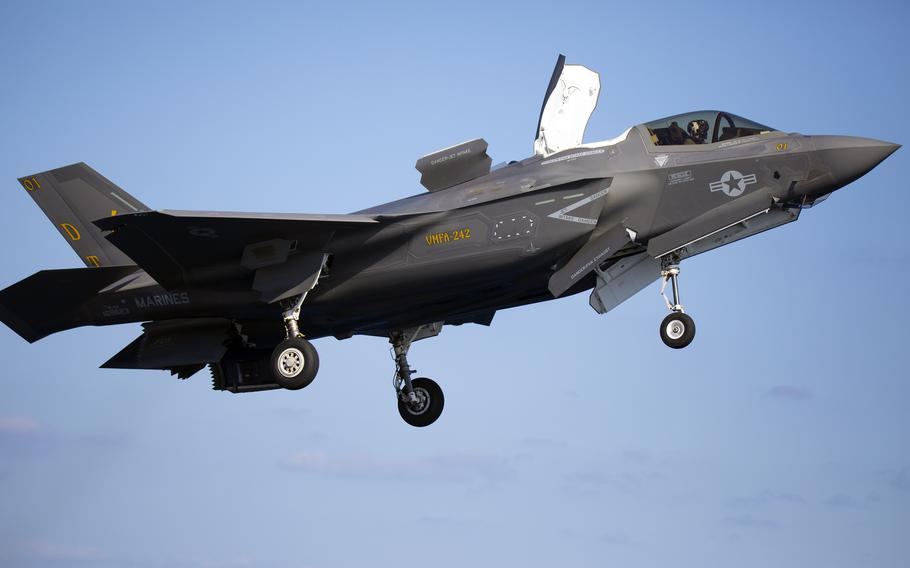 Sailors from the USS America amphibious assault ship were on the Izumo’s deck helping guide Guyette and his wingman, Maj. Nicholas Dylan, as they landed and launched their fighters once each during the test.

Conditions off the southeast coast of the Japan on Sunday weren’t particularly challenging, Guyette said. There were no high winds or sea swells.

“I’ve worked with the America crew before in much more aggressive environments such as rough sea and at night,” he said.

The focus of Sunday’s test was on capturing data for the Japanese, including the amount of heat generated by the jet’s engines on the Izumo’s deck.

There wasn’t an opportunity to hop out and tour the ship, Guyette added.

“My focus was on just executing my checklist and taxiing the aircraft into the launch position,” he said.

There also wasn’t time to ponder the historical significance of the operation.

“I don’t know that it’s at the Chuck Yeager level, but there was a fair amount of work that went into making this happen,” Guyette said, name-dropping the legendary Air Force test pilot who was first to break the sound barrier in 1947.

Staff at the U.S. Embassy in Tokyo and members of the Japan Maritime Self-Defense Force did a lot of preparation ahead of the landing to make sure the test was effective and safe, Guyette said.

“As a test pilot, to do something for the first time and make it look like it’s easy, and it was because of all the preparation, that’s pretty cool,” he said.

The Izumo is the latest non-U.S. warship to host the F-35B. The Marine Corps jets have been deployed to the Pacific with the Royal Navy’s HMS Queen Elizabeth aircraft carrier and U.S. jets conducted sea trials aboard the Italian carrier Cavour this spring.

MCAS Iwakuni aviators have also been working with Japan Air Self-Defense Force F-35A pilots from Misawa Air Base, Guyette said. The Air Force’s version of the joint strike fighter is capable of conventional takeoffs and landings.