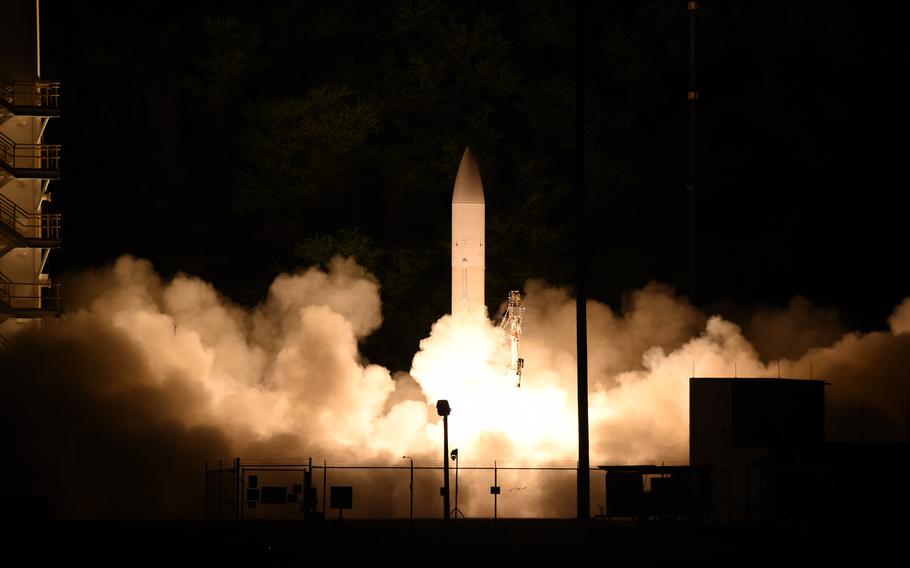 FORT SHAFTER, Hawaii — The Pentagon is continuing to delay development of a Hawaii-based missile defense radar as it considers changes to the “threat landscape” in the Pacific, despite a mandate from Congress that it be built and operating by 2028.

The 2022 National Defense Authorization Act, passed late last year, included $75 million for the radar, which would be capable of identifying and classifying specific missile threats.

The NDAA calls for the director of the Missile Defense Agency to certify that its program “includes adequate amounts of estimated funding to develop, construct, test, and integrate into the missile defense system the discrimination radar for homeland defense planned to be located in Hawaii.”

The Defense Department in 2020 dropped plans to build a $1 billion missile tracking system in Hawaii and a second location in the Pacific that had not been determined.

The Missile Defense Agency had spent the prior two years studying three possible sites on Oahu and another at the Pacific Missile Range Facility at Barking Sands on Kauai Island’s west coast. Oahu residents had pushed back on the proposed sites over concerns about culturally sensitive areas and overdevelopment.

“The defense of Hawaii remains a top priority for the Department of Defense,” Pentagon spokesman Christopher Sherwood wrote in a statement to Stars and Stripes on Feb. 9.

The “threat landscape,” however, has changed significantly since the early planning stages of the Homeland Defense Radar-Hawaii, or HDR-H, Sherwood said.

The Defense Department’s top priority in missile defense in the Pacific is now Guam, said Riki Ellison, founder and CEO of the Missile Defense Advocacy Alliance, a non-partisan organization that supports defense systems.

“The threat is not on Hawaii like it’s on Guam right now,” he said during a phone interview Tuesday.

North Korea conducted a spate of missile tests last month after a lengthy hiatus of such provocations, and China is far along in the development of hypersonic ballistic missiles.

“The North Korea tests have been short range — medium range at best,” Ellison said. “The ranges tested in January could shoot as far as Guam, not as far as Hawaii.”

Meanwhile, in the emerging competition between China and the United States, Guam would play an outsized role in any military conflict between the two superpowers.

The small U.S. territory is roughly 2,000 miles west of Hawaii and much closer to the hot zone of the South China Sea. It hosts bases for the U.S. Air Force and Navy, with a major Marine Corps base now under construction.

The White House’s proposed budget for the next fiscal year, anticipated to be released within the next month, is expected to lay out a five-year funding plan for the missile-defense architecture for Guam, Ellison said.

“It’s going to have multiple radars, multiple shooters,” he said.

For two months last fall, the Army tested Israel’s Iron Dome missile defense system on Guam to see how well it could integrate with existing defenses.

Whatever kind of missile defense system Guam ends up with, it would play an important role in also defending Hawaii from attack, Ellison said.

Still, Hawaii’s congressional delegation has not given up the quest for the Homeland Defense Radar-Hawaii for protecting key military sites in the state, such as the headquarters for U.S. Indo-Pacific Command, U.S. Pacific Fleet and U.S. Army Pacific.

“HDR-H is needed now to protect these defense assets plus some 1.4 million Americans living in Hawai‘i to include some 100,000 military and [affiliated personnel] and their families,” Rep. Ed Case of Hawaii said in an emailed statement Tuesday.

Case sits on the House Appropriations Committee and was instrumental in including the $75 million in funding after the White House’s budget had excluded it earlier.

He said he would continue to provide the funding necessary for the Defense Department to “fully comply” with the mandate to complete the Hawaii radar by 2028.