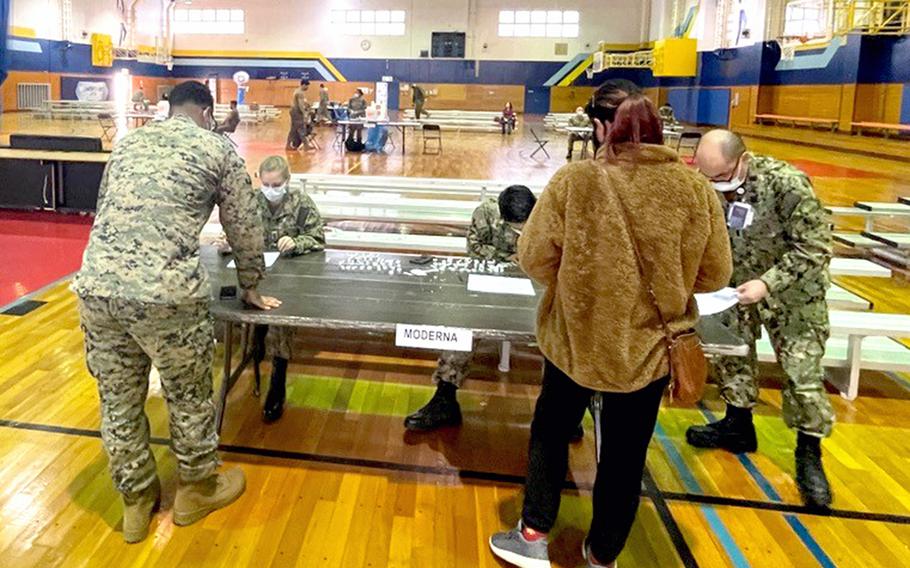 TOKYO – Japan’s capital city reported its highest one-day new case number of the pandemic, 8,638, on Thursday as it reimposed coronavirus restrictions approved by the central government, according to Japanese media reports.

The new record in Tokyo supplants one set Wednesday at 7,377. The seven-day rolling average of new coronavirus cases that day was nearly 4,600, according to Tokyo Metropolitan Government data.

Nearly 40% of available hospital beds in the city were filled, far above the 20% threshold Tokyo Gov. Yuriko Koike set for the imposition of measures aimed at curbing the virus’ spread.

U.S. Forces Japan on Thursday reported that 434 people had tested positive for COVID-19 at 17 bases across Japan. Another 12 individuals were pending confirmation. One person is hospitalized; no cases are considered severe. The command reported 331 infections Wednesday.

Marine Corps Air Station Iwakuni near Hiroshima topped the list with 82 new cases. Kadena Air Base on Okinawa and Yokosuka Naval Base south of Tokyo came next with 74 new cases each, according to USFJ’s Thursday update.

U.S. Army Japan, headquartered at Camp Zama southwest of Tokyo, on Thursday said another 159 people had contracted COVID-19 between Jan. 12 and Wednesday, according to an Army news release. Seventy had fallen ill before testing positive and 64 were close contacts.

Another 15 were recent arrivals to Japan and still in restricted movement, according to the Army. The remaining three turned up in screening tests.

MCAS Iwakuni, 25 miles south of Hiroshima and a COVID-19 hotspot early in January, reported 77 people tested positive Wednesday and five Thursday, according to a base news release. The air station has reported 851 infections this month.

U.S. servicemembers, civilian employees, family members and Japanese health care workers on base lined up Wednesday at the Iron Works gym for a booster shots of the Moderna and Pfizer vaccines.

“I recently had COVID, and my symptoms were not that severe,” Marine Lance Cpl. Franklin Padilla told Stars and Stripes at the line. “It gives me peace of mind knowing that getting the shots, if I get COVID again the symptoms will be much milder than if I didn’t get vaccinated.”

At a COVID-19 task force meeting Wednesday, Japanese Prime Minister Fumio Kishida declared a quasi-emergency for Tokyo and 12 other prefectures, including three surrounding the city. The emergency takes effect Friday until Feb. 13, he said. Prefectural governors may set measures to fit local circumstances, according to the order.

Shigeru Omi, chairman of the government advisory panel that recommended the emergency declaration, told reporters that rather than restraining the movement of people outside their homes, the measures should focus on limiting the size of groups at bars and restaurants, according to the Asahi newspaper on Wednesday.

The metro government also asked residents to stay home as much as possible and avoid crowded areas.