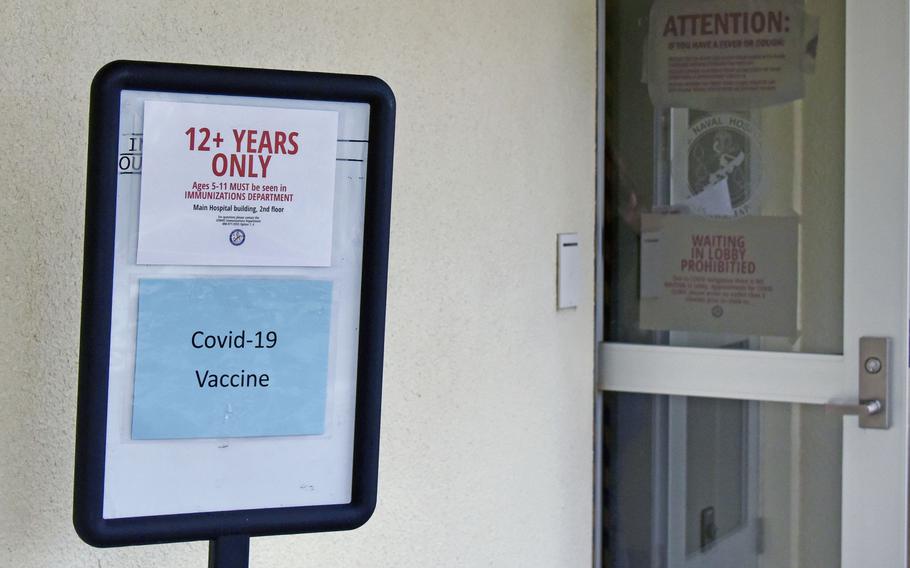 As of Jan. 12, 2022, nearly 8,200 sailors remained unvaccinated, according to the most recent update to the Navy’s COVID-19 online tracker. (Frank Andrews/Stars and Stripes)

The Navy has opened a fast lane to discharge for sailors who refuse a COVID-19 vaccine, to “maximize speed and equity in achieving a fully vaccinated force,” according to the chief of naval personnel.

Sailors eligible to exit active duty by June 1 and who refuse the vaccine will be discharged honorably under an expedited process, barring special circumstances, according to a naval administrative message Dec. 15. To qualify, sailors must be eligible for separation, retirement or transfer to the Reserve on or before June 1.

“In order to ensure a fully vaccinated force, U.S. Navy policy is, first, that all Navy service members receive the vaccine as directed and, second, that any who refuse the vaccine be processed for separation at the earliest possible opportunity,” the chief of naval personnel, Vice Adm. John B. Nowell Jr., wrote in Naval Administrative Message, or NAVADMIN, 283/21.

As of Jan. 12, nearly 8,200 sailors remained unvaccinated: 5,209 active-duty sailors and 2,968 in the Ready Reserve, according to the most recent update to the Navy’s COVID-19 online tracker. The service had nearly 347,300 sailors in November, according to the Defense Manpower Data Center.

Even though the vaccination deadlines have passed, the discharge process will pause or stop for sailors who get vaccinated and report their status through their chains of command, according to the Navy’s Sailor-to-Sailor newsletter earlier this month. Nov. 28 was the vaccination deadline for active-duty sailors, and Dec. 28 for Ready Reserve sailors.

“While the vast majority of Navy service members have already received the vaccine, it remains in the interest of the Navy to encourage remaining Navy service members to become fully vaccinated as soon as possible and, at such time, consider them for retention,” Nowell wrote in the message.

Sailors who have applied for a vaccine exemption will not be processed, but if denied an exemption they must start their vaccinations within five days or face discharge, according to the message.

Since Jan. 12, the Navy has issued 640 exemptions: eight permanent and 244 temporary medical exemptions and 68 for administrative reasons, according to the Navy’s online tracker. Of the 3,038 requests from active-duty sailors for religious exemptions, the Navy has granted none.

The Air Force and Army have also not approved any requests for vaccine waivers on religious grounds, as of Monday.

Information on waiver requests to the Coast Guard and Marine Corps was not immediately available.

The December administrative message laid out the guidelines for discharging sailors who refuse the vaccine. Some terms may be costly to individual sailors.

Officers who refuse the vaccine but have not yet completed their service obligation may be required to repay their educational expenses at the Naval Academy or through ROTC scholarships.

No service member discharged for refusing a vaccine is eligible for involuntary separation pay, according to the message.

Officers and enlisted sailors with more than six years’ service could be given a general discharge under honorable conditions for refusing the vaccine if they the opt for a board of inquiry or administrative separation board, the message states. They may waive their board options in exchange for an honorable discharge.

Sailors with less than six years’ service may expect an honorable discharge.