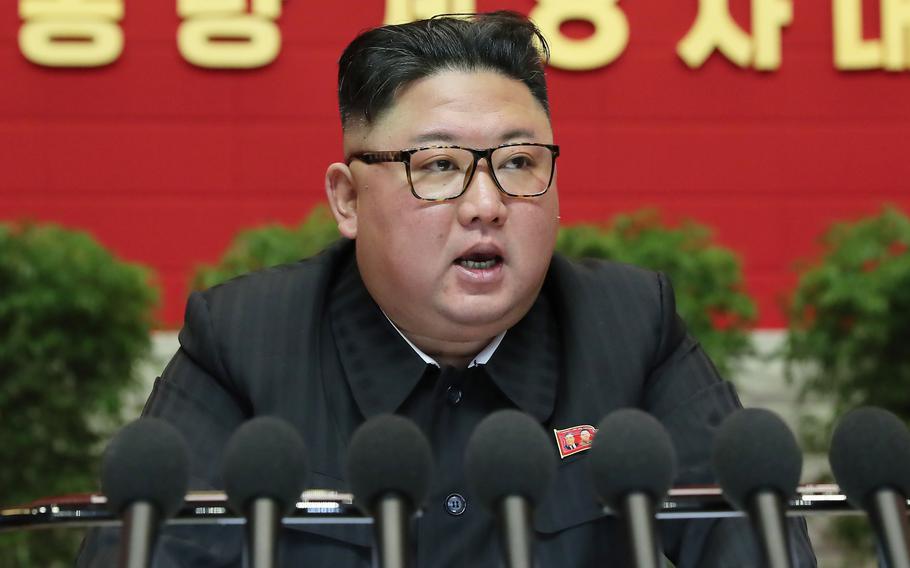 Kim Jong Un, leader of North Korea, speaks during the eighth Congress of the Workers’ Party of Korea on Jan. 9, 2021, in Pyongyang, North Korea. (KCNA/Xinhua via Zuma Press/TNS)

TOKYO — North Korea restored a hotline this week to bring back another avenue for dialogue with Seoul. And South Korea and its allies are trying to decipher what Kim Jong Un’s regime wants to say.

There is the return of missile tests — at least four in four weeks — that suggest Kim wants U.S. attention and is keeping to his pledges to expand his arsenal, including tests of what North Korea claimed was a new hypersonic missile.

But then there are hints of outreach: the restoration of the hotline Monday and Kim’s increasingly powerful sister, Kim Yo Jong, dialing down the North’s rhetoric at the United Nations.

“Long time no talk,” a South Korean official said on Monday’s call with his North Korean counterpart, according to a video released by the South Korean Unification Ministry. “We’re very pleased to restore communication channels like this. We hope that South-North relations will develop to a new level.”

Still, North Korea’s current code is hard to crack. It may even signal a larger policy shift, according to regional analyst Robert Carlin.

The hotline’s return — a mostly symbolic gesture by both sides — comes as North Korea is showcasing milestones in its weapons program and trying to avoid fresh U.N. sanctions. Kim’s regime has vowed to expand its military to counter what it calls hostile policies from the United States, its “biggest enemy.”

At the same time, experts say, North Korea may be looking to improve relations with Seoul in the final stretch of President Moon Jae-in’s term, which will end after the March presidential election.

The North may hope that Moon, who has proved to be a willing facilitator of U.S.-North Korea talks, will push the United States toward sanctions relief, said Yoon Young-kwan, a former South Korean foreign minister.

That would give the North a possible face-saving path back to the negotiating table as Washington and allies seek to rein in Pyongyang’s nuclear program.

The Biden administration has said it is willing to resume talks with North Korean officials without preconditions but has not signaled an intention to offer the sanction waivers Pyongyang has been demanding.

“From the North Korean side, the message seems to be rather clear. They want the United States to take a more kind of positive position on the issue of economic sanctions,” Yoon said. “In some sense, I think North Koreans are trying to utilize South Korea’s position to push the U.S. side in their direction, in favor of North Korea.”

The hotline went dormant when North Korea took a dramatically hard line toward the South last year as it sought concessions from Seoul over stalled talks with Washington and became angry about South Korean activists sending leaflets over the border.

The sides agreed in late July to restore calls to reestablish cross-border engagement. But Pyongyang soon stopped answering when Seoul conducted joint military drills with the United States, a move that North Korea views as hostile.

Paik Hak-soon, former president of South Korea’s Sejong Institute think tank, said North Korea has become disillusioned with the United States since the 2019 negotiations with the Trump administration fell apart. The North, however, still sees possible openings with the South, he said.

“What Kim Jong Un is trying, and also what Moon Jae-in is trying, is to continue such a process of peace for his own benefit, respectively,” Paik said. “In the process of improving inter-Korean relations, if Biden gets a more positive message from North Korea, he [Biden] can come out and begin negotiations again.”

North Korea had a provocative September after an otherwise quiet year of self-imposed pandemic lockdown. Its latest activities began with a show of force, then quickly turned conciliatory toward the South.

It test-fired multiple new weapons to show it is on track with its top priorities in its weapons development program, including the apparent hypersonic missile, a new “antiaircraft” missile and a new long-range cruise missile. The North slammed the United States over “double standards.”

Meanwhile, Moon delivered a speech on Sept. 21 at the U.N. General Assembly again calling for an end-of-war declaration, which he views as a way to move forward with denuclearization talks. Sustained fighting in the Korean War ended with an armistice agreement in 1953, but the two Koreas remain technically at war.

Kim Yo Jong, the North Korean leader’s sister, responded favorably and called the declaration “an interesting and an admirable idea” but said that it was not the right time.

With just a few months left in Moon’s five-year term, critics of the South Korean president say he is rushing to coax Kim back to negotiations without making serious efforts toward denuclearization.

“Declaring peace at the same time while acknowledging their nukes - how does that mean anything to us?” said Lee Jun-seok, the chairman of South Korea’s opposition People Power Party. “It’s like putting your feet on both pedals while driving the car. Pressing two pedals at the same time, it will break your car eventually.”

U.S. State Department spokesman Ned Price told journalists Monday that the United States supports the restoration of inter-Korean dialogue and reiterated that it is “prepared” to meet with North Korean officials “without preconditions.”

Yoon, South Korea’s former foreign minister, called for a rethinking of how the United States has approached North Korean issues for decades.

“The level of mutual distrust is so high, and that has been the fundamental reason for no progress or even worsening situation up to now,” Yoon said. “If we really want to resolve this nuclear issue without changing the nature of the U.S.-North Korean political relations, I think it would be impossible.”

Jessica Lee, senior fellow at the Washington-based Quincy Institute think tank, which promotes a more restrained approach to foreign policy, said there is only so much progress that inter-Korean talks can accomplish unless Pyongyang and Washington are willing to open direct negotiations.

“Washington clearly believes it is acting reasonably, while Pyongyang sees provocation as the best way to get Washington to be more reasonable,” Lee said. “Diplomacy is about compromise and getting some, not all, of what you want. Until Washington and Pyongyang accept that reality, inter-Korean diplomacy will never progress beyond aspiration.”