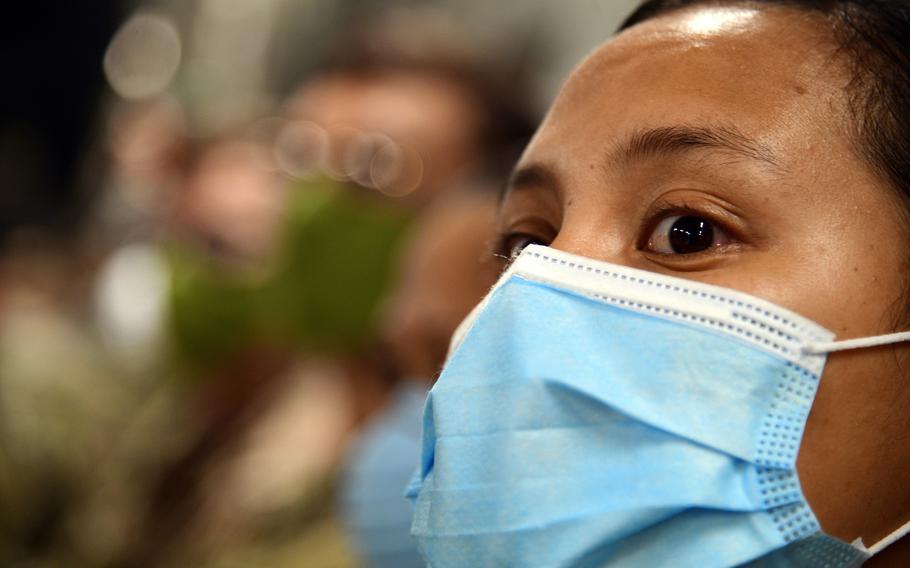 Military installations on Guam reimposed their mask policies after a spike in new cases of the coronavirus, just a week after the civilian government relaxed many of its pandemic restrictions.

All personnel on Defense Department installations, which include Naval Base Guam and Andersen Air Force Base, must wear masks indoors or outdoors when someone from another household is present, according to a statement Wednesday by Joint Region Marianas.

Masks are not required during physical training, the joint region said.

The policy applies to anyone on a DOD installation, regardless of vaccination status, according to the statement, which attributed the about-face to “an increase in COVID-19 positive cases among military members,” along with an increase in operational tempo and an influx of temporarily assigned personnel.

About 4,000 troops, including soldiers from the U.S. 82nd Airborne Division, 1st Special Forces Group and the Japan Ground Self-Defense Force, took part in the monthlong Forager 21 exercise on Guam that started in late July.

Service members and Defense personnel on temporary duty are restricted to their installations except for official duties, according to the order, unless they are fully vaccinated or have recovered from COVID-19 in the past three months and are free of symptoms.

Then new cases began to spike. Guam’s Joint Information Center reported 40 newly infected people between July 23 and 30. Between Saturday and Friday, it reported another 132 new cases.

A spokeswoman for Guerrero said the spike was expected as the island opens up and restrictions are lifted.

“Many of these cases have been attributed to the spread among military members, which prompted the reinstatement of the mask mandate on military bases earlier this week,” Krystal Paco-San Agustin wrote in an email Friday to Stars and Stripes.

“This was to be expected,” she said. “The situation hasn't worsened, evidenced by the minimal number of COVID-19 admissions in our hospitals.”

Only three of the 21 cases reported Friday could be attributed to contact tracing, according to center data released Friday.

Paco-San Agustin did not reply to an email asking for the number of military related cases as of Friday. Joint Region Marianas spokeswoman Lt. Cmdr. Katie Koenig could not be reached by phone or email Friday.

The vaccination rate for active-duty service members on the island rests just below the local population at 76.3%, Koenig wrote in an email Tuesday to Stars and Stripes.

“One of the greatest challenges now is maintaining the positive momentum and avoiding complacency,” she said. “While we are making positive progress, the COVID-19 pandemic is still affecting our communities and we must remain vigilant, encourage all service members to make the decision to get vaccinated and maintain our mission readiness to preserve a free and open Indo-Pacific region.”

Joint Region Marianas will continue to “vigorously” assess COVID-19 policies to ensure the military is protecting their own and members of the local community, Koenig said.

Guam has seen 8,673 positive cases of COVID-19, the coronavirus respiratory disease, during the pandemic, and 143 deaths, the Joint Information Center reported Friday.