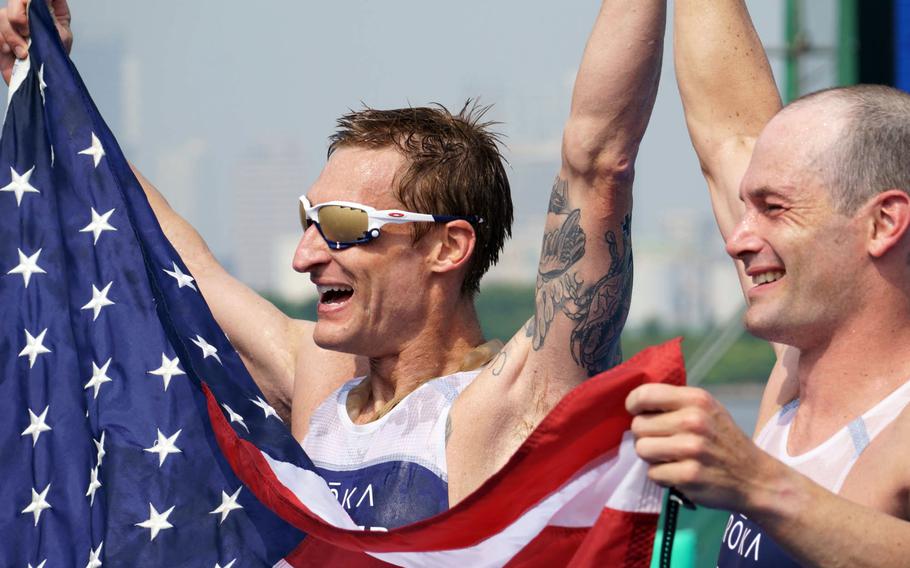 Buy Photo
Navy veteran Bradley Snyder, left, who lost his sight during an Afghanistan blast in 2011, and Greg Billington ceberate after winning a gold medal in the Paralympic triathlon at Odaiba Marine Park, Tokyo, Saturday, Aug. 28, 2021. (Akifumi Ishikawa/Stars and Stripes)

On Thursday, the Tokyo 2020 organizers tweeted, “Originally a rehabilitation activity for injured war veterans, #WheelchairBasketball is now one of the most popular sports in the #Paralympics.”

The tweet was a reminder of the deep connection between the Paralympics and veterans — who often receive a disproportionate share of the publicity. The extra attention makes sense given that the U.S. military has long used sporting events as venues for drumming up headlines. But the Paralympics also highlight Americans’ practice of elevating veterans above the nation’s other people with disabilities.

The Paralympic movement began as the Stoke Mandeville Games in 1948. Ludwig Guttmann, a German Jewish neurologist who had fled to England in 1939, had been using sports, especially archery, as part of the rehabilitation program for spinal cord injuries at the hospital where he worked in Stoke Mandeville, England. The initial event consisted of an archery competition between injured men from two veterans hospitals. Guttmann claimed he purposefully picked the day that the London Olympics kicked off to stage his competition because he wanted to show that sport was not only for non-disabled individuals.

Dutch veterans joined the competition in 1952, and by the end of the decade, approximately 20 countries sent teams.

The World Veterans Federation helped the 1960 event to take place in Rome shortly after the Olympic Games concluded in the Italian city. With 21 countries and more than 300 athletes, the 1960 event became the first Paralympic Games. The Paralympics expanded in 1976 with the introduction of a winter edition and, for the first time, the inclusion of competitors with impairments beyond spinal cord injuries. 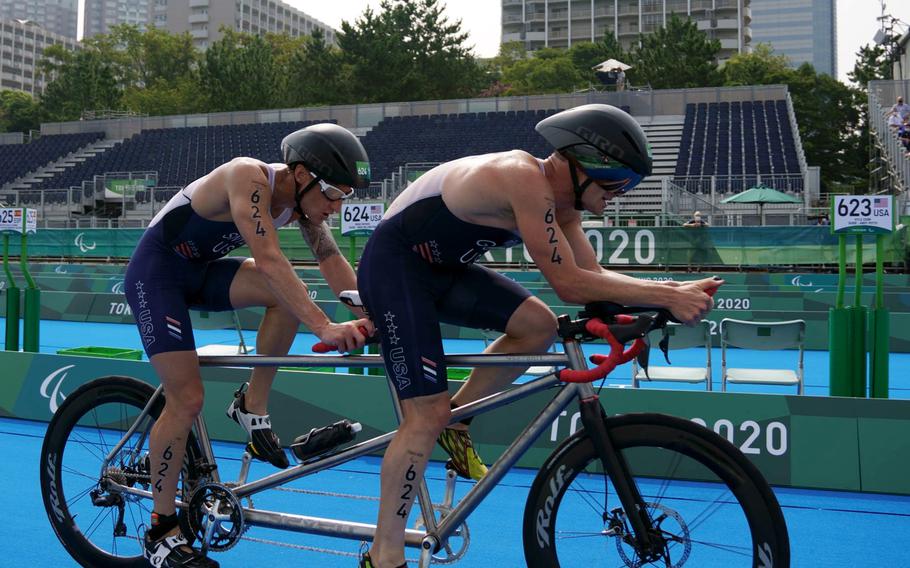 Buy Photo
Team USA’s Bradley Snyder, left, and Greg Billington ride a tandem bike on their way to Paralympic triathlon gold at Odaiba Marine Park in Tokyo, Saturday, Aug. 28, 2021. Snyder is a Navy veteran who lost his sight from a blast in Afghanistan in 2011. (Akifumi Ishikawa/Stars and Stripes) 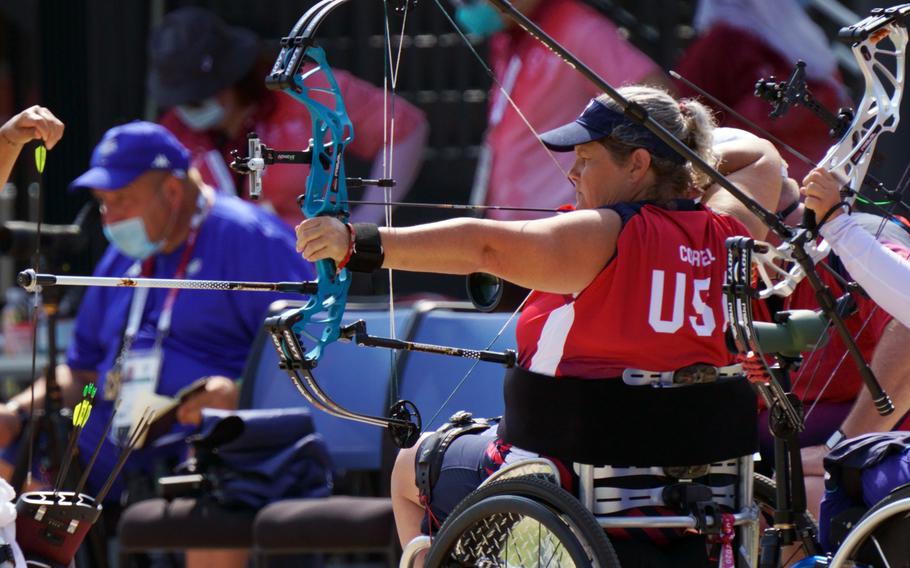 In the 1980s, the International Olympic Committee offered disabled sports official patronage and financial support, and the Olympic Games and Paralympic Games began to always take place in the same city, with the 1988 Summer Olympics in Seoul and 1992 Winter Games in Albertville, France.

But in the United States, an especially close connection has developed between the Paralympics and the military. Certainly, active-duty and retired military members have long competed in the Olympic Games. But as the U.S. military became interested in using sports in the treatment of physical and mental injuries, more attention was focused on developing sporting events for disabled veterans. For example, paralyzed World War II veterans played wheelchair basketball as part of their rehabilitation programs. One game, staged at Madison Square Garden in 1948, attracted 15,000 spectators.

Over the next four decades, new wars in Korea, Vietnam and the Persian Gulf led to increased pressure to rehabilitate the nation’s disabled vets.

In 2004, the U.S. military’s relationship with adaptive sports reached a new level of intimacy when the U.S. Olympic Committee established the Paralympic Military Program (PMP). It was largely a response to concerns about the growing numbers of severely wounded troops returning from Afghanistan and Iraq.

With disability rates of returning veterans on the rise, the program hosts camps around the country to introduce parasports to service members and eligible veterans. It also works with the Department of Defense and the Department of Veterans Affairs to highlight the government’s desire to rehabilitate the nation’s war wounded.

But the program — and the military’s engagement with adaptive sports in the years since it launched — is also a product of a military-civilian culture shaped less by the conduct of the nation’s wars and more by the increasingly small percentage of U.S. citizens willing to enlist in the armed services.

After 9/11, Americans were encouraged to embrace a “Thank You For Your Service” mentality that elevates military service members into the highest ranks of citizenship — a compensation for the lack of collective sacrifice involved with fighting the war on terrorism. While other disabled people struggle to gain any kind of public recognition or financial support, the Department of Defense and other government entities are quick to tout the military’s sporting prowess as a sign of the country’s support for its disabled veterans.

Not surprisingly, some competitors grumble that America’s soldier-athletes have an unfair advantage when it comes to qualifying for the Games and reaching the medal stand. This consternation is the byproduct of the United States’ lack of government funding for Olympic and Paralympic athletes, something provided in other countries. This practice leaves American athletes resorting to funding sites such as Kickstarter or GoFundMe to help pay for equipment and transportation to attend the international events that allow them to qualify for the Olympic Games.

But things may be changing. Almost 25 percent of Team USA (18 athletes) who competed at the 2018 Games in PyeongChang were military members, which Team USA promoted extensively.

In Tokyo, by contrast, only 21 of the 240 U.S. athletes slated to compete have a self-identified military connection. Three are active-duty members of the armed services: Sgt. 1st Class Elizabeth Marks (swimming), Staff Sgt. John Joss (shooting) and Staff Sgt. Kevin Nguyen (shooting). Despite their small number, these three — and Marks in particular, who won a silver medal on the first day of the Paralympics — have received outsize media attention, thanks in large part to the relentless hyping of the Defense Department’s media efforts.

George Orwell famously wrote: “Sports is war without the shooting.” If the United States hopes to lead the Paralympic medal count in Tokyo as it did in the Olympics, it will be civilians — not only military personnel — leading the nation to victory.

Heather Dichter teaches sport management in the Leicester Castle Business School and is a member of the International Center for Sports History and Culture at De Montfort University in Leicester, England. John M. Kinder is director of the American Studies Program at Oklahoma State University, author of “Paying With Their Bodies: American War and the Problem of the Disabled Veteran” and co-editor of “Service Denied: Marginalized Veterans in Modern American History,” which will be published by the University of Massachusetts Press.