‘Get on my back. I’ll carry you:’ Army officers recall their escape from the Pentagon on 9/11 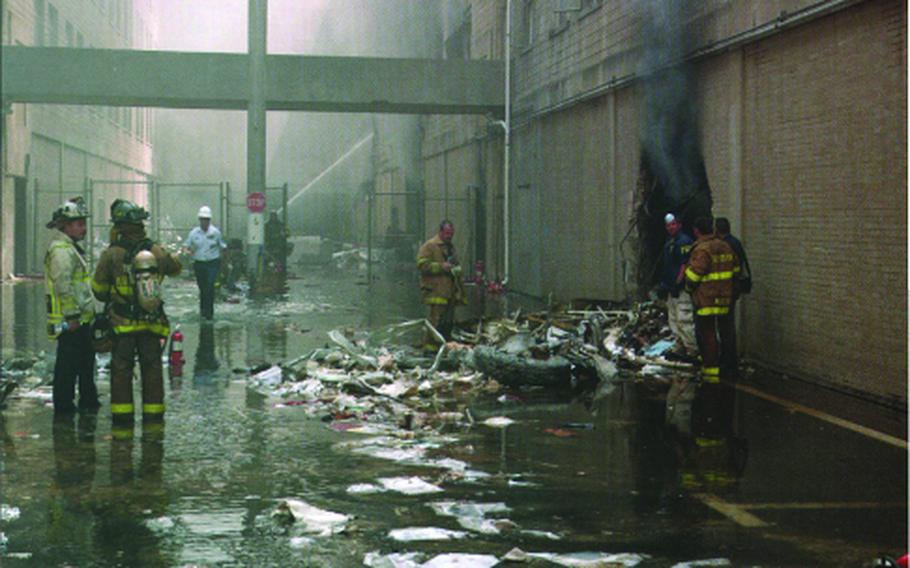 Retired Army Col. Marilyn Wills was working at the Pentagon on Sept. 11, 2001, when a highjacked airplane crashed into the building. She and others escaped by forcing out a second-floor window above the damaged wall shown here.  (Department of Defense)

Lt. Col. Marilyn Wills sat in a 9 a.m. meeting on Sept. 11, 2001, waiting for her turn to speak. The 16 people in the conference room knew nothing about planes crashing into the World Trade Center in New York City that morning.

When American Airlines Flight 77 slammed into the Pentagon at about 9:37 a.m., the blast launched Wills from her chair to the other side of the table. At first, she thought there was some sort of construction accident, she said because that section of the building had recently been renovated.

The room went dark. Wills reached for the doorknob, but it was too hot to grab, so she began crawling to the other exit. Another woman, a civilian, clung to her belt as they formed a small caravan of survivors in search of a safe exit. The woman’s nylon pantyhose had begun to melt to her legs, and she told Wills that she didn’t think she could continue.

“Oh yes, you can. Just get on my back. I’ll carry you,” Wills said she told the woman.

With smoke filling the air, the small group forced a second-floor window out of its frame and began helping each other out, eventually forming a human ladder with those below them. Wills wanted to go back to look for more people, but a colonel told her no. He ordered her to go through the window.

“The only [order] in the Army I did not want to obey,” Wills said. She thought of those she knew were still inside, including Marian Serva, a congressional affairs contact officer for the Army.

Serva died that day, along with 124 other Defense Department personnel. The 59 people aboard Flight 77 also died at the Pentagon. In New York City and Shanksville, Pa., officials grappled with devastation left by the three other hijacked commercial airplanes used in the coordinated terrorist attack. In total, nearly 3,000 Americans died that day.

Wills began her Army career as military police, but was serving on 9/11 as a congressional affairs liaison for the Army’s personnel office, known as the G-1. Now a retired colonel, she joined three other retired Army officers on Wednesday to discuss what it was like to be inside the Pentagon on 9/11 as the 20th anniversary approaches Saturday. 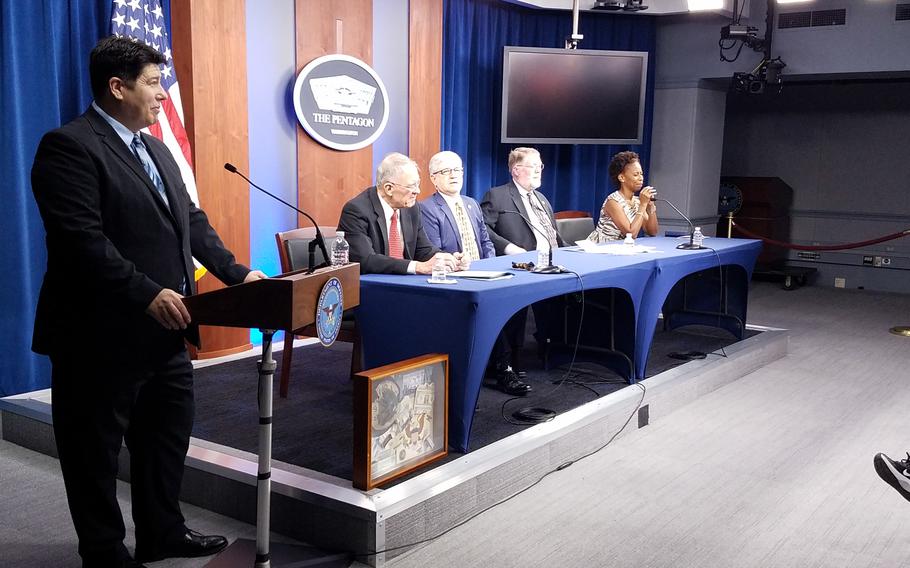 Four retired Army officers spoke Wednesday about their experiences surviving the 9/11 terrorist attack at the Pentagon. Between Defense Department personnel and the passengers aboard American Airlines Flight 77, 184 people died at the Pentagon that day. The youngest was 3 years old, the oldest 71. (Department of Defense)

The 9/11 terrorist attacks sparked a drastic change in American military operations. What had been a relatively calm period for the military “transitioned to war immediately,” said retired Col. Mark Lewis, who works now as the acting assistant secretary of the Army for manpower and reserve affairs. On 9/11, he was the G-1’s director of plans and resources.

Less than a month after 9/11, American military forces invaded Afghanistan, beginning a war that would become the longest in U.S. history. Troops later invaded Iraq, and the two countries quickly became the frontlines of America’s Global War on Terror.

Though troops still deploy to Iraq, the war there ended in 2011. Operations ended in Afghanistan on Aug. 31 after weeks of a chaotic evacuation effort at the airport in Kabul.

“I'm glad that it's over. Now it's ours to remember those that gave that sacrifice. We're not naive enough to believe it's going to be the last time. We just need to be ready, and the generations that come after us have got to be ready,” Lewis said.

Taking the opportunity to discuss 9/11 on the anniversary of the attacks is one way to do that. Those who died on 9/11 were “just the tip of the iceberg” of life lost, he said.

Retired Col. Roy Wallace, who still works at Army G-1 as the assistant deputy chief of staff, said he understood the gravity of 9/11 when he realized that these wars were “a different kind of war.”

“The enemy that we've been fighting for the last 20 years disappears in a puff of smoke. It's an ideal. It's not a country,” he said.

Retired Col. Gerry Kitzhaber, who works now as with the assistant secretary of the Army for manpower and reserve affairs, said it wasn’t until he’d evacuated the building on 9/11 that he had some idea about what had happened. Standing in a center courtyard at the Pentagon, he noticed some Air Force personnel gathered around something on the ground — a piece of airplane about the size of a turkey platter, he said.

Once outside the Pentagon, Kitzhaber spoke to a delivery man who had seen the plane fly into the building.

“The next thing he said kind of took us by surprise. He said he could see the people in the windows of the airplane, as it came in. We just didn't know how to process that,” he said.

While sharing his story, Lewis became emotional when he spoke of remembering Maude, who he described as the “quintessential general” — smart, focused and caring.

Lewis should have been inside Maude’s office on 9/11 when the plane struck the Pentagon. He went to see him for a scheduled meeting at 9:15 a.m., but was told to come back. The general was busy and behind schedule, Lewis was told by Deborah Ramsaur, Maude’s secretary, who also died that day.

Wallace, who had also been in Maude’s office that morning, said he continues to share his story about the experience on 9/11 so that people remember “freedom isn’t free.” Two years ago, he spoke to seniors at the U.S. Military Academy at West Point, N.Y., where the only future officers who were alive on 9/11 were still in diapers.

“If you aren't a student of history, there's a wise man who said, ‘you're doomed to repeat it,’” he said of his message to cadets and other groups to which he speaks. “I think the real message is the resilience that came out of it, and not the actual [acts of terrorism].”

The four retired officers said they all eventually went back to the Pentagon to work. Wills recalled the smell of fumes, burning bodies and electrical wires that lingered long after the attacks.

“I'd walk down the hallways, and I would think that I saw a ghost because I knew I saw Marian. I knew I saw Gen. Maude. I knew I saw these people,” she said. “It was difficult, when I would go sit in the new general's office, and they had opened up a flight path to fly back over the Pentagon again. As I'm sitting in a meeting, I'm watching these planes go by.”

Her new boss understood, she said. And with time and work, Wills said her fear lessened, “because I knew I had to continue to serve.”