While omicron explodes around the world, COVID cases in Japan keep plummeting and no one knows exactly why 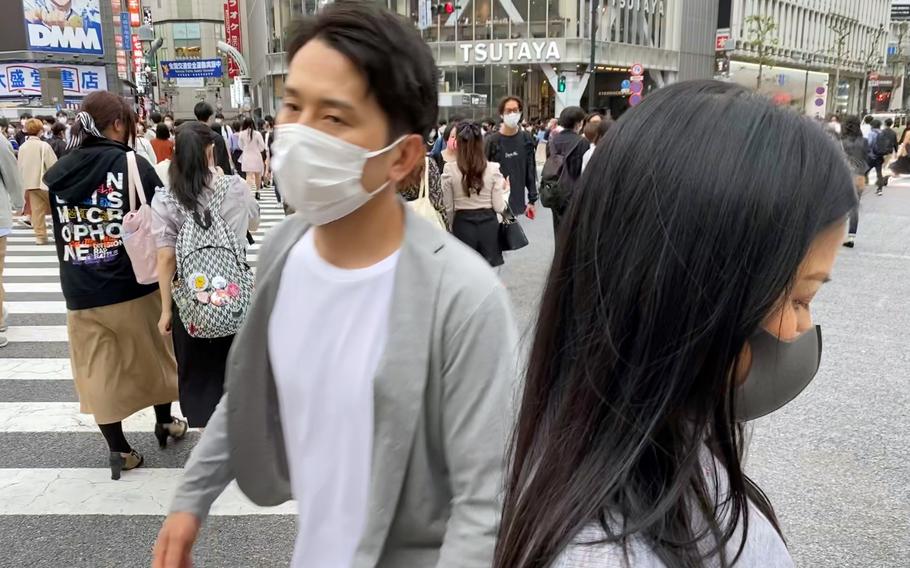 TOKYO — As the omicron variant surges around the world, Japan’s overall coronavirus cases and deaths have been plummeting. And no one seems to know exactly why.

Call it the hunt for a potential “X factor,” such as genetics, that may explain the trend and inform how Japan could deal with the next wave. While the new highly transmissible omicron variant has appeared in the country and experts suspect there is already some community spread, the overall transmission rate of the virus and coronavirus-related deaths in Japan have remained low.

“Honestly, we do not know the exact reason behind the sudden drop in covid deaths in Japan,” said Taro Yamamoto, professor of global health at Nagasaki University’s Institute of Tropical Medicine.

Throughout the coronavirus pandemic, Japan has had much lower rates of infection and death than in many Western countries, though there was a severe spike over the summer that overwhelmed hospitals.

Milder outbreaks — compared with the ravages of the virus in Europe and the Americas — were found in many Asian countries and were attributed often to a public accustomed to health measures from previous experiences with respiratory illnesses like the SARS and MERS epidemics. Researchers had also looked into genetics, diet and other factors that may have spared East Asian countries like Japan and South Korea from the high death tolls elsewhere.

In Japan, researchers have also examined factors like weather, cyclical patterns in the spread of the virus, and potential past exposure to mild coronavirus variants that may have led to the low case and death counts. Experts have identified potential genetic characteristics among the Japanese that may have led to a stronger immune system response to the coronavirus, but said there needs to be more research to draw definitive conclusions.

Japan has now vaccinated most of its population and has widespread masking, which may explain the current low numbers. But so does neighboring South Korea, where authorities are rescinding reopening plans because of a spike in infections and record numbers of serious and critical cases. And Japan has barely begun rolling out its booster shots, lagging behind other countries in the region, including South Korea.

“Obviously vaccination, masking and social distancing are surely factors, but those alone cannot explain it, especially when comparing the situation to South Korea,” Yamamoto said. “It is unclear yet whether there is a factor X that exists specific to Japanese or East Asian people, but in determining this we hope it can help us to understand and control the virus.”

In the past month, the official daily case count in Japan has ranged from about 60 to under 200 in a country of 127 million. There have been fewer than five coronavirus-related deaths recorded most days since early November.

Those numbers come with a caveat, and probably are an undercount of the pandemic’s true toll because of the lack of widespread testing, systemic contact tracing or vaccine passports, and delays in reporting of deaths from municipalities.

The lack of testing and the prevalence of asymptomatic cases means the government probably recorded one-fourth to one-tenth of the true number of cases until recently, when more testing options became available, according to Michinori Kohara, a researcher at the Tokyo Metropolitan Institute of Medical Science who led a study published last month on underreported and asymptomatic positive cases.

But even taking into account the underreporting, the number of cases and fatalities are a small fraction of the United States and many European countries.

Because of those limitations in detecting the true number of cases in the country, experts are paying attention to pressures on hospitals to gauge how the health-care system is faring, and whether there is a significant number of unreported coronavirus cases.

So far, they say, the situation has vastly improved since the spike in the summer, when hospitals were so overwhelmed that the government asked patients to treat themselves at home because there weren’t enough beds to accommodate them. Seriously ill infections are now under control, experts say.

Japanese Prime Minister Fumio Kishida said Friday that the government aims to provide free and accessible testing starting at the end of this month. He has also called for a study of the government’s failures in responding to the spike this summer, including the cases where people died at home because the hospitals were full.

“There are some deaths and cases that may have been undercounted, but these numbers are not substantial enough to change the overall death rate or percentage,” Yamamoto said.

Japan has kept tight control on its frontiers, especially as the omicron variant emerged, though there is some doubt about the effectiveness of border control measures in preventing the spread of the virus. On Thursday, Japan recorded its first case of the omicron variant in someone who had not traveled. Japanese officials are watching the omicron variant closely, and there have been at least 159 confirmed cases of it. But the overall case count remains low: In the past week, the seven-day average of daily new cases in Tokyo was 25.

Taisuke Nakata, associate professor of economics and public policy at the University of Tokyo Faculty of Economics, led a team that tested six hypotheses to explain why the cases have plunged since the summer spike: 120-day cycle of outbreaks, people avoiding places with high infection risks, vaccinations, weather, herd immunity, or that Japan is seeing a low reproduction rate of the coronavirus.

They found that the final factor, which represents how many people are infected by one positive case, was most probably the only one at play. But they still could not explain why the reproduction rate was low, or how it stayed low even as the government lifted the “state of emergency” status in October and more people were out in society.

The low case counts in Japan are particularly confounding given the situation in South Korea, which had often experienced similar periods of ebbs and flows.

“Many of us [in South Korea] are perplexed by how COVID-19 cases and deaths are approaching zero in the neighboring country,” wrote Lee Duk-hee, professor of preventive medicine at Kyungpook National University in Daegu, in a blog post last month.

South Korea announced last week it would reimpose social distancing controls as the record spike of the coronavirus stymies the country’s reopening plans. The announcement came about 45 days since the government began its “living with covid-19” reopening plan.

Last week, South Korea’s daily caseloads surpassed 7,000 for the fifth time this month, with rising numbers of patients with serious or critical conditions. The health authorities have introduced at-home treatment for virus patients with light symptoms amid a shortage in hospital beds.

Some Japanese researchers have pointed to studies that found genetic or health conditions in Japan, including low prevalence of obesity.

A study published this month by Japan’s Riken research institute, the country’s largest scientific research body, found that a genetic feature found in the white blood cells of up to 60% of Japanese people mounts an immune response to the coronavirus. The immune response was seen in 80% of the people with this genetic feature, and researchers found that it may explain one theory about Japan’s experience with the coronavirus.

This genetic feature, called HLA-A24, is common in East Asian countries and has been found in many countries that have had less severe experiences with the coronavirus, including Japan and Korea. But now, with the diverging experiences of Japan and Korea in the past two months, researchers said they hope to see more work done to find out more about what’s going on.

“Covid cases and deaths were low in Korea until now, but with the surge now and comparison with Japan, it would be interesting to examine what the immunity situation looks like now,” said Shin-ichiro Fujii, team leader at Riken’s immunotherapy laboratory.

The Washington Post’s Min Joo Kim in Seoul contributed to this report.