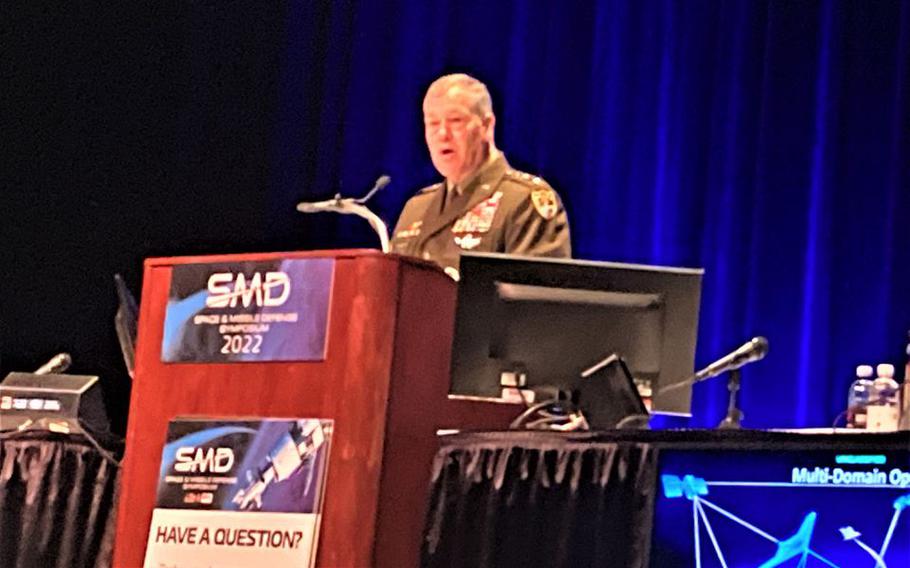 U.S. Space Command leader Gen. James Dickinson told an audience in Huntsville on Aug. 8, 2022, that the final decision on locating the command headquarters at Redstone Arsenal should be coming soon. (Lee Roop, al.com/TNS)

The commanding general of U.S. Space Command gave that neutral answer to a Huntsville space and missile defense symposium Monday when asked about the command’s headquarters moving to the city. Gen. James Dickinson said the move is pending final public comments on an environmental study of the proposed site on Redstone Arsenal. After that, he said, it “goes to the Air Force.”

“What’s happening now is they’re doing a 30-day comment period on the draft environmental assessments, and I think we’re wrapping this up in the next week or two,” Dickinson said.

“When the first announcement came out for Huntsville, that was the preferred alternative in terms of the top six,” Dickinson said. “So, we’ll see what happens when the 30-day period is up.”

The Secretary of the Air Force will make the final decision after the latest comments are reviewed. The issue is to move or not to move the base to Huntsville from its startup location in Colorado Springs, Colo.

Dickinson, who has been based in Huntsville and knows many people on the Arsenal, jokingly pretended not to hear the headquarters question when asked by a moderator. The moderator was asking questions texted from the audience.

The general did mention a current Space Command asset in Colorado in his remarks. Speaking about the young operators “sitting on (watch) console this very second,” he said they are young officers but he trusts them because the command “benefits from organizational competence, backed up by continuing space education and outreach.

“I would be remiss if I didn’t thank the great guardians, sailors, marines and soldiers in the United States Space Command,” Dickinson said of the organization he leads, “and, in particular here in Huntsville today, the U.S. Army Space and Missile Defense Command as well as the Missile Defense Agency and all you do to make sure that we have the right capabilities at the right time with the right people operating. Thank you.”

Dickinson was preceded to the podium by Lt. Gen. Daniel L. Karbler, commander of the U.S. Army Space and Missile Defense Command. That command is based at Redstone, and Karbler toured reporters Monday through the command’s new directed energy research laboratory.