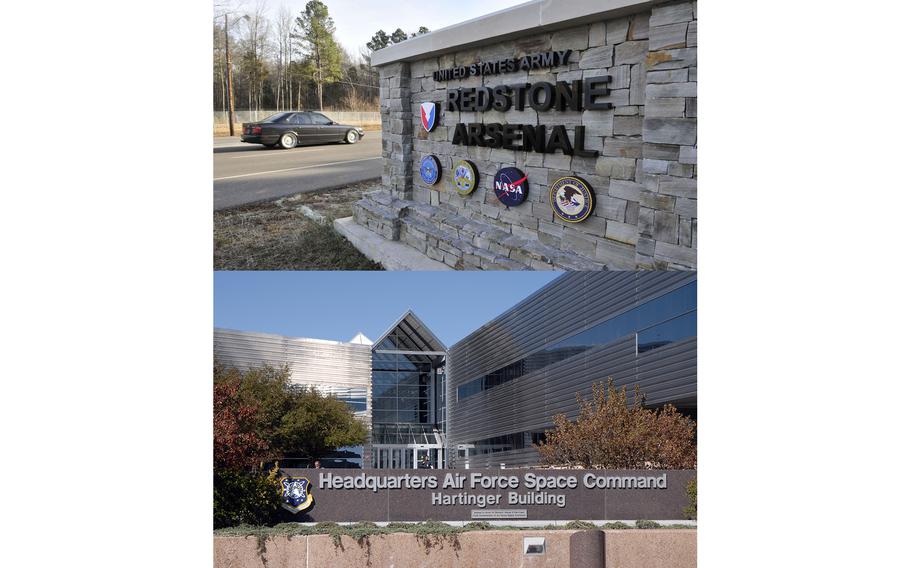 Top, the gate at Redstone Arsenal in Alabama, and bottom, Air Force Space Command at Peterson Air Force Base, Colo. Defense Department officials told former President Donald Trump’s administration that setting up Space Command in Colorado would allow for a quicker path to full operations, but they came away with a decision to move the headquarters to Alabama, according to a new government watchdog report. (AL.com/TNS, Duncan Wood/U.S. Air Force )

Defense Department officials told former President Donald Trump’s administration that setting up Space Command in Colorado would allow for a quicker path to full operations, but they came away with a decision to move the headquarters to Alabama, according to a new government watchdog report.

It remains unclear whether any one person made the final decision.

The 14-month analysis from the Government Accountability Office found the Air Force changed requirements during the decision process, which ultimately affected the scoring system for locations vying for Space Command. For interested parties watching and waiting for the selection, such as members of Congress from Alabama and Colorado, it could have led them to believe the process was biased, the GAO found.

Colorado congressional members initially called for the GAO to review potential bias in the decision, believing the Trump administration put politics ahead of national security and chose Redstone Arsenal in Alabama over Peterson Space Force Base in Colorado.

“With the investigations now complete, the shortcomings of the Space Command basing process are fully available to [President Joe Biden’s] administration. We urge them to review the reports’ findings, and make a decision in consultation with the Joint Chiefs of Staff that prioritizes our national security and mission in space,” according to a statement from Colorado lawmakers — Sens. Michael Bennet and John Hickenlooper, both Democrats, and Reps. Doug Lamborn, a Republican, and Jason Crow, a Democrat.

Space Command, which operated from 1985 to 2002, was reestablished in 2019 just months before Space Force, the newest military service branch, was founded. Space Command is a joint, combatant command that oversees the military’s various space-based infrastructure and operations. Upon its return, the Air Force was tasked with finding a permanent home for its headquarters, which is temporarily operating out of Peterson SFB in Colorado Springs.

The Colorado lawmakers also expressed concern about a White House meeting on Jan. 11, 2021, that ended with Redstone Arsenal as the finalist, though Air Force documents provided to the GAO showed Peterson as the lead choice. The outcome was “justified with inconsistent documentation and unclear reasoning,” the lawmakers said.

On Jan. 8, 2021, prepared documents for the meeting showed Redstone as the lead choice. But then, officials learned Space Force would not need as much space at Peterson as originally thought, and some facilities could be renovated instead of built new. This would allow Space Command to be fully operational sooner than the six years projected for new construction, according to the report.

The day before the White House meeting about Space Command’s location, defense officials moved Peterson to the top of the list because that base would require less construction. They presented their conclusions at the White House meeting, which included former President Donald Trump, former acting Defense Secretary Christopher Miller, former Air Force Secretary Barbara Barrett and other high-ranking military officials.

Two days after the meeting, Redstone was announced as the new home for Space Command. Officials at the meeting said varying opinions were discussed, but overall the conversation was “thoughtful, professional, robust and informed.”

Colorado’s delegation in Washington has fought for any review of the decision, citing concerns Trump leaned on military officials to select Alabama to woo his political allies in the state. The former president later bragged about making the decision on a radio show in August 2021.

“Although the Air Force documented the general rationale for selecting Redstone Arsenal in an action memorandum and accompanying documents, there was not consensus among the officials we interviewed regarding who ultimately made the decision to name Redstone Arsenal as the preferred location for U.S. Space Command headquarters, including the role of the then president in making the decision,” the report stated.

The GAO recommended the Air Force develop guidance for future basing decisions that incorporate best practices from the GAO’s “analysis of alternatives.” GAO used that analysis process to determine the Air Force failed to prevent bias, or the appearance of it, when deciding where to set up the new command’s headquarters.

Edwin Oshiba, acting assistant secretary of the Air Force for energy, installations and environment, agreed to the recommendation.

Oshiba also said the decision of Redstone is not final. It still must undergo an environmental assessment that will include all six finalists for the new headquarters. The other four locations, which the GAO noted were far behind the first two, were Kirtland Air Force Base in New Mexico, Offutt Air Force Base in Nebraska, Patrick Air Force Base in Florida and Joint Base San Antonio in Texas.

The Defense Department inspector general also reviewed the decision, finding that all procedures were followed, but not all criteria used in the process could be verified. The service agreed to revisit the issues of child care, affordability of housing and access to military and veteran support services before finalizing its decision.

Following the inspector general report, which was released in May, officials from Alabama praised the findings. Sen. Tommy Tuberville, R-Ala., said the Colorado lawmakers were suffering from “sore loser syndrome.”

“To date, I and others from Alabama have largely declined to engage in a public back and forth on this issue because doing so would not have been helpful to national security,” he wrote to the Senate Armed Services Committee. “For the sake of national security and military readiness, I will strongly oppose further efforts to unnecessarily delay this critical move.”