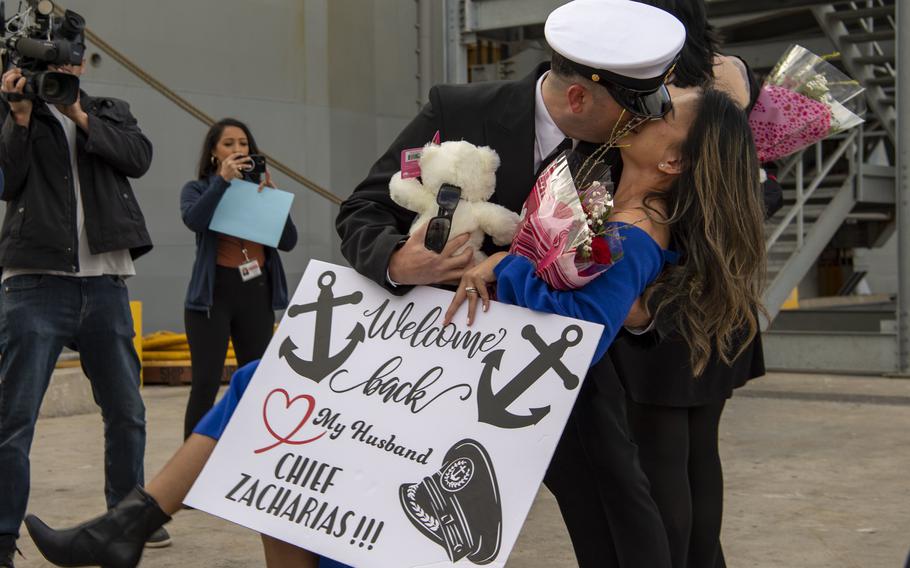 (Tribune News Service) — About 1,200 service members aboard the amphibious assault carrier USS Tripoli are back home after a seven-month deployment to the Indo-Pacific, while another 2,500 service members from the Navy’s 3rd Fleet are on their way to the same region.

On Tuesday, Nov. 29, hundreds of eager family members waited near the dock as the USS Tripoli pulled into its berth at Naval Base San Diego. The ship left San Diego on May 2.

Loved ones participated in a traditional homecoming raffle to see which three sailors would be first to leave the ship and have the coveted “first kiss.” They were Petty Officer 3rd Class Armando Zepeda, Petty Officer 2nd Class Joshua Hannaford and Seaman Ezekial Zacharias.

Next off, in another Navy tradition, were the first-time parents — there were 21. After the newborns and their spouses were greeted, the remaining Marines and sailors, watching high above from the ship’s decks, disembarked to a mass of cheering and crying family members. 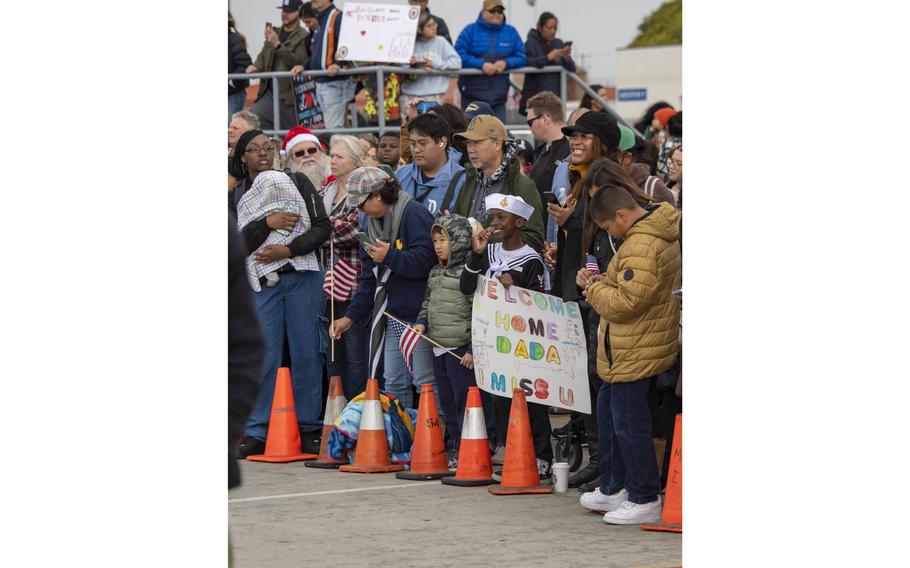 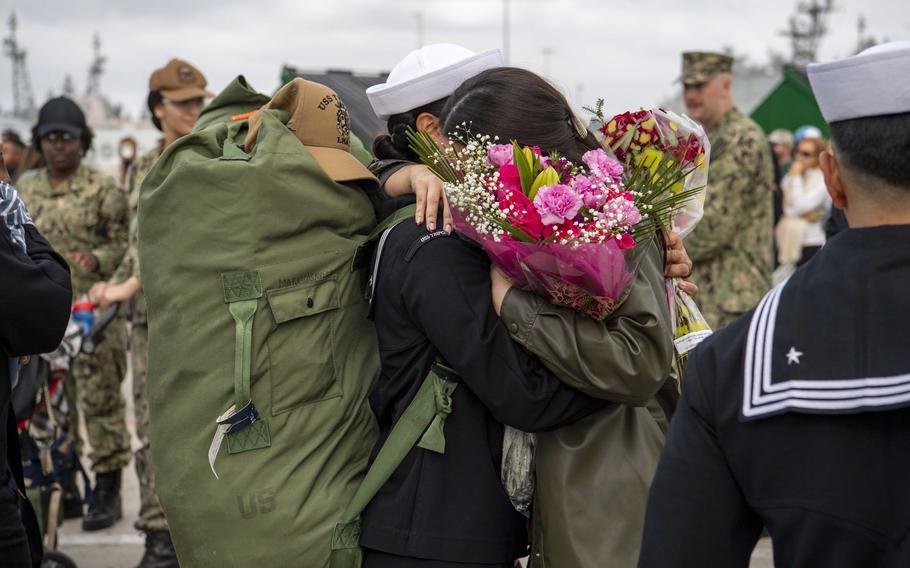 Navy officials said the Tripoli’s deployment was “especially significant” for its role in diplomatic and military engagements with regional partners and allies. The deployment also included successful training with the 31st Marine Expeditionary Unit, which they said was a critical component in a closer integrated Navy and Marines Corps.

“I am proud of Tripoli for a successful first deployment,” Rear Adm. James Kirk, commander of the Expeditionary Strike Group, said Tuesday. “The ship and crew are on the leading edge, setting the example and testing the limits of the assault carrier. I am excited to see what else they can bring to the fight.”

The warship traveled with allied partners through the Indo-Pacific, including militaries from Japan and the Republic of Singapore. Port calls included stops in Tasmania, Australia, Japan, Singapore and the Philippines. 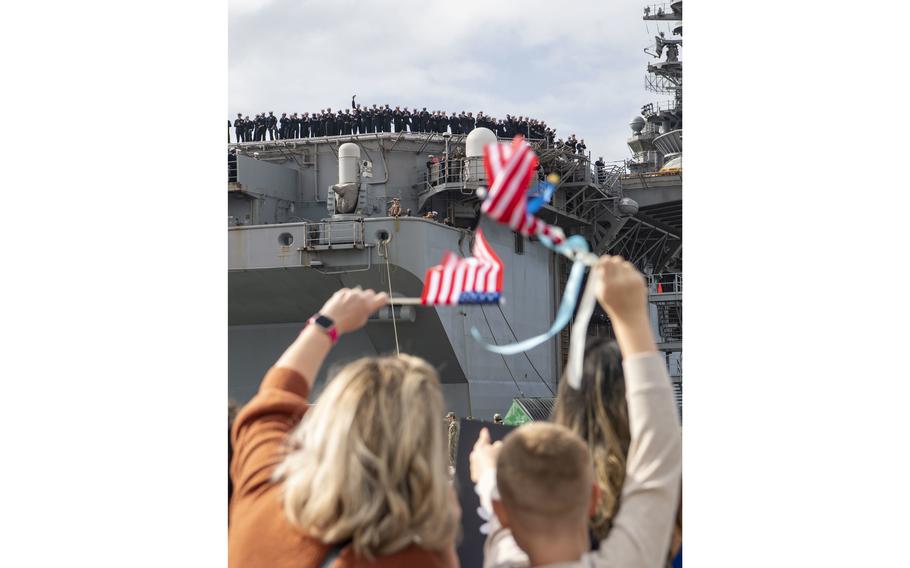 While the USS Tripoli’s sailors and Marines will be home for the holidays, another deployment of Navy warships recently pulled out quietly from Naval Station San Diego and headed to the Indo-Pacific, said Cmdr. Sean Robertson, a spokesperson with 3rd Fleet.

The Makin Island Amphibious Ready Group is out for a similar length of time as the USS Tripoli and has specific training missions, but Navy officials declined to elaborate for security issues.

The ships in the group include the USS Makin Island, a big deck amphibious warship, and the USS Anchorage and USS John P Murtha, and the group will team with the 13th Marine Expeditionary Unit and its more than 2,500 Marines and sailors, which include the Marine Fighter Attack Squadron 122 and Marine Medium Tiltrotor Squadron 362 and ground combat units.

“The mission is to conduct maritime security operations, perform theater security cooperation events, provide crisis response capability and maintain a forward Navy and Marine Corps presence, wherever and whenever called upon to do so,” Robertson said.

The group of ships, including the MEU and the aircraft, departed on Nov. 9 and will be working with the Navy’s 7th Fleet based out of Japan. The fleet is the Navy’s largest forward-deployed fleet and includes 50 to 70 ships, 150 aircraft and 27,000 sailors and Marines. 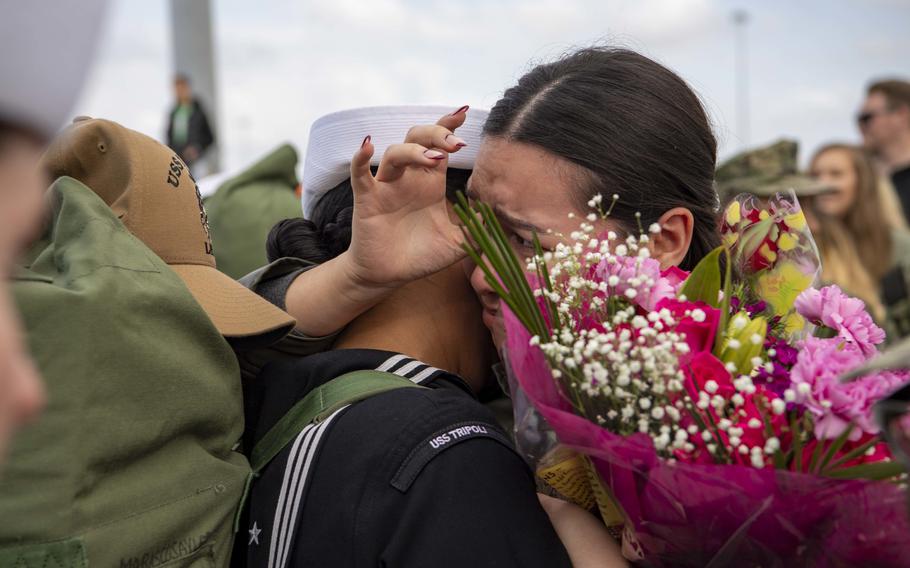 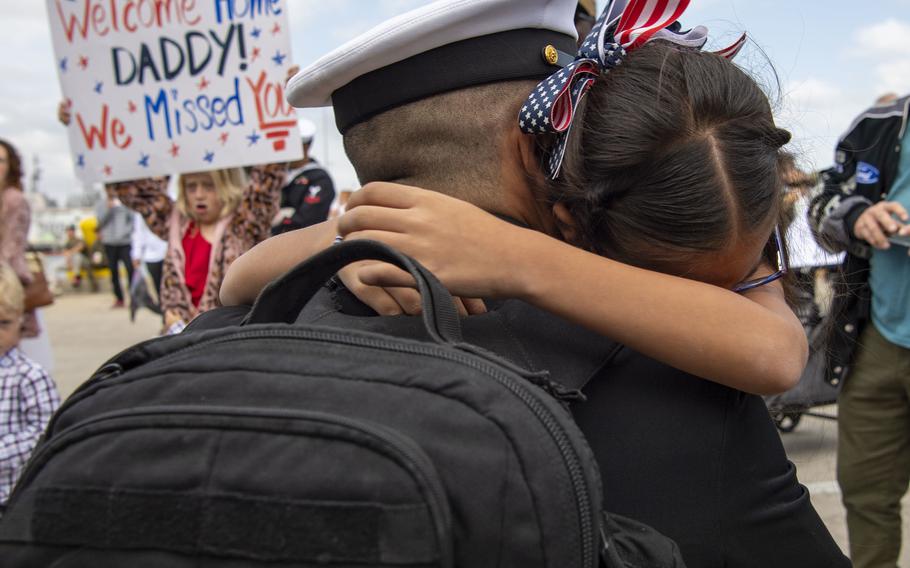