Marines to send F-35Bs to Philippines, fire HIMARS there and in Japan next month 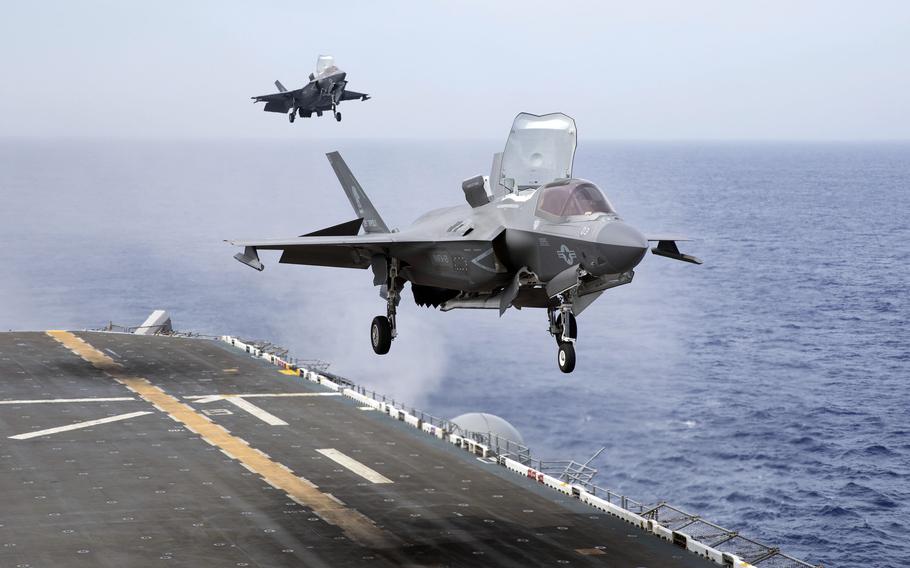 TOKYO – Thousands of U.S. Marines armed with stealth fighters, attack helicopters and long-range missiles will train with Japanese, Filipino and South Korean troops in Japan and the Philippines during the first half of October.

The Okinawa-based 3rd Marine Division will oversee Resolute Dragon 22 on Japan’s northern island of Hokkaido Oct. 1-14, and Kamandag 6 in the Philippines Oct. 3-14.

A headquarters on Okinawa will provide simultaneous command and control for both exercises, division spokesman Lt. Col. Kurt Stahl told Stars and Stripes by phone Friday.

“Resolute Dragon and Kamandag are important opportunities to bolster the defensive capabilities of our alliances with Japan and the Philippines through realistic combined training,” the division’s commander, Maj. Gen. Jay Bargeron, said in comments emailed by Stahl on Monday.

Kamandag — short for “Kaagapay Ng Mga Mandirigma Ng Dagat,” or “Cooperation of Warriors of the Sea” — began in 2017 as a replacement for the large-scale PHIBLEX amphibious landing drill. It was initially focused on humanitarian assistance and disaster response.

Next month’s drill involving 1,900 U.S. Marines and 630 Philippine troops, in addition to naval forces, will be “quite a bit more than a humanitarian assistance exercise,” Stahl said.

The Marines will also fly MV-22 Ospreys, CH-53 Sea Stallions, UH-1Y Venoms, AH-1Z Vipers and KC-130J Super Hercules during the drills, he said. The F-35B is the short-takeoff, vertical-landing version of the joint strike fighter, designed for air support of Marines on the ground.

The Green Knights’ F-35Bs deployed aboard the USS Wasp amphibious assault ship during the annual Balikatan exercise in the Philippines in April 2019.

The Marines are unable to provide the number of F-35Bs involved in this year’s Kamandag, Stahl said.

The Green Knights deployed 14 jets aboard the Tripoli during a Pacific patrol this summer and sent more of the planes to Australia for the biennial Pitch Black exercise involving over 100 aircraft from 17 nations in August and September.

On both missions, they practiced advanced basing operations that involved flying out of austere airstrips.

Kamandag will involve Marines practicing coastal defense on the island of Palawan, which borders the South China Sea, Stahl said.

Beijing has aggressively expanded its territory in the sea by occupying small islets, reclaiming land and building military facilities.

Marines will conduct amphibious raids on smaller islands and there will be live-fire training with the High Mobility Artillery Rocket System, or HIMARS, in central Luzon, Stahl said.

The Japan Ground Self-Defense Force will send 30 soldiers and South Korea will send 100 marines to Kamandag, he said.

Marines will airlift a HIMARS to an airfield on the island and there will be a bilateral live-fire event featuring the weapon, along with Javelin and AT-4 missiles and Japanese multiple launch rocket systems, Stahl said.

The Marines and Japanese troops will do force-on-force training with personnel from both countries participating on both sides of the battle, he said.

South Korea’s debut at Kamandag is part of a series of overseas exercises the country has participated in alongside the U.S., Kim Hyun-wook, an American studies professor at Korea National Diplomatic Academy in Seoul, said in an email Friday.

The U.S. has failed to make the so-called Quad grouping, which includes Japan, Australia and India, into an Asian version of the North Atlantic Treaty Organization but has continued to train with many Indo-Pacific states, he said.

The U.S. is trying to improve coordination with and among its allies, according to Ian Chong, an associate professor of political science at the National University of Singapore.

“The exercises suggest that Korea, Japan, and the Philippines are more ready to begin looking at moving in this direction together with the U.S. and each other,” he said in an email Tuesday. “Including on broader regional coordination given the involvement of a [headquarters] in Okinawa.”