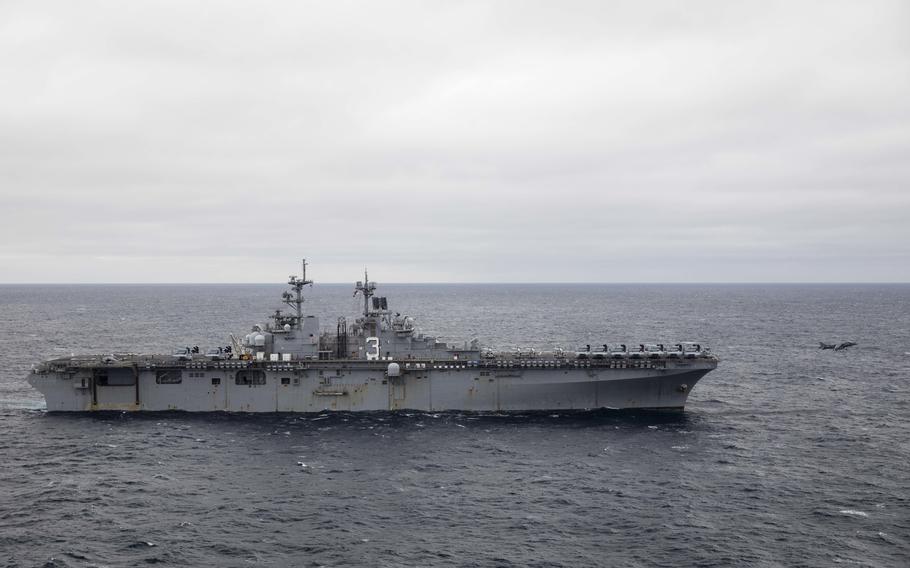 (Tribune News Service) — The Navy’s new long-term shipbuilding plan seems to raise as many questions for Congress as it answers — including when or if it will reach the longstanding goal of a 355-ship fleet and what it wants to do about the amphibious ships that carry Marines to hostile shores.

The new 30-year shipbuilding plan breaks tradition by setting out three scenarios. Two assume no funding increase above the rate of inflation; each expects a fleet of 300 ships by 2035, growing to either 316 or 327 by 2052 — the big difference would be the pace of attack submarine construction after 2030, although they also suggest different totals for destroyers and amphibious ships. The third alternative calls for 300 ships in 2033 and 367 by 2052 — the only plan that eventually gets to the official 355-ship goal.

“Is it really a plan if you present three plans?” said Rep. Elaine Luria, D-Virginia Beach, a 20-year Navy veteran who is vice chair of the House Armed Services Committee.

“It’s like choose your own adventure ... There’s one plan that emphasizes surface ships, one that’s about submarines and one that’s just a throwaway because we don’t think we’ll get the money. Do you know when the last time we had more than 300 ships? It was in 2002.”

The Chinese Navy already is at 355 ships — not counting patrol boats and boats that carry anti-ship cruise missiles — and on track to grow to 420 ships by 2025 and 460 by 2030. Luria and Rep. Rob Wittman, R-Westmoreland, agree the vagueness and slow pace of the U.S. Navy’s plan is dangerous.

“I think it could be a provocation. China would say, ‘Yeah, you’re right, this is our window,’ ” said Wittman, a senior Republican on the Armed Services committee’s seapower subcommittee.

The three alternatives also leave open the question of which of the different mixes of ships does the Navy think the nation really needs, a Congressional Research Service review noted.

One of the biggest issues involves ships such as the Hampton Roads-based USS Kearsarge, USS Arlington and USS Gunston Hall, currently deployed in European waters. The Navy is looking to decommission Gunston Hall and several others of its type.

The Marine Corps says the lack of funds for more LPDs is the top item on its list of unfunded priorities.

“Without those LPDs and other amphibious L-class ships ... we cannot be there and we’re struggling now,” he said.

As an example, Heckl said when NATO’s Supreme Allied Commander Europe asked the 22 Marine Expeditionary Unit, now embarked with the Kearsarge group ships, to deploy early as Russia prepared to launch its invasion of Ukraine, “we were not able to sortie the ships.”

The fiscal 2023 budget says the third of an updated version of the Arlington, a type designated a LPD, will be the last to be built, a major cut from an original plan to build 13 of these.

“There’s a multi-ship L-class proposal sitting on a desk waiting to be executed. I think the signal is that it is not going to be,” Wittman said, referring to the letter that designates amphibious ships.

“But if you do a multi-ship buy you can save $1 billion.”

The plans also postpones for two years purchase of a new class of Light Amphibious Warships until fiscal year 2025. These are key to the Marine Corps’ new “expeditionary advanced base operations” concept — focusing on small, mobile units that move quickly and are hard for adversaries to detect.

When the Navy comes before the Senate Armed Services committee next week, Kaine said he expects to hear one of three answers to where the amphibious fleet stands: the first, that the Navy will build 31, the second that the Navy would like to but budget constraints mean it can’t and the third, that it no longer thinks it needs 31.

“I think the answer will be somewhere between one and two,” he said.

Wittman said he’s concerned that the plan seems to give up on the idea of boosting the pace of Virginia-class submarine construction to three a year from two. Newport News Shipbuilding builds these in partnership with the General Dynamics Electric Boat yard in Connecticut.

“The undersea domain is where we have superiority but we need to go to three a year,” Wittman said. “I’ve talked to the industry, we can get there ... if not right away, we at least can go to a 2-3-2-3 pattern.”

Luria said the plan to decommission cruisers will mean losing a net of 1,000 vertical launch system cells for guided missiles, while the long-term plan calls for no replacement of aging cruise missile submarines.

But the Navy plan doesn’t step up the pace for deliveries of the destroyers that are supposed to fill the air defense role that cruisers play in carrier strike groups, she said.

Rep. Mike Gallagher, R- Wis., said cutting the number of missile launch systems — the effect of mothballing cruisers — would come “at the worst possible moment in the late 2020s.”

Wittman, meanwhile, said he’s worried the plan is looking to maintain just nine carrier air wings. That, he said, calls into question the Navy’s long-term commitment to have 11 carriers in the fleet.

“This plan would actually do the exact opposite of what we should be doing. It would reduce our ability to protect our aircraft carrier strike groups, reduce our ability to eliminate an enemy’s mine field, and it would reduce the Marine Corps. ability to carry out forcible entry missions while reducing our fleet’s missile launching capabilities,” said Rep, Jerry Carl, R- Ala., who like Luria, Wittman and Gallagher is a member of the House seapower subcommittee — the first gatekeeper for Navy funding in the House.

“Shipbuilding is not something that happens overnight. It takes years to build a single ship, and we can’t afford to wait until we are in desperate need to start increasing production,” Carl said.

Sen. Roger Wicker, R- Miss., said the plan is “a blueprint for American weakness” and leaves the Navy even farther away from its 355-ship goal.

“Congress must step in and do the job ourselves,” he said. “We cannot afford to surrender naval superiority to our adversaries.”

Luria said she and allies on both sides of the aisle are gearing up for another funding battle.

“We went through this last year,” she said. “We had to add $24 billion for shipbuilding ... we can’t keep kicking the can down the road.”