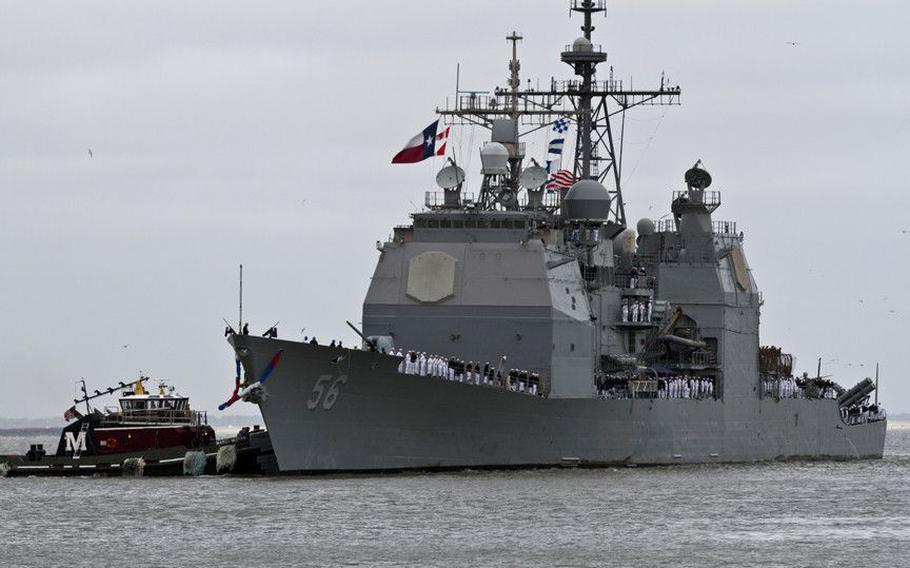 (Tribune News Service) — The 24 ships the Biden Administration’s budget proposal would decommission include four based in Hampton Roads, two of which are currently deployed, according to Navy budget documents posted on Friday.

The budget proposal calls for decommissioning the cruiser USS San Jacinto, currently operating with the USS Harry S. Truman carrier strike group in the Mediterranean, and USS Vicksburg, which has been undergoing repairs at BAE Systems Norfolk yard. They would be taken out of service in fiscal year 2023. The remaining 17 cruisers in the fleet would be decommissioned by 2027.

The proposal also would decommission the just-deployed dock landing ship USS Gunston Hall as well as its sister ship USS Tortuga, which has recently completed an overhaul at BAE.

The four warships were commissioned between 30 and 32 years ago.

The Navy says decommissioning the ships will save the expense of costly maintenance and repair work, freeing up funds for the new ships it wants to build.

Congress this year balked at an earlier Navy proposal to decommission cruisers, and trimmed the number to be idled this year. House Armed Services Committee members Elaine Luria, D-Norfolk, and Rob Wittman, R-Westmoreland, have criticized what they call the Navy’s “divest to invest” plans to decommission ships; both have said the Navy is idling more ships than it is building.