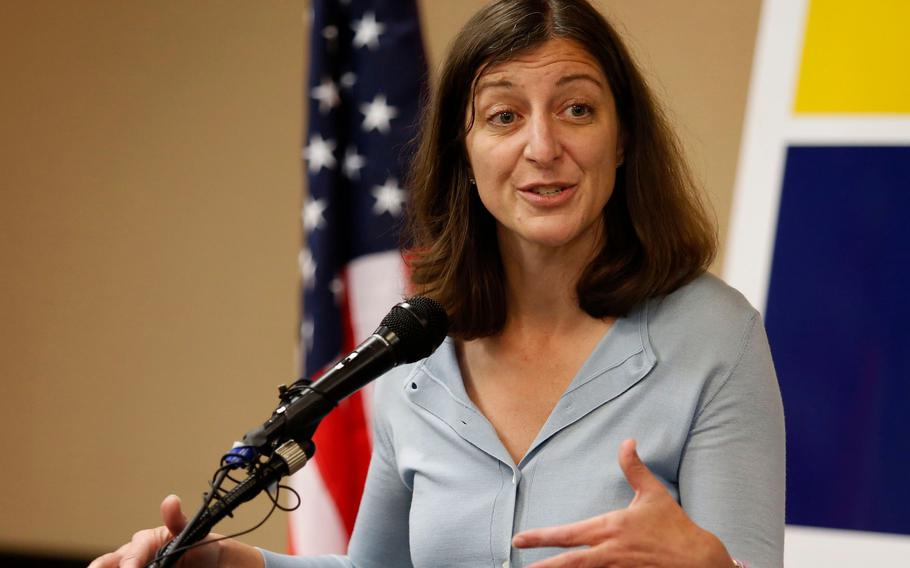 (Tribune News Service) — It took some deep breaths for one former sailor in Congress to set aside some blue words and politely say what she thought of President Biden’s proposed Navy budget.

“In the face of current threats, we are gutting the Navy now to say we’re going to rebuild it in 10 or 20 years,” she said.

As vice chair of the House Armed Services Committee and a key player pulling together a bipartisan agreement last year to overrule an administration proposal to mothball seven cruisers, Luria’s reaction signaled an unfriendly Congressional reception for the fiscal 2023 spending plan.

The administration budget proposal calls for decommissioning 24 ships, a move the Navy says will save $3.6 billion. On the mothball list are the remaining nine Freedom-class littoral combat ships, the oldest of which has been in service for just a decade, as well as five cruisers, four landing ship docks — a type like the recently-deployed Little Creek based USS Gunston Hall — as well as two Los Angeles-class submarines and four support vessels.

Most of those ships are still well within their promised service life.

“The Navy owes the American public an apology,” Luria said. “For two decades, they’ve been building failed classes of ships ... they like the highest tech, biggest and newest thing.”

The Freedom-class ships, which have had major problems with their complicated drive trains, are just one example, she said.

Decommissioning so many ships, with a call to fund only nine new vessels — including one, Luria said, that’s already been authorized — will put the fleet even farther from the goal of a 355-ship Navy, she said.

Luria said the two Virginia-class submarines and two new destroyers the administration proposal calls for aren’t enough. She said the Navy needs to be building three of both a year.

She said the Navy also has its eye on the wrong kind of ships in the future — emphasizing the new and shiny instead of the flexible and easy to build.

That’s the call to postpone funding the new Light Amphibious Warship from 2023 to 2025, followed by a pause for several years before the next in the class comes on. That kind of stop and go work is a major problem, both for new ship construction and ship repaid, she has repeatedly said.

And the ship fits exactly with the latest Marine Corps and Navy amphibious strategy emphasis on small, dispersed unit operations, she said.

Luria said she’s already hearing from Republican members of the House committee who share her concerns, and said she expects the committee will be even tougher on the fiscal 2023 proposal than it was with the just enacted 2022 spending plan.

“I am particularly disappointed that even as we aim to grow our naval and projection forces, this budget continues the divest to invest strategy that will shrink our fleet once again,” he said.

While the president can propose a budget, it is up to Congress to appropriate the money. The agreement the House and Senate just reached for fiscal 2022 boosted spending by nearly $22.4 billion over Biden’s proposed budget, including $4 billion more for shipbuilding than the Biden Administration requested.