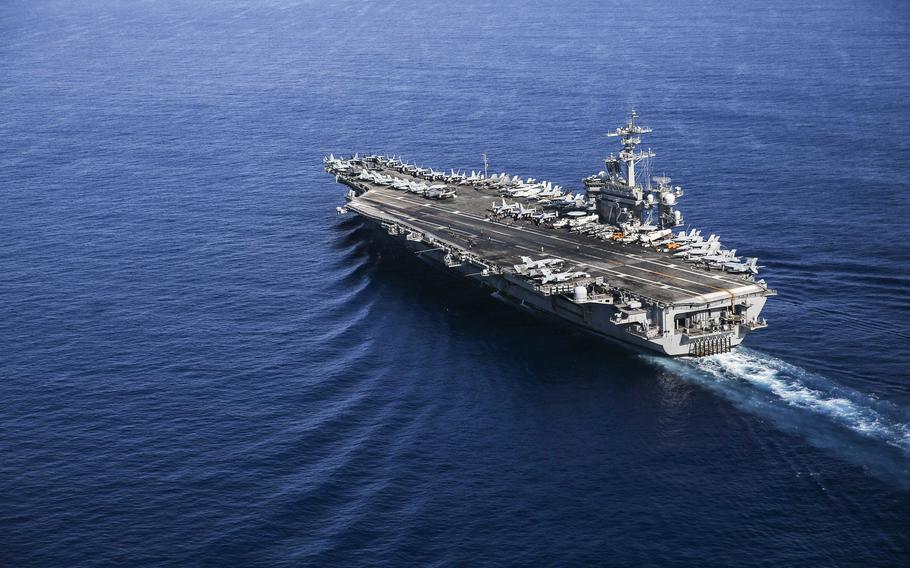 CAMP HUMPHREYS, South Korea — The USS Abraham Lincoln and its strike group are operating with Japanese forces near the Korean Peninsula amid speculation that North Korea will conduct another weapons test.

The carrier group was conducting “routine bilateral operations” with Japan’s Maritime Self-Defense Force in the East Sea, also known as the Sea of Japan, according to an email from the 7th Fleet to Stars and Stripes on Tuesday.

“Our training enhances the credibility of conventional deterrence by demonstrating the strength of our bilateral partnerships,” wrote 7th Fleet spokesman Lt. Mark Langford. Operations like this “reassure our allies and partners of the U.S. commitment to maintaining a free and open Indo-Pacific,” he said.

A South Korean official told Stars and Stripes on Tuesday that the military has been “maintaining close cooperation in the deployment of strategic U.S. assets” and directed questions to the U.S. Defense Department.

The operation marks the first time since 2017 that a U.S. carrier group has deployed to the East Sea. At the time, the USS Ronald Reagan, USS Theodore Roosevelt and USS Nimitz sailed together with their naval counterparts from South Korean and Japan for an exercise off the peninsula’s coast.

North Korea’s Foreign Ministry threatened to retaliate against the exercises in 2017, which it characterized as a preemptive move for a full-scale invasion.

The latest operation comes amid speculation that North Korea may soon conduct a nuclear test. Its most recent and largest underground nuclear test happened on Sept. 3, 2017, in what it claimed was a hydrogen bomb.

Sung Kim, the U.S. special representative for North Korea Policy, told reporters on April 6 that the communist regime could test a nuclear weapon on April 15, which is the late North Korean leader Kim Il Sung’s birthdate.

Other evidence has prompted nuclear watchdogs to theorize that a nuclear test may be looming.

In March, analysts from the James Martin Center for Nonproliferation Studies at the Middlebury Institute of International Studies reported seeing “very early signs of activity” at the Punggye-ri site where North Korea conducted its past underground nuclear tests.

Based on satellite photos, the analysts found evidence of a new building under construction, as well as repairs on other structures. The test site was supposedly demolished in 2018 after North Korean leader Kim Jong Un, South Korean President Moon Jae-in and President Donald Trump signaled they would establish closer ties and lower tensions.

Those efforts now appear to be shelved as the North conducted at least 11 rounds of missile tests so far this year, including the March 24 launch of an intercontinental ballistic missile theoretically capable of reaching the U.S. mainland.