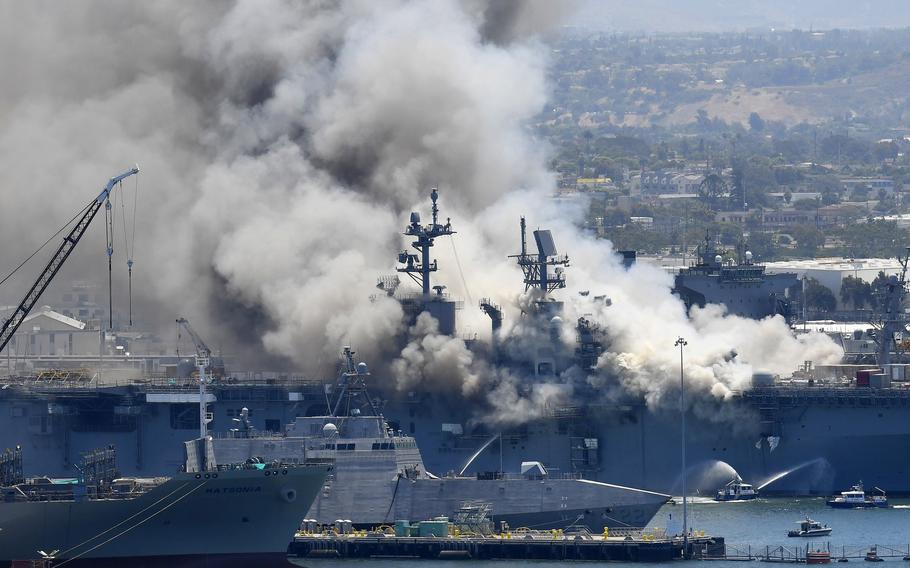 In this July 12, 2020, file photo, smoke rises from the USS Bonhomme Richard at Naval Base San Diego after an explosion and fire on board the ship at the base. (Denis Poroy/AP)

WASHINGTON — Members of the House Armed Services Committee on Thursday questioned the culture and readiness of the Navy’s surface fleet after a government watchdog report showed crew shortages, overworked sailors and other issues continue to abound years after several costly disasters.

In a hearing with Navy officials, House lawmakers said they were disheartened to read about the same problems that surfaced during investigations of the 2017 crashes of the USS John S. McCain and USS Fitzgerald and the 2020 fire aboard USS Bonhomme Richard. The collisions killed 17 sailors while the fire injured 63 sailors and civilians.

“I worry that the Navy's progress in implementing findings from these accident investigations might mostly be on paper, and that in practice, they're not translated into lasting change,” said Rep. John Garamendi, D-Calif. “I’m worried that the surface Navy is not thinking deeply enough about how to change the culture, to evaluate morale and to empower officers and sailors to voice concerns when they see problems.”

In 2017, junior officers boarding a ship received 150 hours of a training in simulators and now they receive 750 hours, Kitchener said. Every sailor is also now required to enroll in an engineering course.

The Navy is increasingly turning to artificial intelligence technology and data collection to cut down on maintenance delays and reduce the amount of time sailors spend performing maintenance during 67-hour work weeks, Lescher said. For the past year, commanders have tracked every individual’s proficiency and experience level to fill experience gaps on ships, Kitchener said.

“There is no lack of understanding of the power of data,” Lescher said.

Technology is also being harnessed to tackle chronic fatigue. Most sailors sleep five or less hours per night, according to the GAO report. Kitchener said the Navy set a goal last year to bring that number to 7.5 hours and is using wearable sleep trackers to document progress.

Data shows sailors are now sleeping about 6 hours per night so “clearly there’s a lot more work to be done,” Kitchener said.

There is also room for improvement with maintenance, he said. The Navy struggled with continuous maintenance of ships in the past due to requirements that ships be operational but has now established a better balance. However, some problems persist at the naval base in Sasebo, Japan, due to capacity issues, Kitchener said.

“In general, we are not deferring maintenance,” he said. “If we do defer any kind of maintenance, that decision is done at the highest level.”

Rep. Jack Bergman, R-Mich., and Rep. Elaine Luria, D-Va., urged the Navy officials to adopt a simpler system for soliciting feedback from sailors and communicate clearly with the public without acronyms or buzzwords.

“You have done so much, but we’re not there. We are not there, and we need to be there and we need to stop with the acronyms and create a feedback loop that gives it back to you immediately,” Bergman said. “Don’t try to BS this group because we’re here to help you.”

Luria added: “Reading your statement, hearing you speak, you seem to be choosing your words very carefully, but they don’t really sound like normal people in the Navy speak. They don’t sound like words the normal public would listen to.”

Lescher and Kitchener did not respond to the criticism.

Rep. Mike Waltz, R-Fla., said he was disturbed to see the disconnect between the initiatives cited by the Navy’s leaders and the comments of sailors who were interviewed for the government's report.

“Despite your actions — and I want to give credit for many of those actions — we’re still receiving these troubling reports,” he said. “I do understand some of these issues are going take time but here we are almost five years from the McCain and Fitzgerald incidents. That was a wake-up call then. And I think we're getting a wakeup call in Europe right now that this type of high-end conflict isn't a thing of the past.”