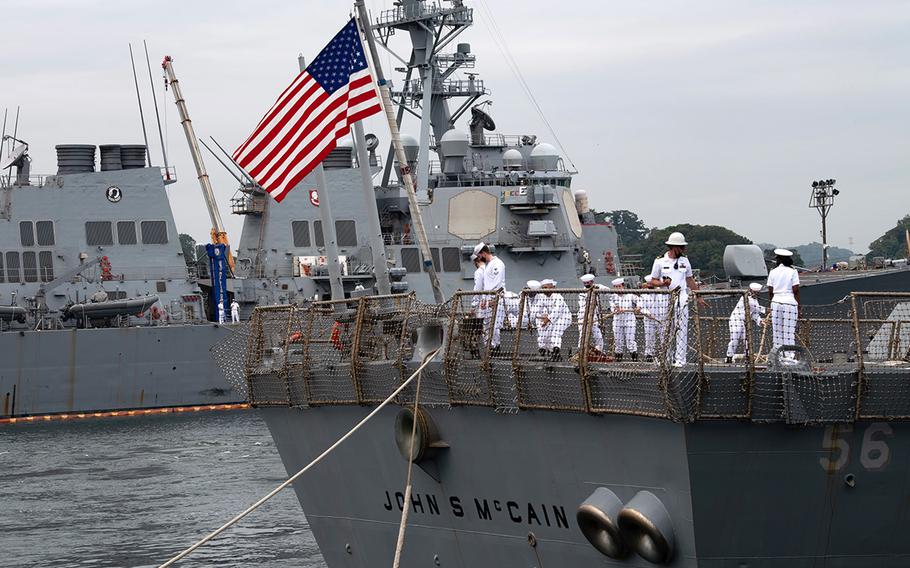 YOKOSUKA NAVAL BASE, Japan – The USS John S. McCain sailed out of Tokyo Bay on Friday, leaving Japan after 24 years with 7th Fleet and the heartbreaking loss of 10 crew members from a collision in 2017.

The Navy announced the guided missile destroyer’s departure on Friday. It is named for three generations of naval officers bearing the same name, including the late Sen. John McCain, an Arizona Republican who ran for president in 2008.

The McCain is headed for Naval Station Everett, Wash., its new homeport, according to the Navy. While stationed at Yokosuka, the destroyer and its crew landed in the heart of unsought controversy.

The ship collided with a Liberian-flagged tanker, the Alnic MC, in the Strait of Malacca near Singapore, on Aug. 12, 2017. The collision killed 10 sailors and heavily damaged the destroyer.

The incident was one of two collisions by 7th Fleet destroyers that summer. On June 17, 2017, seven sailors died aboard the USS Fitzgerald when it collided with a Philippine-flagged container ship, ACX Crystal, about 80 miles southwest of Tokyo. 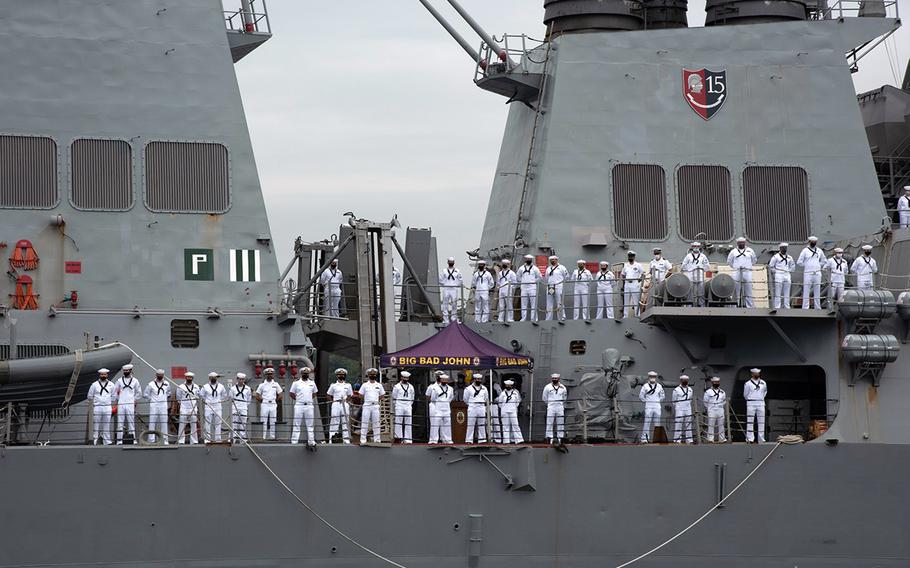 The McCain was sidelined for repairs until June 2020. The destroyer bears a memorial plaque engraved with the names of the 10 sailors who lost their lives on the ship.

"John S. McCain and her Sailors have proven time and time again our Navy's resolve to answer the call in support of our nation and our allies," the ship’s skipper, Cmdr. Tin Tran, said in a Navy news release. "After 24 years of faithful overseas service, we are ready to head back home to America, back to Washington State. Our sailors will forever remember the bonds of friendship and hospitality Japan has shown us."

The McCain will join 3rd Fleet, which operates in the Eastern Pacific.

The McCain’s replacement is the USS Raphael Peralta, which is en route to Japan in February, according to 7th Fleet spokesman Lt. Mark Langford.

"It is definitely a changing of the guard with USS John S. McCain and her crew departing the 7th Fleet after over 24 years in Japan," the commander of Destroyer Squadron 15, Capt. Chase Sargeant, said in the release. "The contributions of the current and all previous crews in defending peace and stability in the Indo-Pacific cannot be overstated.”

The McCain arrived at Yokosuka in summer 1997, and over the years took part in numerous operations and exercises.

In 2011, the ship took part in Operation Tomodachi, which provided humanitarian assistance following the Tohoku earthquake and tsunami.

The ship made headlines again in May 2019, when multiple media outlets reported that the White House had asked the Navy to keep the destroyer “out of sight” during then-President Donald Trump’s visit to Yokosuka.

Trump did not deny the report, which first appeared in the Wall Street Journal.

“I would never do a thing like that,” he told reporters at the time. “Now, someone did it because they thought I didn’t like him. OK? And, they were well meaning, I will say … they thought they were doing me a favor because they know I’m not a fan of John McCain.”

On Feb. 4, the McCain steamed past the Paracel Islands in the South China Sea, islands built up by China with military installations, in a demonstration of freedom of navigation, according to the Navy. The next day, the destroyer transited the Taiwan Strait, another routine Navy exercise that challenges China’s claims in the region. In April, the McCain made another pass through the strait.

The McCain’s homeport shift follows the departures of other Arleigh Burke-class destroyers in recent years. The USS McCampbell and USS Stethem left Yokosuka in 2019 and 2020, respectively. In August, the USS Curtis Wilbur left.

The destroyers USS Higgins, USS Stethem and USS Dewey arrived in August and September to replace them.