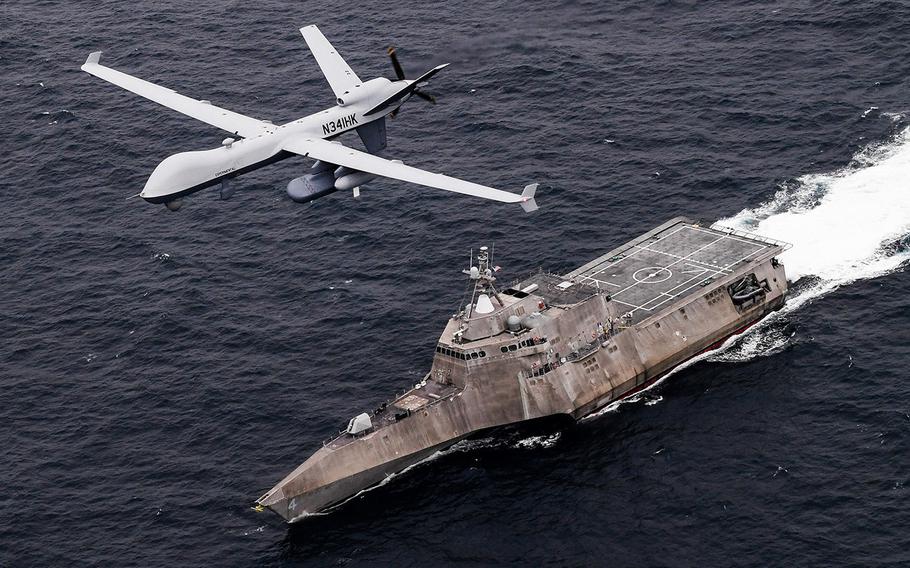 WASHINGTON — The Navy will launch its first task force dedicated to unmanned systems and artificial intelligence in the Middle East on Thursday as the U.S. military continues to shift its counterterrorism forces within the region, the service announced.

Naval Forces Central Command will oversee Task Force 59, which will concentrate unmanned and AI capabilities from across the Navy and roll them out for sailors to use in a real-world, complex setting, said Vice Adm. Brad Cooper, the commander of NAVCENT and 5th Fleet.

“We need to get unmanned systems out into the fleet into the hands of operators, so this is exactly what we're doing here at NAVCENT with Task Force 59,” he said Wednesday.

Cooper declined to say whether the new task force would be involved with counterterrorism missions, though he said NAVCENT has “been very involved with Afghanistan from a [noncombatant evacuation] standpoint.”

The establishment of the Navy task force in the Middle East comes as the U.S. boosts its reliance on unmanned capabilities in the region after withdrawing all American forces from Afghanistan last week and ending 20 years of military involvement in that country.

U.S. Central Command has said it will continue to conduct “over-the-horizon” counterterrorism strikes in Afghanistan if needed. That included two drone strikes on Islamic State fighters in Kabul in the final days of U.S. evacuation efforts from the city.

The Task Force will employ some technologies that have not yet been used in daily operations. The idea is to evaluate the systems in a real-world setting, which “is exactly what will help us accelerate the technology development and integration across the fleet," Cooper said.

“This effort is really to get the unmanned systems in the hands of the operators so they can put it against real problems and determine whether it helps solve those problems and if it doesn't, perhaps we should look for [other options,]” he said.

Task Force 59 will integrate the Navy’s arsenal of aerial, surface and undersea drones and AI systems “as a means to do two things: enhance our maritime domain awareness and to increase our deterrence,” Cooper said.

Among those unmanned and AI technologies are those used in the Pacific Fleet’s Unmanned Battle Problem 21, a weeklong exercise in April that tested manned and unmanned capabilities in invented scenarios, Cooper said.

The initiative comes as the Pentagon pushes to further integrate AI and unmanned capabilities into the forces as it focuses on confronting near-peer adversaries such as China. In its 2022 budget, the Defense Department requested $112 billion for development, testing and evaluation — its largest-ever request for the category that includes AI and autonomous systems development.

“Beijing already talks about using AI for a range of missions, from surveillance to cyberattacks to autonomous weapons,” Defense Secretary Lloyd Austin told the National Security Commission on Artificial Intelligence in July. “China’s leaders have made clear they intend to be globally dominant in AI by the year 2030.”

Primarily, the drones and AI systems will be used to offer a more complex picture of the surrounding environment, from above and below the surface, Cooper said.

The 5th Fleet region, which spans from the Red Sea to parts of the Indian Ocean, offers benefits to testing the equipment in operational settings as “the waterways are ripe for real-world evaluation” with its 5,000 miles of coastline and “three critical choke points,” including the Strait of Hormuz, the only passage from the Persian Gulf to the open ocean, and the Suez Canal, which connects the Mediterranean Sea to the Red Sea, Cooper said.

“I think that environment really suits us well to experiment and move faster,” he said. “Our belief is if the new systems can work here, they can probably work anywhere else.”