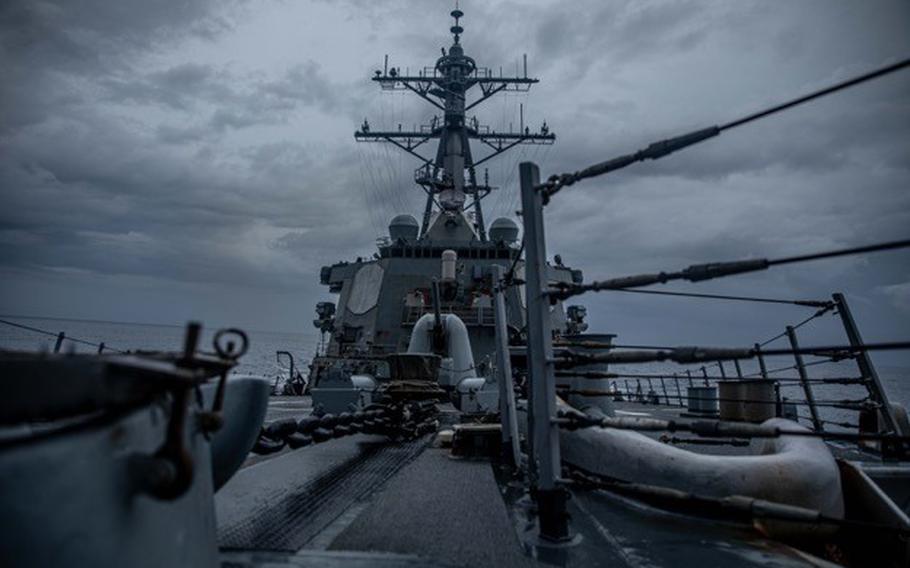 WASHINGTON — As the Navy sailed a guided-missile destroyer through the Taiwan Strait on Tuesday, senators on Capitol Hill hounded the service’s top leaders on whether their proposed 2022 budget will be enough to deter an increasingly aggressive China.

One issue was the Navy 2022 budget proposed canceling the previously planned construction of a second destroyer, meaning only one of the ships used to patrol contentious waterways, protect aircraft carriers and strike down enemy missiles is included in the new budget.

The service would need an additional $1.66 billion on top of its proposed $211.7 billion budget to fund the second destroyer, which it is under contract to have built by Ingalls Shipbuilding and General Dynamics Bath Iron Works.

Canceling construction of one ship would be an overall cost savings, though the Navy would have to pay a $33 million breached-contract penalty for doing so, Adm. Mike Gilday, the chief of naval operations, told the Senate Armed Services Committee at its hearing on Navy force posture.

Acting Navy Secretary Thomas Harker said canceling the second destroyer was a “very hard choice,” but it was necessary to make room for other priorities in the budget.

“Every dollar is a strategic asset that must be maximized to stay ahead of the pacing threat of China,” Harker told the committee.

But Sen. Jim Inhofe of Oklahoma, the ranking Republican on the committee, said the budget “makes bad choices — not hard choices.”

“Adm. Gilday is forced to cut the destroyer, not because he doesn’t need it or doesn’t want it,” Inhofe said. “He wants it — but he’s forced to cut it, didn’t have a choice.”

Instead, Inhofe said he wants to see more ships built — not fewer. Fewer ships sends adversaries the message that “we’re not willing to do what it takes to defend ourselves, our allies and our partners,” he said.

“While China is growing its fleet, our Navy is struggling to avoid shrinking,” Inhofe said.

China has about 350 ships compared with 296 for the United States. Congress in 2018 mandated the Navy work toward a 355-ship fleet as soon as possible, but little progress has been made toward that goal so far.

While senators and Navy leaders debated the issue, the USS Curtis Wilbur — an Arleigh Burke-class destroyer like the one cut in the 2022 proposed budget — steamed through the Taiwan Strait to assert the U.S. commitment to a free and open Indo-Pacific region, Lt. Andrew Bertucci, a 7th Fleet spokesman, said in a statement Tuesday.

U.S. Navy ships passing through the 110-mile-wide Taiwan Strait typically provoke condemnation from China. The strait separates China from Taiwan, which Beijing sees as a breakaway province and the waterway its territory. The U.S. regards the strait as international waters and passages through it aim to reaffirm that view, the service has said.

Recognizing the Chinese threat, Gilday said the Navy’s fleet must grow, but the service had to make budget sacrifices to help modernize its shipyards and develop better nuclear capabilities to fend off Beijing's increasingly capable military.

“America needs a larger, more capable fleet,” Gilday told senators. “However, our Navy faces the task right now of recapitalizing our strategic nuclear deterrent — something we haven't done in 40 years — and we're making a once in a century investment in our public shipyards, long overdue … so the fleet can confidently operate forward and be relevant.”

To do so, the Navy budget proposed $830 million in shipyard investments for the coming fiscal year and more than $1.37 billion in research and development for its conventional prompt strike program, which will develop hypersonic glide rockets for missiles – a capability China has but the U.S. doesn’t.

Still, there remains a chance that Congress could fund the second destroyer in 2022, which the Navy listed among its highest unfunded priorities for the next fiscal year. Last year, Congress funded a submarine that was originally on the Navy’s list of unfunded priorities.

More so, increases to the Navy’s budget will be necessary in coming years as tensions rise with China, Gilday said. This year’s $211.7 billion budget proposal is a 1.8% increase from the 2021 budget, which he said was not enough to kept up with the rate of inflation.

“Our fleet can control the seas in conflict and project power ashore today, but we will be increasingly challenged to do so in the future unless hard choices are made,” Gilday said.

Gen. David Berger, the Marine Corps commandant, offered another warning to senators about keeping the Navy’s budget flat in the face of an advancing Chinese military — it could send a message that the U.S. is not committed to deterring Beijing.