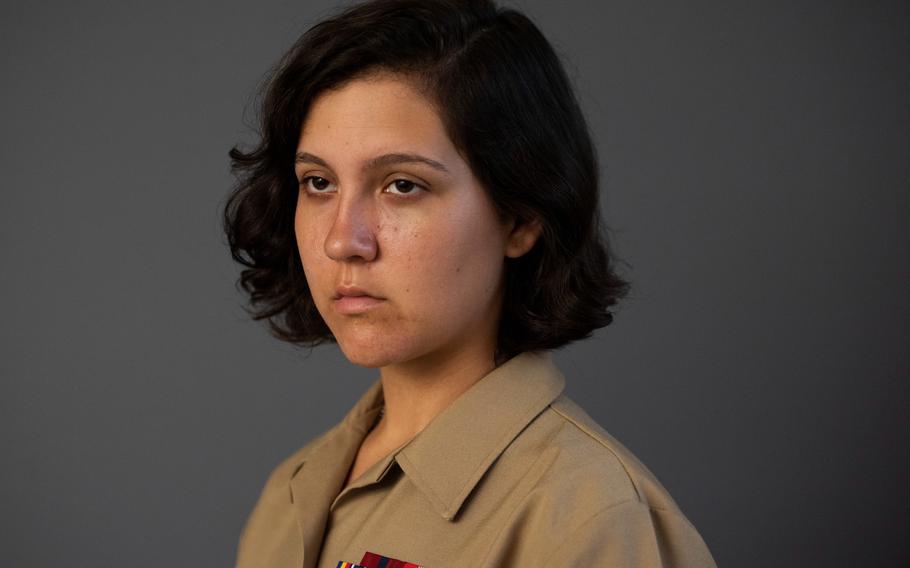 MARINE CORPS AIR STATION IWAKUNI, Japan — The Marine Corps next month plans to “assess the status” of the case against Lance Cpl. Catherine Arnett, who faces court-martial on charges linked to her refusal of a COVID-19 vaccine.

A military judge in Japan, Navy Cmdr. Ben Robertson, on Monday delayed Arnett’s special court-martial after her lawyer cited an Aug. 18 order by a federal judge temporarily barring the Corps from punishing or discharging Marines who refused the vaccine on religious grounds.

“The United States Marine Corps closely considers any procedural or circumstantial changes in legal cases,” Maj. Rob Martins, a spokesman for the 1st Marine Aircraft Wing, said in an email Wednesday to Stars and Stripes.

He said the status hearing is scheduled Sept. 27.

Robertson delayed the start of Arnett’s trial, because although the case against her is separate from her vaccine refusal, it falls within the scope of the federal court injunction, according to Martins’ email.

Arnett, 24, of Fort Worth, Texas, in July said she refused to board those flights because the orders stemmed from the 2021 Defense Department mandate on COVID-19 vaccination, which she considers unlawful. The Marines allege she also refused a pre-travel COVID-19 test.

Her two-day trial was delayed first in early August and again on Monday, a day before its scheduled start. She is charged with two counts under article 87 of the Uniform Code of Military Justice, missing troop movements on May 7 and May 14, and one under article 92, disobeying a direct order on May 7.

Merryday also granted class-action status for all active and reserve Marines who refused the DOD vaccine mandate on religious grounds.

Arnett said she is a practicing Catholic who objects to the role fetal cell lines play in developing and testing the COVID-19 vaccines.

Arnett said she’s been at MCAS Iwakuni since May 2019, first with Marine Air Logistics Squadron 12, then with Marine Aerial Refueler Transport Squadron 152 for 2½ years. She’s back with the logistics squadron, but not in the job she trained for, aviation supply specialist, while she awaits the outcome of her case, she said in late July.

“Right now, I refuse to sit and stay still in one place. Right now, with having my work permissions being revoked, they expect me to twiddle my thumbs,” Arnett told Stars and Stripes on Monday. “But I still get up and, you know, go do stuff and find people to help, which is what I love to do.”

Martins said Arnett “has been and will continue performing her daily duties and tasks” while her case is pending.