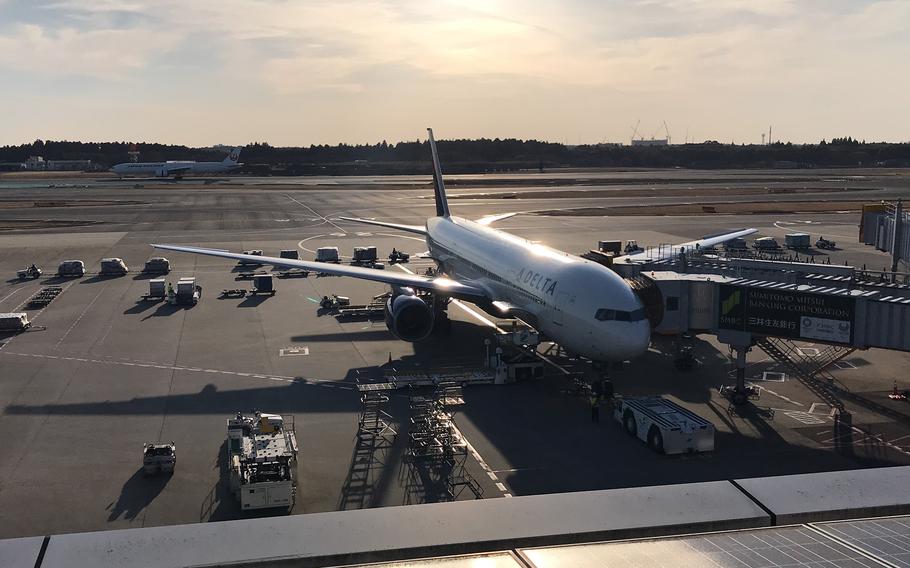 Buy Photo
A commercial plane parks near a gate at Narita International Airport east of Tokyo on March 9, 2019. (Aaron Kidd/Stars and Stripes)

CAMP FOSTER, Okinawa — The Japanese government lodged a complaint with the U.S. military earlier this month after a Marine infected with the coronavirus broke quarantine protocols and traveled from Tokyo to Okinawa on a commercial flight.

“We have requested that U.S. Forces Japan follow the border measures and prevent a recurrence,” Chief Cabinet Secretary Hirokazu Matsuno said at a press conference Tuesday.

The Marine, in his 20s and assigned to Camp Foster, arrived Oct. 30 at Narita International Airport east of Tokyo, a spokesman for Okinawa prefecture’s Department of Public Health and Medical Care told Stars and Stripes by phone Wednesday. He tested positive for COVID-19, the coronavirus respiratory disease, at the airport screening station.

The Marine was supposed to quarantine at Yokota Air Base, the U.S. airlift hub in western Tokyo, but instead traveled to Okinawa on a commercial flight the next day, according to the spokesman. As of Wednesday, no passenger from the flight has come down with the virus.

“He should not have been on public transportation,” the spokesman said on a customary condition of anonymity. “This should not happen again.”

The Marine Corps notified prefectural authorities Nov. 1 that a Marine had traveled to Okinawa the previous day and tested positive upon arrival, the spokesman said. He said the Marine was reportedly vaccinated and asymptomatic.

Japanese officials were surprised because they thought the Marine was in quarantine at Yokota, also the headquarters of USFJ, the spokesman said. He said the Marine incorrectly declared at Narita that he was assigned to Yokota.

“We really don’t know if that was just a mistake or not,” the public health spokesman said. “That is why we requested the Japanese government to find out how it happened.”

Yokota is the designated quarantine site for personnel entering Japan under the status of forces agreement who test positive at Narita, the spokesman said. Staff at Narita “assumed” the Marine would be picked up by someone from Yokota and taken to be isolated.

USFJ contacted the Japanese Foreign Ministry immediately after the incident, a spokesman for the ministry’s SOFA division told Stars and Stripes by phone Wednesday, “and we have been requesting U.S. Forces Japan to prevent this from happening again.”

The prefectural public health department identified 27 passengers that were seated near the Marine, the public health spokesman said.

Prefectural officials followed up with a letter Nov. 10 to the Foreign Ministry, the public health spokesman said. In it, they formally requested an investigation into how the incident occurred and implored Tokyo to isolate COVID-positive patients, including U.S. military personnel, at airport quarantines.

This is the second dust-up between Japan the U.S. military over U.S. travelers under SOFA violating coronavirus restrictions in Japan.

In July 2020, a family of four took a commercial flight from Haneda International Airport in Tokyo to Kintaikyo Airport on their way to Marine Corps Air Station Iwakuni. Tests at Haneda later showed three of the family members were infected with the coronavirus. The family left Japan and was barred from U.S. military installations for 10 years.