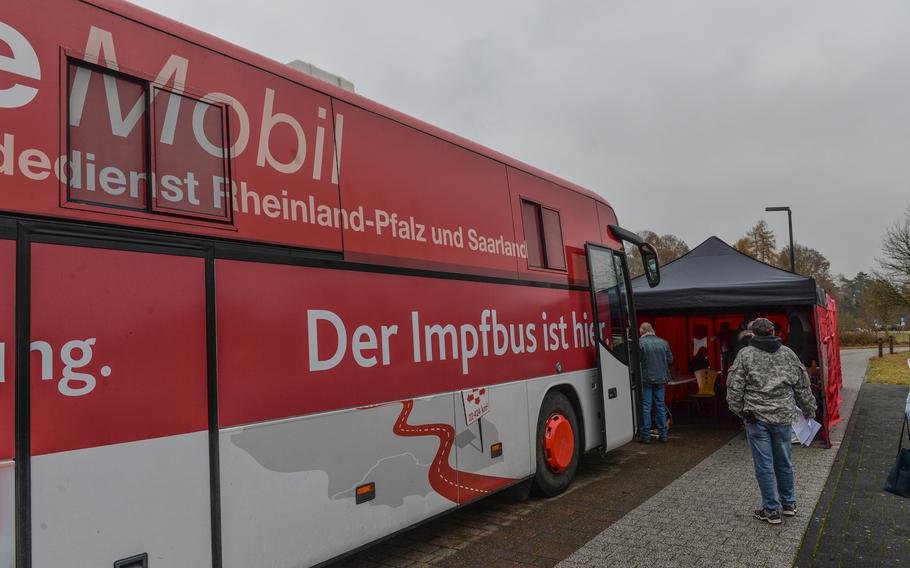 Buy Photo
Patients wait outside a COVID-19 vaccination bus in Hoppstaedten-Weiersbach, Germany, on Nov. 16, 2021. Americans in Rheinland-Pfalz are eligible to receive vaccinations and booster shots from the bus, which travels throughout the state. (Alexander W. Riedel/Stars and Stripes)

KAISERSLAUTERN, Germany — Americans affiliated with the U.S. military who are waiting for COVID-19 booster shots to open to everyone 18 and older may be able to get the additional dose sooner off-base in Germany.

In the state of Rheinland-Pfalz, which includes Kaiserslautern and numerous U.S. military installations, roving vaccination buses are providing free COVID-19 inoculations, including boosters.

Officials from the German Red Cross, which runs the service, have said no appointments are necessary, although wait times can vary.

“Anyone 18 and older can receive a booster shot six months after the second coronavirus shot,” said a post Monday on Rheinland-Pfalz’s official Facebook page.

Vaccination drives for the U.S. general public at military bases in Europe began ramping up in May, so many Americans are just now reaching the six-month mark since their last dose.

A German Red Cross spokesman at the Hoppstaedten-Weiersbach bus location near Birkenfeld said Tuesday that Americans are welcome.

“All will be vaccinated,” said Manuel Borgmann, a spokesman for the agency in Rheinland-Pfalz. “A reported address in Germany is not required, nor is German health insurance.”

Some of the stops this week are in places near U.S. installations, including Mainz, Weilerbach, Trier and Baumholder.

Rheinland-Pfalz has dispatched six buses around the state since August to supermarket parking lots, city centers, sports clubs, schools and leisure facilities. The buses have administered more than 60,000 doses so far. 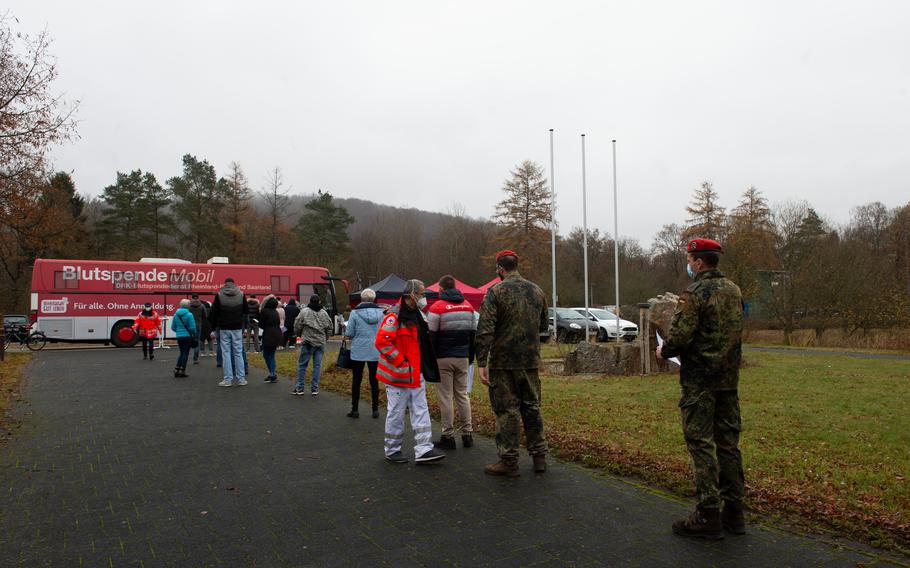 They offer the Johnson & Johnson and Pfizer vaccines. Anyone 18 and older who had the one-dose J&J vaccine at least four months ago may get a booster shot.

The buses will give a Pfizer booster shot to someone who has received two doses of Moderna, which is what many on bases have received. U.S. Centers for Disease Control and Prevention guidelines do allow for receiving a different brand of booster.

Vaccinations are available to children ages 12 to 15 who are accompanied by a legal guardian. Written consent from a parent or guardian is acceptable for children ages 16 and 17.

On U.S. military bases in Europe, booster shots six months after the second dose are restricted to people in certain categories.

They include seniors age 65 and older and anyone 18 and up who has an underlying medical condition or works in a job that puts them at higher risk of contracting the virus. Health care workers, teachers, child care providers and people preparing to deploy are among those in the latter category.

Anyone 18 and older who received the Johnson & Johnson vaccine is eligible for a booster shot two months afterward on military bases.

Guidance from the CDC has yet to expand booster shot eligibility to everyone 18 and older.

Air Force officials at Ramstein Air Base said Tuesday that CDC-approved vaccinations received from German facilities will be recognized by military health officials.

The Army advised people who normally receive military medical care to get vaccinated on base to ensure that the local population has as much access to the shots as possible.

But people who obtain a vaccination or booster from a host-nation medical source should take their documentation to their base medical clinic so it can be put in their records, said Kirk Frady, a spokesman for Regional Health Command Europe.

Other communities in Germany are also providing the vaccine to Americans affiliated with the U.S. military.

In Weiden, near U.S. installations in Bavaria, Americans can get vaccinated at the city’s vaccine center, said Sebastian Seibert, head of administration for the center.

A vaccine bus in Stuttgart also is open for Americans, said Niklas Junkermann, a city spokesman. A schedule is available in German at: https://www.stuttgart.de/leben/gesundheit/infektionsschutz/corona-impfung/offenes-impfen.php.