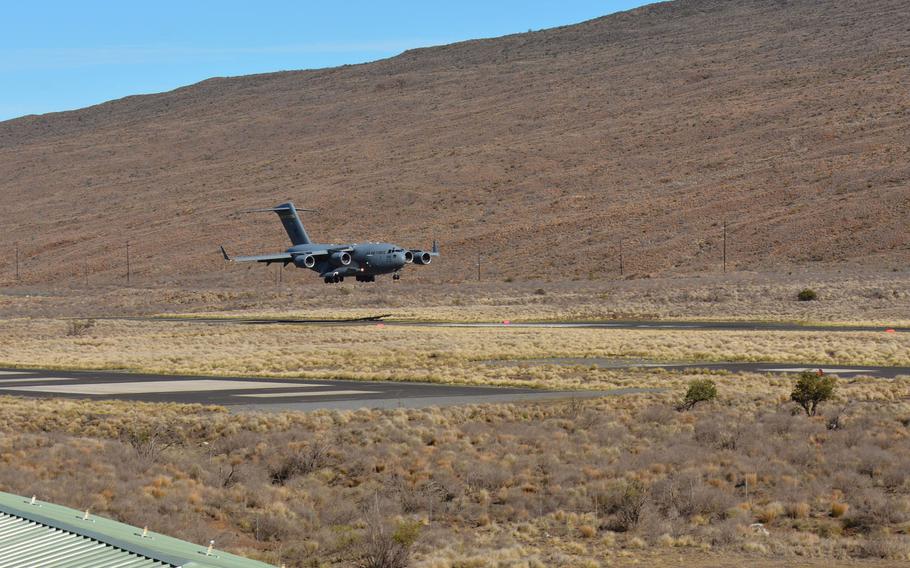 POHAKULOA TRAINING AREA, Hawaii (Tribune News Service) — The Army is hoping to maintain the Pohakuloa Training Area on Hawaii island as its 65-year lease on a parcel of state land that makes up a key part of the range nears expiration.

PTA sits atop a high plateau between Mauna Kea and Mauna Loa and spans 132,000 acres. With fields of lava and volcanic soil, it's classified as a sub-alpine tropical dryland forest and is a habitat for Hawaii's state bird, the nene, the hoary bat and some species that exist nowhere else on the planet.

"This is one of the rarest ecosystems in the world," said Tiana Lackey, an Army biologist who works at PTA.

The training range includes 23,000 acres of former Hawaiian crown lands, also known as ceded lands, that the state leased to the military in 1964 for just $1. The state has since designated the leased land as a conservation district. Over the years the Army has faced lawsuits and investigations over its management of the vast area it controls there.

The lease expires in 2029 and the Army is making its pitch to keep it. The state parcel sits between two federally owned pieces of land that make up the training area. Army officials call the leased land "the connective tissue" of PTA.

As part of the required environmental review process to renew the lease, the Army issued a draft environmental impact statement regarding its future plans earlier this year and requested feedback. State lawmakers and agencies responded to the draft EIS with scathing assessments, accusing the Army of data gaps regarding the effects of its activities on endangered species, a lack of clarity on ordnance cleanup plans and other concerns.

State Sen. Kurt Fevella, (R, Ewa Beach-Iroquois Point), wrote in an April letter to Army leaders that while he understands national security interests, "we also need to consider the health and safety of our people, land, air, and water quality that has continuously been negatively impacted by military training" and that "it would be detrimental for Native Hawaiians, like myself, to stand idly by and relinquish claims to public lands … which we believe were taken without consent or proper compensation."

The draft EIS states that training "may have impacts on soils within the confines of the State-owned land; however, potential impacts to water resources could reach beyond the State-owned land to include the regional aquifers and watersheds." The report also concluded that "the contaminants detected in site soils have a low likelihood to become mobilized off-site due to the low rainfall in the area, lack of streams and absence of a developed drainage system across the State-owned land."

In its comments on the draft EIS, the state Office of Conservation and Coastal Lands wrote that "it appears that military training is in direct conflict of the Conservation District designation."

"The comments are welcome, they're part of the process," said Lt. Col. Kevin Cronin, the garrison commander at PTA who oversees day-to-day operations. "The team is absolutely reviewing and going through each of those comments."

Cronin said it's his job to balance environmental and cultural concerns with the need to keep PTA open for troop training. He said it provides "that large-scale crew and collective training that they need to get that they can't get on Oahu (and) really can't get anywhere else in the Pacific Basin region other than here."

PTA is the largest contiguous live-fire range and maneuver training area in Hawaii. Military leaders say it's one of the only places in the islands where they can carry out large-scale land exercises and artillery practice.

The Army also sees it as central to its new Joint Pacific Multinational Readiness Center, which conducts training in Hawaii and Alaska and in countries around the Pacific region as tensions with China simmer. This month troops from Thailand, the Philippines and Indonesia trained alongside U.S. troops at PTA.

Opponents of continued military use of the land say the state has its own responsibilities to fulfill.

"The state's obligation is to protect those lands for the benefit of the beneficiaries. There's nothing that says they've got to benefit the dang Army," said Clarence "Ku" Ching, a former Office of Hawaiian Affairs trustee and community activist. "Nowadays they're training soldiers from a bunch of foreign countries up at Pohakuloa, which I don't really care for. These guys can go screw up their own lands instead of screwing up ours."

When training isn't taking place at PTA, only five uniformed soldiers are stationed there. Most of Cronin's workforce, about 200 people, is made up of Army civilians and contractors. Among them are scientists working to catalog and preserve native species living on the base.

Lena Schnell, senior program manager with Colorado State University's Center for Environmental Management of Military Lands, showed off several native plants at PTA's greenhouse. Biologists have collected seeds from many native species in hopes of reintroducing them at Pohakuloa.

Lackey, the Army biologist, said the greatest threats to native species are invasive species — both plants and animals — and wildfire. Wild goats and sheep run rampant at the base. Lackey said that between 1998 and 2013, the Army spent $10 million on 15 fencing units at PTA totaling 86 miles and protecting more than 37, 000 acres of native habitat, and on work to manage dry grass to avoid the spread of wildfires.

Cronin admitted that some fires in the area have been the result of training activities but insisted the Army works hard to contain them and coordinates closely with other agencies.

PTA's fire department also assists the Hawaii Fire Department and the state Division of Forestry and Wildlife in battling wildfires beyond Pohakuloa. PTA is also regularly used by other departments for training in wildland firefighting.

Cronin said that through the Defense Community Infrastructure Project, the military gave the state Department of Land and Natural Resources a $2.5 million grant for construction of a new facility for island firefighters to conduct operations and keep equipment.

Cronin also noted that through the Pentagon's Readiness Environmental Protection Integration program, the military has given the state $4.8 million in grants for removal of invasive species, management of dryland areas and protection of cultural resources.

"Soldiers are not allowed to enter caves or lava tubes or anything like that, " said Cronin. "That's all in the interest of making sure that … you're respectful and protective as possible."

But Army leaders rotate in and out of Pohakuloa. Various commanders who have overseen the land in the past haven't always kept their word — or listened to their own experts. In 1989 the Sierra Club sued the Army on behalf of University of Hawaii at Hilo botanist Lani Stemmermann, who had visited an area of dryland forest in PTA in search of research sites to study native plants.

Stemmermann found Army bulldozers leveling native naio and mamane trees for a new training range. A 1993 Army investigation found that while planning the range, officials cut corners during the survey process, intentionally limited access to scientists and ignored recommendations by Army engineers that called for a comprehensive botanical study of the proposed site.

In 2019 the Hawaii Supreme Court ruled against the state in a lawsuit filed by the Native Hawaiian Legal Corp. on behalf of Ching and fellow Hawaiian activist Mary Maxine Kahaulelio. The court found state officials had failed to ensure the military upheld its duties to clean up Pohakuloa and had harmed Hawaiian cultural interests, and that "as trustee, the State must take an active role in preserving trust property and may not passively allow it to fall into ruin."

When it comes to land that falls within a conservation district, the Army maintains that because training on the leased land is a pre-existing use that predates the conservation district designation, military use of Pohakuloa is lawful under its interpretation of state administrative rules.

Ching countered that because the state, not the Army, owns the land, it should have the final say.

The lease requires the military to "make every reasonable effort to … remove or deactivate all live or blank ammunition upon completion of a training exercise or prior to entry by the said public, whichever is sooner." But what precisely constitutes a "reasonable effort" has been subject to debate.

Live explosives are fired only into an "impact area" located on federally owned land rather than on the state parcel. Since the Army considers the impact area an active range, it does not remove unexploded ordinance from that area.

Activists and some researchers have charged that the Army has never done a proper survey of the impact area to see what endangered species or ancient Hawaiian history may exist there.

PTA's cultural resources director Heidi Miller said there have been efforts at surveys but that "to date, we don't have any recorded sites in that area. That doesn't mean that as we do more surveys in the future, that you won't find anything. But as of right now we don't have any."

The draft EIS contains a range of options for the lease extension. The Army's preferred option is full access to the 23,000 acres of state land. The Army also proposed retaining access to 19,700 acres, or retaining 10,100 acres along with 11 miles of select roads and trails to continue training.

Its least-preferred option, the "no action alternative," would have the Army's presence at Pohakuloa potentially end when the lease expires in 2029.