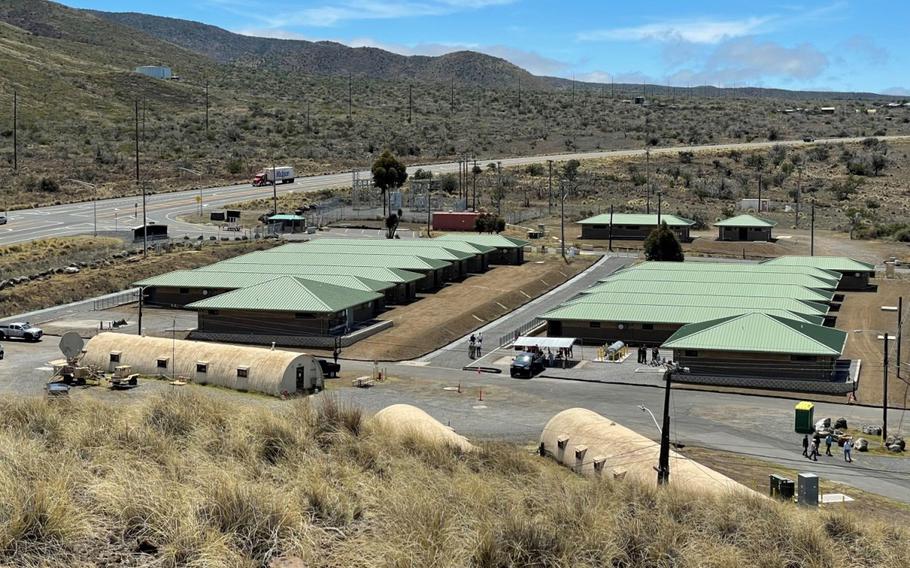 The Army dedicated 20 new barracks at Pohakuloa Training Area on Hawaii’s Big Island on April 26, 2022, replacing Korean War-era Quonset huts such as those standing in the foreground. (U.S. Army)

Construction took two years at a cost of $17 million, Lt. Col. Kevin Cronin, commander of the training area, said in a phone interview Wednesday. He oversaw a dedication ceremony Tuesday that included a traditional Hawaiian blessing.

The 132,000-acre Pohakuloa Training Area replicates the kind of austere conditions troops could expect to face in combat. U.S. soldiers and Marines, as well as troops from partner and ally nations, use the area for live-fire training, including heavy artillery and missiles.

“We’re the premier Pacific training area where [troops] reach the highest level of readiness,” Cronin said. “It’s great to have new buildings and new facilities for our troops to come here to train.

“Anything that allows the troops to focus on training — what they’re here to do — is important,” he said.

The Quonset huts are prone to overheating in the sun and becoming too cold at night, he said. Rodents have encroached on the buildings over the decades.

The Quonsets were built in the 1950s, primarily by soldiers with the Hawaii Army National Guard’s engineer units, Cronin said.

Each new barrack is designed to house 50 individuals, he said. The next 80 barracks will be built over roughly the next decade, with the entire project costing about $200 million.

It is being done in phases, with two rows of Quonsets to be demolished in each stage.

There is no requirement from a historical preservation standpoint to save any of the Quonsets, said Cronin, but added that from a personal standpoint he would like to see a couple stay standing.

“I would like to see [saved] the Quonset hut chapel — which is the only Quonset hut chapel in the Department of Defense — and the theater, which is located next to the chapel,” he said. “We would still use them, but as two remnants of where we came from here at PTA. It’s always important to remember our legacy.”

That history goes back to December 1943, when Marines from the 2nd Marine Division arrived on the Big Island to train and refit after the Battle of Tarawa a month earlier, Cronin said.

“Then they went off to their victories in the Pacific — Saipan, Tinian and Iwo Jima, to name a few,” he said.

The size of the training area continued to grow, and in 1964 the Army signed a 65-year lease with Hawaii for about 23,000 acres of state land.

The Army is attempting to renew that lease before it expires in 2029. It is seeking public comment on the draft environmental impact statement for that renewal.

Securing a new lease is no small matter for the Army because that state land fully surrounds the 758 acres of federal land that include the training area’s airfield and cantonment — including all those rows of soon-to-be-built barracks.

Few of the dozens of people who showed up to public hearings on Monday and Tuesday evenings on the Big Island expressed support for the renewal.

“We gotta say, stop the leases,” Maxine Kahaulelio, a longtime community organizer in Hawaii, said at Tuesday’s hearing in Waimea. “No more military. Go home. We wanna throw you guys a luau in 2029 — the biggest luau you guys want — and then escort you guys out of our island and say, ‘Mahalo.’”

Kalani Flores, another frequent critic of the training range, said at the hearing Tuesday that Pohakuloa is an incompatible location for the live-fire training because it is the “energetic center of the island” and every explosion and gunshot causes “an energetic disturbance on our island that has far more repercussions than you can understand.”

Cronin seemed to take such opposition in stride when asked during the interview for his impression of the hearings.

“I welcome those comments and comments across the stakeholder spectrum because that’s part of the process,” he said.