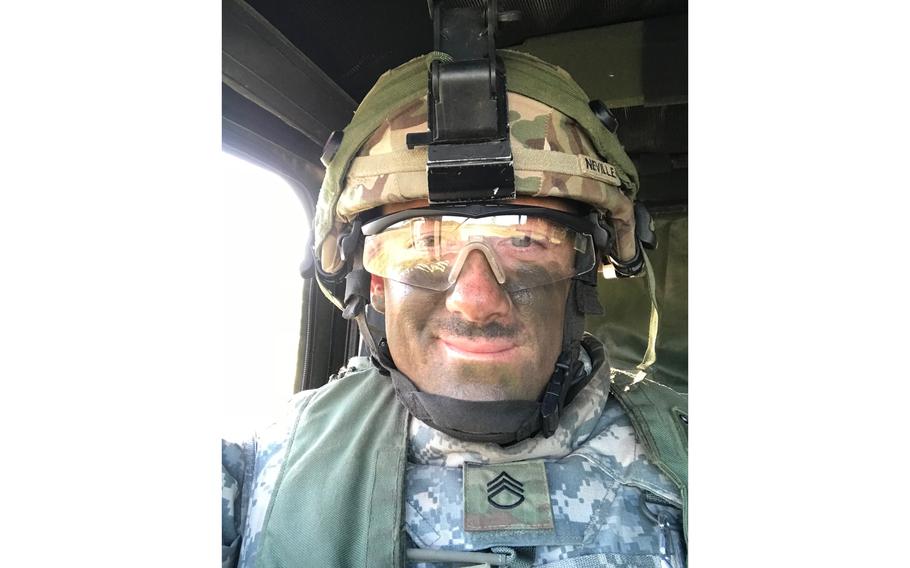 Staff Sgt. Ryan Neville of the Army Reserve’s 739th Multi Role Bridge Company in Illinois was separated from the Army on Oct. 1, 2022, for a reprimand based on sexual assault charges determined to be unfounded by a three-officer separation board. After the board’s decision, the general who issued the reprimand declined to remove it. (Photo provided by Ryan Neville )

In the summer of 2019, Staff Sgt. Ryan Neville learned a soldier in his Army Reserve unit had accused him of inappropriately touching her — once during a night of bar hopping and again during a demonstration on rope tying.

Instead of a court-martial, Neville, who is a member of the 739th Multi Role Bridge Company in Granite City, Ill., received a reprimand in his file that triggered a review by an Army separation board.

Known as a General Officer Memorandum of Reprimand, or GOMOR, the disciplinary memo landed in Neville’s file in August 2020 and summarized a criminal investigation that found probable cause Neville had committed two counts of abusive sexual contact and one of sexual harassment. The Army Criminal Investigation Division’s report on the case stated the evidence was based on interviews with the victim and witnesses.

Neville refuted the charges from the start, spent thousands of dollars on a lawyer and won his case before the separation board. The three-officer board unanimously agreed the interviews and evidence presented at the hearing did not support the charges described in the GOMOR. The board said in May 2021 that Neville should be retained in the Reserve.

But the Army still discharged Neville on Oct. 1, according to a memo that the soldier received from Human Resources Command.

“What's the whole point of a separation board if ultimately all it did was just delay the process. Maybe it bought me another year of trying to fight. It's pointless,” said Neville, 35, who enlisted more than 12 years ago as a bridge crew member. “I believed in the system. I had also a lot more respect for the values and everything that the military stands for. I wasn't going to start bashing it or anything. I respected the process, but now it's just — the process is f-ed up.”

The board’s decision didn’t remove the reprimand from his file, and when he wrote to three generals to have it removed based on the decision, they all declined, including the now-retired Maj. Gen. Darrell Guthrie, who wrote the GOMOR. None would even meet with Neville, he said.

When Neville filed an appeal with Guthrie to have the GOMOR removed from his file, he included a 12-page letter supporting him from Maj. Jamie Zinkann, the Army lawyer who presented evidence against Neville at his separation hearing.

“I fully support the removal and destruction of SSG Neville’s GOMOR from his [permanent file] based on the findings of the board of officers and on the entirety of the completed investigation. SSG Neville has endured financial hardship, extreme emotional distress, career regression, and now faces losing his career and employment in a matter of months due to the GOMOR and resulting [Qualitative Management Program discharge],” Zinkann wrote.

Guthrie only responded in writing that he wouldn’t remove the reprimand, Neville said. The general retired in August and returned to his civilian career in Texas as an attorney.

“Where’s the checks and balances on that?” Neville asked. “I would like it to be explained.”

The GOMOR’s filing also triggered a Human Resources Command review of his record through the Army’s Qualitative Management Program, or QMP. The program’s board determined Neville would be honorably discharged, even though he provided them the results of the separation board.

The QMP and separation boards fall under different “regulations and authorities” within the Army and do not share information, according to the service and military law experts.

The Army declined to comment about Neville’s case, citing privacy concerns. The service also could not provide information about how common the use of separation boards is among troops.

“The Army Reserve is committed to the fair treatment of all soldiers and civilians,” John Bradley, spokesman for the Army Reserve, said in a statement. “Allegations of misconduct are taken seriously and reviewed under applicable, controlling regulations. Soldiers who face administrative actions such as separation boards, reprimands or review under the Qualitative Management Program are afforded due process to present whatever matters they deem appropriate and to ensure all evidence is considered by the applicable decision authority.”

For more than a decade, the military has pledged to get a handle on the growing number of sexual assaults in the ranks, yet data shows that incident reports are increasing. The most recent Defense Department report released in August showed a 13% increase in sexual assaults. The Army specifically saw a 26% increase in reports.

The death of Army Spc. Vanessa Guillen in April 2020 at Fort Hood, Texas, was a tipping point for the military. Her family said Guillen was sexually harassed while assigned to the base, but she did not feel safe reporting it. It spawned a national movement that called for major reforms.

The Army has since begun a complete overhaul of its Sexual Harassment/Assault Response Prevention program, known as SHARP, and its Criminal Investigation Division, based on the recommendations of an external investigation. Congress passed judicial reforms in December 2021 that no longer allow commanders to decide whether a sexual assault case goes to a court-martial. Instead, the military is establishing a special prosecutors’ office to determine which cases move forward in the judicial system.

Yet Neville’s case is another example of the Army’s broken system for managing sexual assault and harassment allegations, showing how the process has swung too far in the other direction, said Michael Pike, a retired first sergeant who worked alongside Neville at the time of the allegations.

“Many people out there legitimately need [the system] to be there and to be strong for them” he said.

Neville’s case took place as his company’s higher headquarters, the 416th Theater Engineer Command, which became the subject of a report by The Associated Press in January 2020 that initiated the Army to conduct an internal investigation. The AP reported the command was not referring sexual assault complaints for criminal investigation but instead trying to handle them internally.

The allegations against Neville were not investigated internally, however. The unit’s victim advocate brought the report to CID on June 26, 2019, and agents began interviews two weeks later, according to CID records provided to Stars and Stripes.

The Army’s internal review of the 416th Theater Engineer Command ended in May 2021 and resulted in a general and a dozen soldiers facing disciplinary action for having mishandled sexual harassment and sexual assault reports and not properly implementing the SHARP program.

The investigation also resulted in Neville’s case being moved from the 416th to the purview of the 88th Readiness Division.

Neville said he believes his association with this public embarrassment of the SHARP program is why he was forced out despite the separation board ruling. He said he thinks it is why no general was willing to remove the GOMOR after it was determined to be unfounded by the separation board.

“I have a letter of support from my company commander, my battalion commander, my brigade commander. There are multiple people that are very privy to this case and don't agree what's going down, yet it seems like no one can do anything about it,” Neville said.

Separation boards and “unfavorable information,” such as a GOMOR, are governed by separate regulations and authorities, said Maj. Jacqueline Wren, an Army spokeswoman. For a soldier to have a GOMOR removed after a board deemed it unfounded, the soldier would have to file an appeal with the Army’s Suitability Evaluation Board.

Neville’s request to have his case reviewed was denied, according to a June memo to the soldier from the board.

Because the procedures are separate, and each soldier’s situation is unique, the Army does not track QMP separations based on disproven GOMORs, Wren said.

“Legally speaking, it's not uncommon to get a GOMOR, and then later on have a separation board and then after that, find out the QMP results. That is relatively common,” said Robert Capovilla, a founding partner of the law firm Capovilla & Williams and a former Army judge advocate. “What is uncommon is that the QMP board would still move to separate knowing that he won his separation board. That is strange to me.”

The QMP looks specifically at the records of noncommissioned officers between the ranks of staff sergeant and command sergeant major who received some form of discipline in their file to make certain that they “serve in a manner consistent with good order and discipline,” according to Human Resources Command’s website. Once the QMP board decides to separate someone, the soldier can’t appeal it. Reconsiderations are authorized only if a document was removed or significantly modified since the date that the review began, or if there was an error in the file.

For those soldiers who are found not guilty and find a way to stay in the Army, Capovilla said their careers are still severely impacted. During the time a case is open, a soldier’s career is essentially on hold. In cases of a court-martial, a not-guilty verdict still allows a case to appear in a background check unless the person can successfully lobby their service’s board of corrections, the attorney said.

Neville said he had wanted to be a soldier since he was a child and had planned to stay in the military until retirement. Though he lived out that part of that dream, the past couple years left him feeling bitter about his service.