101st Airborne soldiers are among additional 3,000 US troops deployed to Poland 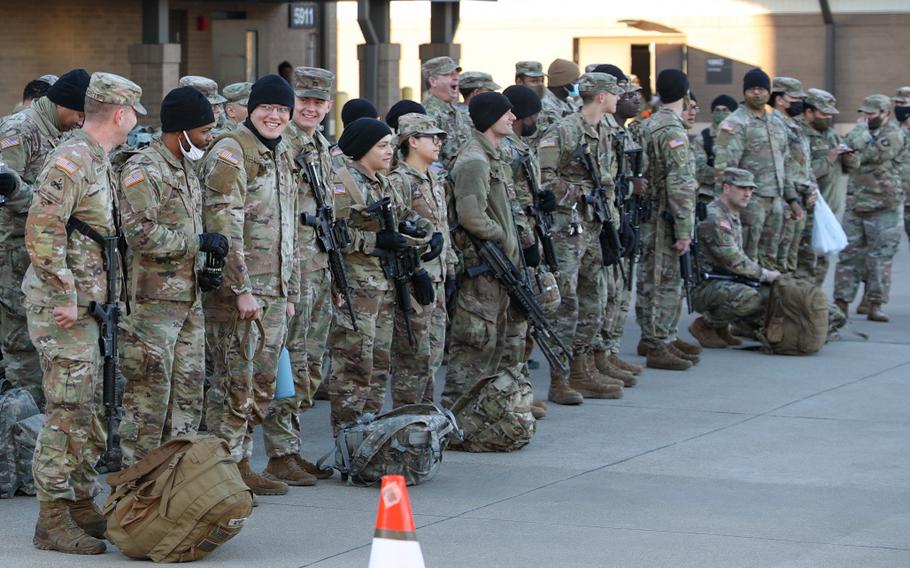 Soldiers from Headquarters and Headquarters Battalion, 101st Airborne Division, gather to get further instructions from company leaders and any last minute tasks to be completed during a deployment readiness exercise on Feb. 8, 2022, at Fort Campbell, Ky. Soldiers from the 101st Airborne are among the 3,000 additional U.S. troops deploying to Poland to help NATO allies fortify their defenses as a possible Russian invasion of Ukraine looms, Army officials said Tuesday, Feb. 15, 2022. (Kendall Lewis/U.S. Army)

WASHINGTON — Soldiers from the 101st Airborne Division at Fort Campbell, Ky., are among the 3,000 additional U.S. troops deploying to Poland to help NATO allies fortify their defenses as a possible Russian invasion of Ukraine looms, Army officials said Tuesday.

A U.S. official, who spoke on condition of anonymity Friday, omitted the 101st Airborne soldiers from the deployment announcement that stated all 3,000 troops were from the 82nd Airborne Division at Fort Bragg, N.C.

The soldiers of the 101st and 82nd airborne divisions are joining about 1,700 soldiers that Pentagon officials said they would deploy to Poland from Fort Bragg on Feb. 2. Those soldiers are also part of the 82nd Airborne.

The 101st Airborne troops have been preparing for this deployment “for several weeks,” said Lt. Col. Kari McEwen, a division spokeswoman. They were among the 8,500 troops that Defense Secretary Lloyd Austin put on heightened alert for possible deployment to Eastern Europe on Jan. 24.

The deployment comes as tensions simmer in Eastern Europe over more than 100,000 Russian troops being positioned in recent weeks along the border of Ukraine. Russian officials have denied they plan to launch an attack on Ukraine, but NATO members including the U.S. have expressed concern Russia could invade the country as it did in 2014 when it annexed the Crimean Peninsula.

President Joe Biden is scheduled Tuesday to make a public address about Ukraine.

He is expected to “reiterate that the United States remains open to high-level diplomacy in close coordination with our allies, building on the multiple diplomatic off-ramps we and our allies and partners have offered Russia in recent months,” the White House said. “The United States continues to believe diplomacy and de-escalation are the best path forward but is prepared for every scenario.”

The 101st Airborne is known for its expeditionary air-assault capability to conduct forcible entry “and other worldwide unified land operations in support of combatant commanders,” according to the Army. The 82nd Airborne also specializes in joint forcible entry operations and is capable of rapidly deploying within 18 hours of notification.

“All told, these [nearly] 5,000 additional personnel comprise a highly mobile and flexible force, capable of multiple missions,” the U.S. official said Friday. “They are being deployed to reassure our NATO allies, deter any potential aggression against NATO’s eastern flank, train with host-nation forces, and contribute to a wide range of contingencies.”

They join about 4,000 U.S. service members already in Poland on a regular rotational basis. Some of those troops are part of the U.S.-led NATO battle group in Poland, which is a multinational force of roughly 1,000 troops.

Poland is a NATO ally, which the U.S. as part of the alliance pledges to help if attacked. While there have not been any threats of a Russian invasion of Poland, it is one of four NATO allies that border Ukraine, along with Slovakia, Romania and Hungary.

In addition to the troops' defensive capabilities, chief Pentagon spokesman John Kirby said last week that troops in Poland could also be called upon to assist people leaving Ukraine by ground at its border with Poland.

On Friday, National Security Adviser Jake Sullivan said Americans in Ukraine should leave the country immediately as the risk of a Russian invasion had risen.

“The threat is now immediate enough that this is what prudence demands,” he said during a White House briefing. “If you stay [in Ukraine], you are assuming risk with no guarantee that there will be any other opportunity to leave and there is no prospect of a U.S. military evacuation in the event of a Russian invasion.”

The U.S. has begun temporarily relocating its embassy in the Ukrainian capital Kyiv to the city of Lviv, which is farther west, “due to the dramatic acceleration in the buildup of Russia forces,” Secretary of State Antony Blinken said Monday.

Kyiv is approximately 100 miles from Ukraine’s northern border with Belarus, where Russia also stationed troops last month. Lviv is about 50 miles east of its border with Poland.

However, the Russian Defense Ministry on Tuesday said it began sending some troops back to their bases after completing military exercises. Details about the number of troops returning were not provided.

“As the combat training measures are completed, the troops, as always, will make marches in a combined way to the points of permanent deployment,” the ministry said in a statement. “The units of the Southern and Western military districts, having completed their tasks, have already begun loading onto rail and road transport and will begin moving to their military garrisons today.”

“On Russian statements regarding withdrawal of some forces from the Ukrainian border, we in Ukraine have a rule: We don’t believe what we hear, we believe what we see,” Kuleba said. “If a real withdrawal follows these statements, we will believe in the beginning of a real de-escalation.”