No sign yet of Russian pullback from Ukraine border, NATO says 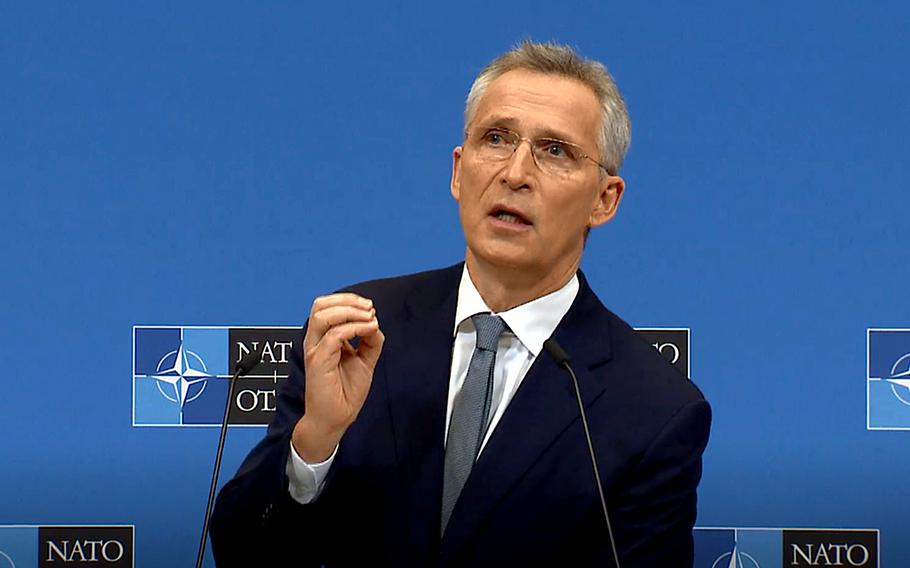 NATO Secretary-General Jens Stoltenberg answers a question from a reporter at the organization’s headquarters in Brussels, Feb. 15, 2022, a day before U.S. Defense Secretary Lloyd Austin and other allied defense ministers are to meet there to discuss Russia’s military buildup around Ukraine. (NATO)

NATO’s top official cast doubt Tuesday on a Russian claim that it had begun pulling some forces away from Ukraine’s borders, saying Moscow still has enough firepower assembled to launch a cross-border invasion on short notice.

“So far, we have not seen any de-escalation on the ground,” NATO Secretary-General Jens Stoltenberg said ahead of two days of high-level talks at alliance headquarters in Brussels. “We have not seen any signs of reduced Russian military presence on the border of Ukraine.”

“All we have seen unfortunately is escalation,” Smith told reporters in Brussels.

On Tuesday, Russian military officials announced some troops from its southern and western military districts near the Ukrainian border were returning to their garrisons.

Stoltenberg, however, said moving troops around is routine and doesn’t affect Russia’s ability to attack.

“Russia often moves troops back and forth,” Stoltenberg said. “What we need to see is a significant and enduring withdrawal of forces, troops and not least the heavy equipment.”

However, Stoltenberg did say recent statements from Russian officials about continuing diplomatic talks focused on Ukraine were grounds for “cautious optimism” going forward. 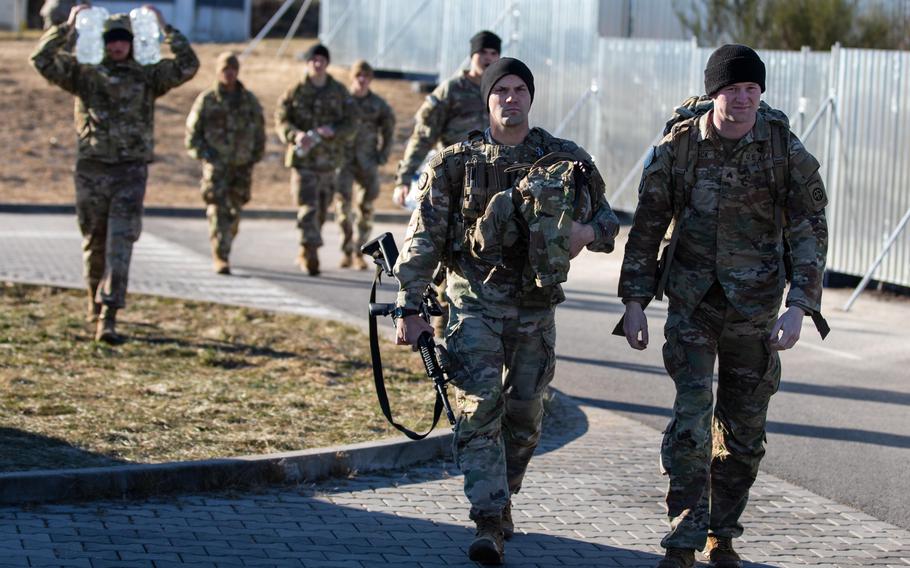 Paratroopers assigned to the 82nd Airborne Division carry their equipment and supplies to their vehicles before departing the G2A Arena in Rzeszow, Poland, Feb. 12, 2022. U.S. Defense Secretary Lloyd Austin is headed to Brussels, Belgium, to discuss Russias military buildup near Ukraine with NATO defense ministers on Wednesday and Thursday. (Alexander Burnett/U.S. Army)

On Wednesday, U.S. Defense Secretary Lloyd Austin and other alliance leaders will arrive in Brussels, where they are expected to review plans for adding troops in southeastern Europe. Among the steps likely to gain the backing of allies is a plan to set up a French-led multinational battlegroup in Romania.

Romania and other nations in the Black Sea region have called for more alliance attention along NATO’s southern flank in connection with concerns about Russia’s nearby military presence. In 2014, Russia annexed the Crimean Peninsula, which is part of Ukraine’s southern Black Sea border.

Russia has boosted its naval presence in the Mediterranean and Black seas in recent weeks, while massing more than 130,000 troops around Ukraine along with tanks, artillery and rocket systems, according to U.S. officials and satellite imagery.

“NATO allies have been very clear that any further Russian aggression against Ukraine would come at a high price,” Stoltenberg said.

President Joe Biden has ruled out any direct role for the U.S. military inside Ukraine in response to any possible Russian attack. Still, the Pentagon has deployed additional troops to Europe in a move designed to reassure allies worried about potential Russian aggression beyond Ukraine.

The first of some 5,000 U.S.-based troops are now taking up positions in Poland. Meanwhile, 1,000 Germany-based U.S. soldiers have shifted to Romania to reinforce allied defenses.