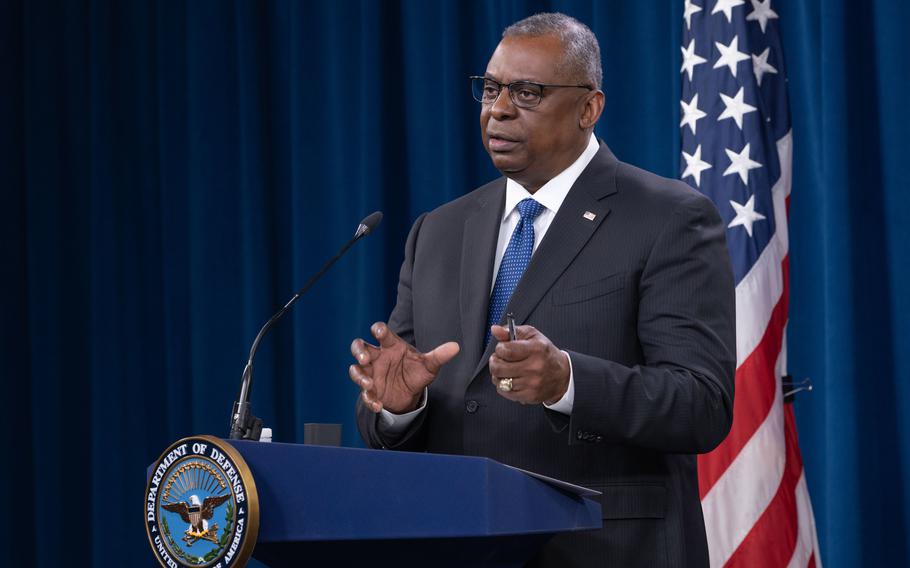 Defense Secretary Lloyd Austin during a news briefing at the Pentagon on Jan. 28, 2022. Austin will leave for a trip to Europe on Tuesday, Feb. 15, 2022, to speak with defense officials in Belgium, Poland and Lithuania as the potential of a Russian invasion of Ukraine continues to increase, chief Pentagon spokesman John Kirby said. (Taryn Sammet/Department of Defense)

WASHINGTON — Defense Secretary Lloyd Austin will leave for a trip to Europe on Tuesday to speak with defense officials in Belgium, Poland and Lithuania as the potential of a Russian invasion of Ukraine continues to increase, chief Pentagon spokesman John Kirby said.

In Belgium, Austin will meet with NATO leaders and defense ministers “to discuss Russia’s military buildup in and around Ukraine, continue the alliance’s progress on deterrence and defense while ensuring the alliance is prepared to face tomorrow’s challenges,” Kirby said Monday.

Article 5 of the NATO treaty is known as the principle of collective defense, meaning “an attack against one ally is considered as an attack against all allies,” according to the alliance. If the article is invoked, NATO members agree to assist the attacked country.

Austin will meet with Poland’s president and defense minister while in that country, where the U.S. deployed about 4,700 troops of the 82nd Airborne Division from Fort Bragg, N.C., in the past two weeks as tensions simmered with Russia.

Austin will also visit U.S. and Polish troops at Powidz Air Base “to tour the facilities and observe the culture and conditions of our rotational presence there,” Kirby said.

In Lithuania, Austin will meet Lithuania’s president, prime minister and defense minister to reaffirm the U.S. commitment to “working together to strengthen the Lithuania armed forces and continuing to stand shoulder-to-shoulder against threats and adversaries to advance shared interests and values,” Kirby said.

Austin will also meet with the Estonian and Latvian defense ministers in Lithuania, and later visit U.S. service members stationed there, Kirby said.

The defense secretary’s trip comes as threats of an impending Russian invasion continue to grow. National Security Adviser Jake Sullivan on Friday said Americans in Ukraine should leave the country within the next 48 hours as the risk of a Russia invasion of Ukraine has risen.

“The threat is now immediate enough that this is what prudence demands,” he said during a White House briefing. “If you stay [in Ukraine], you are assuming risk with no guarantee that there will be any other opportunity to leave and there is no prospect of a U.S. military evacuation in the event of a Russian invasion.”

Kirby did not say whether a Russian invasion of Ukraine would impact the secretary’s travel schedule.

“We'll have to see, obviously, how things play out,” he said.

In December, Russia began amassing its troops along its border with Ukraine, and last month started adding troops to Ukraine’s northern border with Belarus for what Russia said were exercises with that country.

While Russia has denied accusations of plotting an invasion, NATO nations, including the U.S., have expressed concern in recent weeks that the buildup could mean Russia intends to invade Ukraine, as it did in 2014 when Russia annexed the Crimean Peninsula.

“[Russia hasn't] been at all transparent about what they intend to do with this massive buildup,” Kirby said. “It strains credulity to think that they would have this many troops arrayed along the border with Ukraine and Belarus simply for winter exercises."

Russia has asked NATO to bar future Ukrainian membership to the alliance and remove all foreign troops and equipment from Eastern European countries that joined NATO during the past 25 years. NATO, and the U.S. independently, have denied those requests.

Zelenskyy said in a video posted to Facebook on Monday that he was told Russia would invade Ukraine, declaring that day a national “Day of Unity” to strengthen his country’s “resilience in the face of growing hybrid threats.”

However, the president’s spokesman, Sergii Nykyforov, later walked back the comment, saying Zelenskyy was referring to media reports of a possible invasion date, not military intelligence, NBC News reported.

Kirby said the U.S. still doesn’t believe Putin has decided whether he will send troops into Ukraine, though Russia continued to add military equipment along the Ukrainian border with Belarus.

“[Putin] is exercising some of his units on the ground there in the south, as well as naval units in the Black Sea,” he said. “He continues to add to his readiness, he continues to give himself more options should he pursue a military path here.”

“He is doing all the things you would expect him to do to make sure he's ready for that option,” Kirby added.