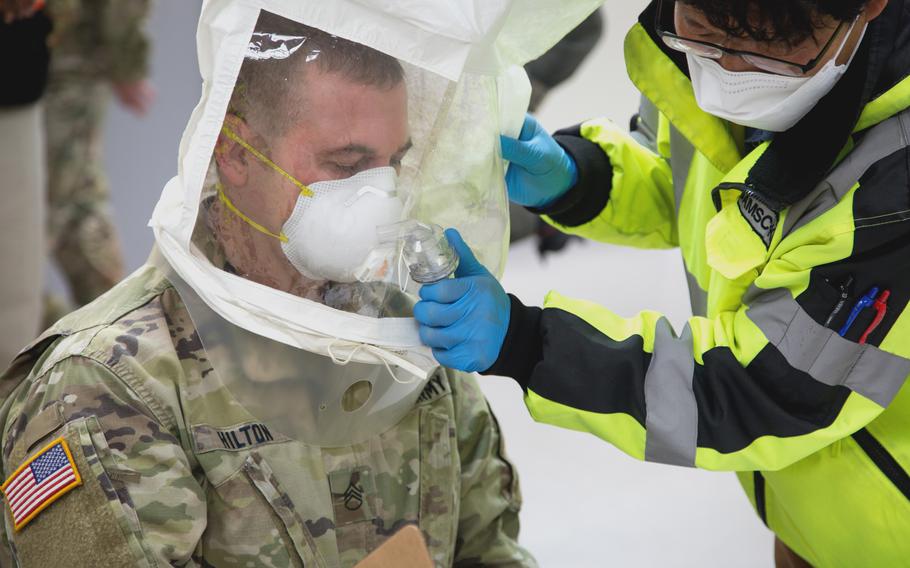 A soldier of the 19th Expeditionary Sustainment Command tests a respirator to ensure a proper fit during COVID-19 prevention training at Camp Carroll, South Korea, on March 24, 2020. (Hayden Hallman/U.S. Army)

USFK reported 457 locally generated coronavirus cases between Dec. 21 and Monday, and another 10 cases among recent arrivals to South Korea.

Army Col. Seth Graves, garrison commander at Camp Humphreys, the largest U.S. base overseas, in an announcement Wednesday on Facebook said the spike in cases “is like nothing we’ve seen here on the installation since the beginning of the pandemic.”

Graves did not specify numbers at Humphreys but said the increase of confirmed cases was “not unique” to the garrison.

The new USFK tally far surpasses the previous weeklong record of 58 cases in July. Thirty-one of those cases were from Camp Casey, roughly 15 miles from the border with North Korea.

The surge in U.S. military cases follows a new one-day record in South Korea itself of 7,849 confirmed cases on Dec. 15, according to the Korea Disease Control and Prevention Agency. It reported another 5,409 on Tuesday.

USFK spokesman Army Col. Lee Peters, in an email Wednesday to Stars and Stripes, said component commands are authorized “to analyze the associated risk in their formation and communities and implement mitigation measures to maintain their ‘fight tonight’ mission readiness posture.”

Protection of the force remains the No. 1 priority, Peters said. USFK also “strongly encourages” its community to get fully vaccinated and receive vaccine booster shots, he added.

The command requires its personnel, regardless of their vaccination status, to wear face masks “at all indoor settings on installations” within districts with 50 or more confirmed COVID-19 cases per 100,000 people over a period of seven days.

USFK previously banned all personnel from visiting any of the “hot spot” districts in the country but revoked the restriction last month due to its relatively high vaccination rates and to “better align with” the South Korean government’s plans.

USFK, which oversees roughly 28,500 American troops on the Korean Peninsula, did not identify the bases where the new cases originated.

Earlier in the pandemic, the command provided details on the origin and status of the new cases, and whether they were uniformed personnel, civilian employees or family members. It stopped that practice last month to “align” its reporting with the South Korean government and the Defense Department.

Several government offices and restaurants at Camp Humphreys were temporarily closed this week due to breakouts and testing.