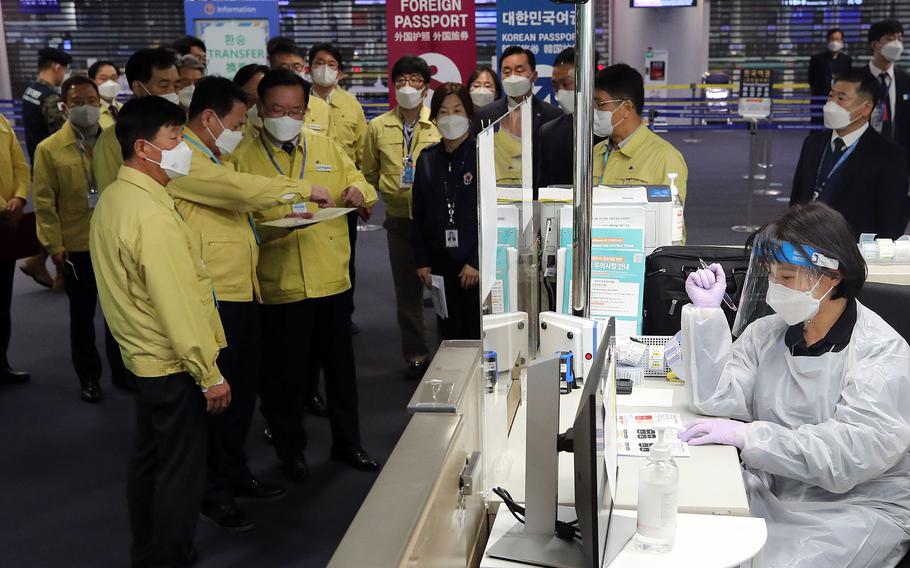 The country’s previous daily high was 7,174 new infections on Dec. 7. Wednesday’s number had not been released as of 5 p.m.

South Korean President Moon Jae-in last week described the increasing caseload as a “rigorous situation” exacerbated by the new omicron variant, which has been detected in over 100 people in the country, according to the Korea Disease Control and Prevention Agency.

“The next four weeks from now is a critically important time,” Moon said during a cabinet meeting Dec. 7. “Once again, we ask the people’s active participation in vaccination.”

The KDCA also reported a new record of 964 hospitalizations of patients with moderate to severe symptoms, up from 906 on Monday.

Around 40% of the new cases reported Tuesday, 3,166, stemmed from Seoul. Another 2,299 cases, or 30%, were reported from Gyeonggi province, the home of Camp Humphreys and Osan Air Base.

Prime Minister Kim Boo-kyum on Wednesday said the government was exploring new social distancing measures amid the surge of new cases, including reducing business hours and lowering the limit on the number of people permitted in public gatherings.

Despite efforts to curb the spread in recent weeks, health officials grew “extremely frustrated with almost no improvement in anti-epidemic indicators," Kim said.

“Although we strengthened quarantine measures, including the reduction of the number of personnel who hold private gatherings and the expansion of vaccine pass, the degree of risk throughout the country has been assessed ‘very high’ for three consecutive weeks,” he said.

The looming changes follow the postponement of the government’s “Living with COVID-19” scheme unveiled last month that would have gradually rolled back social distancing measures. Under the plan, the restrictions would have been eased over three, four-week phases.

The plan was eventually delayed after an uptick of new cases during the first phase in November.

Nearly 84% of the country’s 51 million people has received the first dose of a vaccine and 81.4% are fully vaccinated as of Wednesday, according to the KDCA. Over 7.9 million people have received a booster shot.

U.S. Forces Korea, the command responsible for roughly 28,500 troops on the peninsula, reported 24 new cases between Nov. 30 and Dec. 6.

USFK announced on Dec. 3 it would begin imposing a 10-day quarantine for inbound personnel in light of the host nation’s updated COVID-19 measures.