U.S. Air Force Maj. Aubrey Reid gives a booster shot to Yetta Lewis at a COVID-19 vaccination drive hosted by Landstuhl Regional Medical Center at Kleber Kaserne in Kaiserslautern, Germany, on Dec. 8, 2021. The Army has administered an estimated 25,000 booster doses to date at its base clinics in Europe. (William Beach/LRMC)

KAISERSLAUTERN, Germany — The slow rollout of COVID-19 vaccine boosters to the U.S. military community in Europe has given way to ramped-up efforts to get the additional jab to everyone who’s eligible as quickly as possible.

And in many locations, appointments are being scooped up as soon as they become available.

In the past week alone, the Army nearly doubled the number of booster shots administered at its base clinics on the Continent, Gino Mattorano, a spokesman for Regional Health Command Europe, said Tuesday.

At the end of November, the Army had vaccinated about 4,100 individuals with a booster, less than 5% of the estimated 100,000 people at Army bases in Europe eligible for vaccinations. Mattorano estimated that the total now stands at about 25,000.

Initially, the Army had intended to expand its booster campaign after the holidays while it focused on administering the pediatric vaccine, which was recently approved for children 5 to 11.

But with Germany and other European countries that host American troops experiencing a record surge in cases and high demand for the booster, the Army reversed course and opened more appointments.

The Army’s last vaccination clinics before the holidays will be Monday, Mattorano said.

On Monday, Ramstein Air Base opened more booster appointments Friday for its last scheduled vaccination clinic before the holidays.

By the end of the day Monday, time slots for all of the approximately 600 sessions were gone, according to an online appointment site. 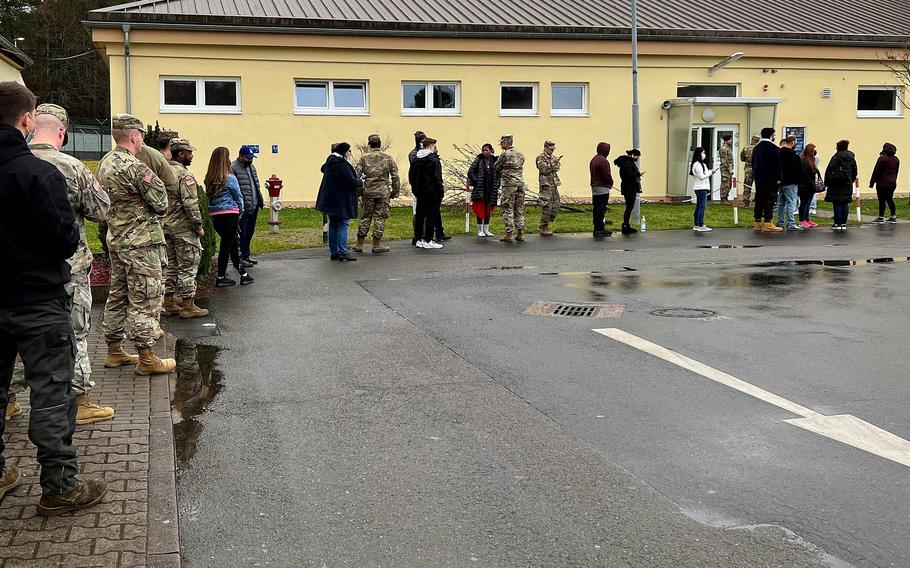 Walk-ins wait in line to get COVID-19 booster shots at the Dec. 8, 2021, vaccine rodeo at the Kleber Kaserne gym in Kaiserslautern, Germany. Demand for booster shots is tremendous, and appointments for them are being snapped up almost immediately. (Eleanor Prohaska/U.S. Army)

For the four vaccination clinics scheduled at Ramstein in January, only one time slot on Jan. 7 was still available as of Tuesday morning.

Ramstein medics have administered about 2,200 booster vaccines, both Moderna and Pfizer, base spokesman Lt. Col. Will Powell said in a statement Monday.

“The process remains fluid,” he said. “As cancellations occur, appointments open up.”

Most bases are using the Defense Health Agency’s online portal for appointments. It allows people to make more than one appointment for the same shot. Military officials said it’s important for users to cancel previous appointments and not double-book.

However, there is no penalty for neglecting to cancel previous appointments, and it is permissible to make multiple appointments simultaneously to accommodate other family members.

In some German states, including Rheinland-Pfalz, home to tens of thousands of U.S. personnel, a booster shot negates vaccinated individuals’ testing requirement for indoor dining and other activities.

Germany’s new government is looking at applying that exemption across the nation to encourage more booster shots and relieve testing capacity.

Booster shots for people ages 16 and 17 are still hard to get, depending on location. The Centers for Disease Control and Prevention and the U.S. Food and Drug Administration recently approved boosters for older teens.

LRMC was showing available booster appointments for ages 16 and up for Jan. 6. Other Army bases were also offering the booster to older teens, Mattorano said.

Ramstein officials said Monday that they are awaiting official guidance from the Air Force on when to begin offering the booster to 16- and 17-year-olds.

At Spangdahlem Air Base in Germany, health officials “are exploring options” for making booster shots available to 16- and 17-year-olds, 1st Lt. Megan Morrissey, a spokeswoman for the 52nd Fighter Wing, said in a statement Tuesday.

As of Monday, more than 2,700 COVID booster shots had been given by the hospital, which only allows appointments for the jabs, McMillen said.

It wasn’t clear Wednesday if Naval Air Station Sigonella in Sicily or Naval Station Rota in Spain also would offer boosters to 16- and 17- year olds.

Military bases in Italy have faced increased demand for boosters due in part to new Italian restrictions that limit vaccination validity to nine months after the last shot. For example, a person who received their final COVID-19 vaccination in February would no longer be able to visit restaurants, bars, sporting arenas or other venues unless they’ve received a booster.