Half a million soldiers have taken the Army’s new fitness test, but not in time to force leader to call himself ‘big mouth’ 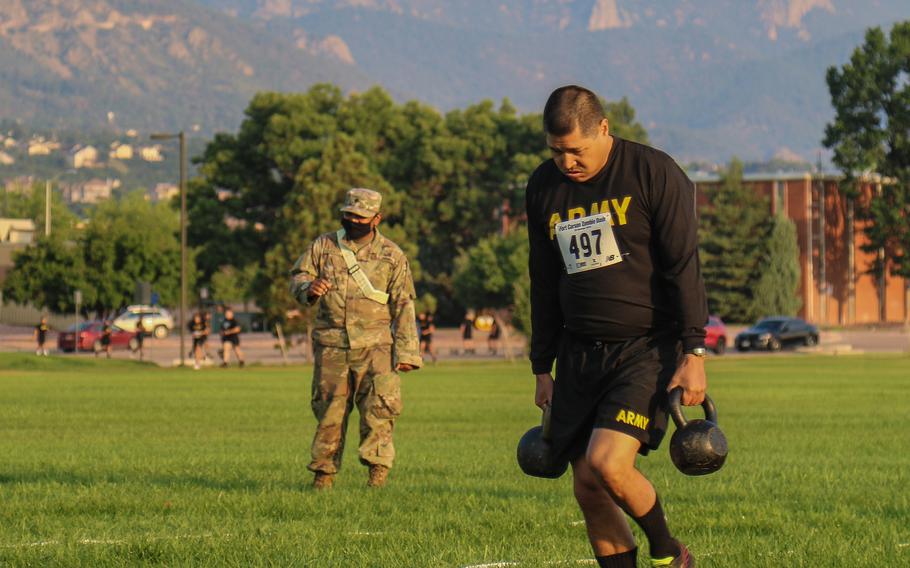 Chief Warrant Officer 3 Justin Montes, of the 4th Infantry Division, carries kettlebells during the sprint-drag-carry event of the Army Combat Fitness Test on July 21, 2021, at Fort Carson, Colo. Sgt. Maj. of the Army Michael Grinston didn't have to change his biographical blurb on Twitter, in line with a pledge he made, when soldiers couldn't register 500,000 ACFT scores by the Army's 246th birthday. (Woodlyne Escarne/U.S. Army)

The Army’s top enlisted leader won’t have to fulfill his promise to call himself “a nobody with a big mouth” in his biographical information on Twitter.

Sgt. Maj. of the Army Michael Grinston’s offer was a challenge he issued to soldiers that sought to push the number of Army Combat Fitness Test scores registered to 500,000 by the service’s 246th birthday, which occurred June 14.

“Follow up: We didn’t hit 500K in time,” he tweeted Aug. 6, nearly two months after Stars and Stripes and others began inquiring about the results via Twitter, Reddit and emails to the Pentagon.

The quip that Grinston had offered to add to his bio came from an insult written on his Twitter feed. He has amassed nearly 40,000 followers on the social media platform.

Many senior Army leaders have embraced Twitter to share the service’s official messages, expound on its efforts, highlight soldier achievements and engage with the force and the public.

But even though the challenge missed the mark, Grinston’s efforts weren’t in vain.

At the June deadline, the service was about 40,000 tests short of the tweeted target, Army spokesman Lt. Col. Gabriel J. Ramirez said via email Friday. As of Aug. 13, nearly 540,000 soldiers had entered more than 781,000 scores into the system, Ramirez said.

The ACFT is the first overhaul of the Army’s fitness test in 40 years and was initially rolled out with plans to make it official by October 2020. But Congress called for it to be halted in January, and lawmakers have expressed concerns over gender disparities in its results.

Some 44% of women had failed an earlier version, compared with 7% of men, data showed. A new version, dubbed “ACFT 3.0,” was meant to address the concerns and has been under evaluation since the spring.

Testing rapidly increased after the release of the new version in March. Grinston issued his challenge via social media shortly after it was introduced.

Meanwhile, the Army began letting corporals and specialists take the legacy Army Physical Fitness Test to keep up their promotability while the service sorts out the issues with the ACFT.

“I’m proud to see the significant jump in the number of ACFT scores,” Grinston said in a statement Ramirez provided. “As I visit different units, it’s clear the ACFT is changing the culture of fitness around the Army.”

If we get half a million ACFT Scores in DTMS by the Army Birthday (June 14), this becomes my new bio.