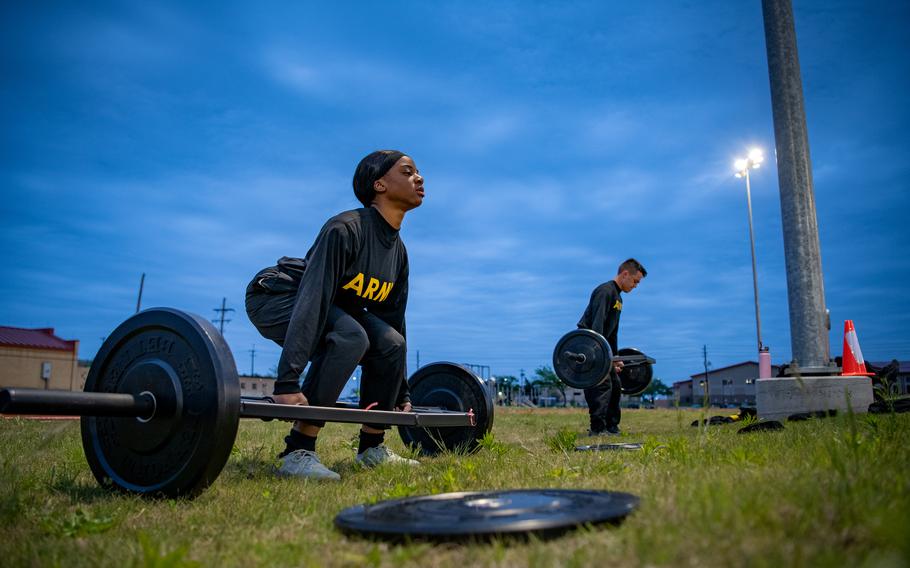 WASHINGTON — The chairwoman of a House Appropriations Committee subpanel slammed Army officials at a hearing Monday over what she called insufficient answers to questions on how the service is combating gender bias, specifically with its new combat fitness test.

Rep. Debbie Wasserman Schultz, D-Fla., grilled Sgt. Maj. of the Army Michael Grinston on why so many women are unable to pass the service’s new combat fitness test.

“The test shouldn't be structured in a way that is unfair and makes it so lopsided that it's impossible for women to really be able to succeed and that definitely will reflect in your recruitment and retention efforts. So it looks like you have a problem and I hope you recognize that,” Wasserman Schultz said during a hearing of the subcommittee on military construction, veterans affairs and related agencies about Army quality-of-life issues and installation updates.

The Army Combat Fitness Test has long been criticized by Congress for its design, which lawmakers say comes at a disadvantage for women who struggle to pass the test. Data revealed in April shows 44% of women failed the ACFT, compared to 7% of men, Wasserman Schultz said.

The Army rolled out the ACFT version 3.0 in March after Congress demanded a halt to testing in January. Lawmakers ordered the service to conduct an independent review of the Crossfit-style exam to ensure the test does not favor men.

The new fixes aimed to alleviate concerns from lawmakers over the low pass rate. Army officials floated the idea of including new scoring tiers for male and female soldiers to recognize “physiological differences” between men and women, but the changes were not implemented. Instead, the ACFT 3.0 made a two-minute plank an alternative event to the leg-tuck, in which a soldier must bring their knees to their elbows while hanging on a bar.

Wasserman Schultz on Monday demanded the Army officials at the hearing —including Lt. Gen. Jason Evans, deputy chief of staff of the Army, and Jack Surash, acting assistant secretary of the Army for installations, energy and environment — examine how the new test was implemented.

To ensure women are capable of passing the test, Grinston said athletic trainers and strength coaches have been added to each brigade and the Army National Guard. He also said a second independent review of the test will determine whether the test disadvantages one group.

“You have to make sure that all our soldiers are fit for combat. So, we are adding those strength trainers to make sure we can give everybody the opportunity to get better in physical fitness. Our goal is not to disadvantage any group in the Army Combat Fitness Test,” he said.

The subcommittee’s ranking Republican John Carter also pressed the Army officials on what they are doing to help an individual soldier who fails the test.

Grinston said more than 6,000 master fitness trainers in the Army are tasked with developing individual training plans for those who struggle to meet the requirements of the test.

Even for the women who do pass the test, Wasserman Schultz addressed other challenges that come after graduation.

She cited a report by Task & Purpose on a survey conducted by the Army Special Operations Command this month that found 40% of women in Army special operations face gender bias in the workplace.

The issues ranged from ill-fitting equipment to pressure from unit leaders to return from parental leave early, according to the news report. The internal Army report found 39% of all women surveyed said they struggled with equipment that didn’t fit them properly. The number increased to 45% from women without children.

Wasserman Schultz pressed for details on how the Army is creating uniforms that are tailored to women in special operations.

“I would really like to know, sergeant major, what excuse the Army has for not supplying equipment made to fit women. And what is the Army doing to ensure women don't face gender bias from the ACFT, all the way to taking parental leave. I mean I just find your answer insufficient,” Wasserman Schultz said.