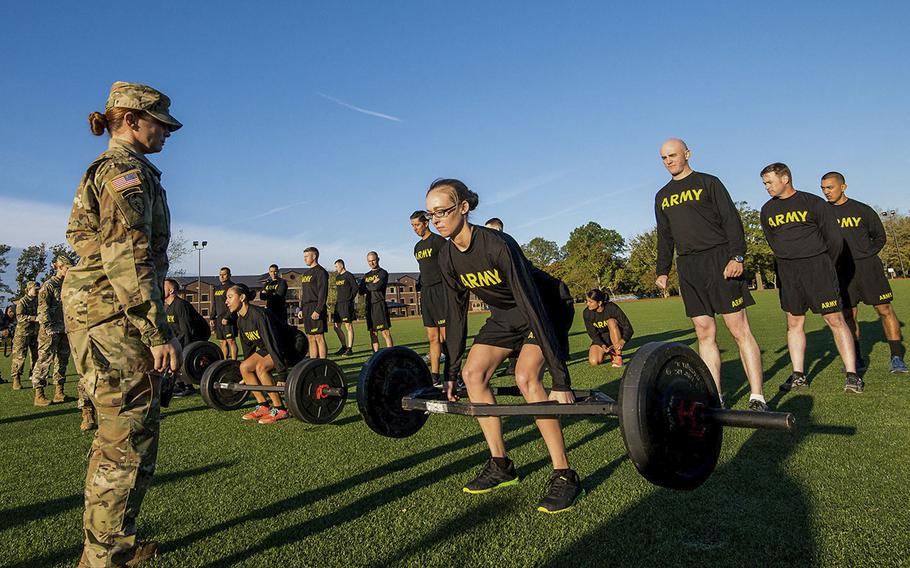 Buy Photo
In an Oct. 23, 2018 photo, Army Staff Sgt. Jessica Smiley, a test grader with the Army's Center for Initial Military Training, looks on as soldiers with the 128th Aviation Brigade at Fort Eustis in Virginia demonstrate the deadlift, the first of six events of the new Army Combat Fitness Test. (Corey Dickstein/Stars and Stripes)

The Army has for a third time in three years adjusted its long-awaited, combat-driven fitness test to include new scoring tiers for male and female soldiers meant to acknowledge their “biological differences,” top service officials announced Monday.

The Army will begin testing its soldiers on the Army Combat Fitness Test version 3.0 in April, Sgt. Maj. Of the Army Michael Grinston told reporters. The test’s new version will include new gender-based performance scoring tiers and the permanent implementation of the plank as an option for the six-event test.

The changes come as Army officials work to alleviate concerns raised by lawmakers that past versions of the ACFT were unfair to women, who posted a sub-50% pass rate of the Crossfit-style evaluation. In January, Congress halted the Army from fully implementing the ACFT until it was adjusted and studied by an independent group to ensure it did not favor men.

A soldier’s performance tier would then be included on evaluations and reported to boards to inform promotion decisions, instead of just a soldier’s actual ACFT score.

“This new [tiered] evaluation system has a goal of achieving two objectives,” Hibbard said. “First, it recognizes above average physical performance – something that's inherent to the Army’s culture. And, second, it accounts for the recognized physiological differences between men and women and removes the direct competition between males and females.”

Lawmakers, when they halted the Army’s ACFT efforts earlier this year, said they were worried struggles with the new test among female soldiers might slow the rate of promotions for women in the service, who compete with their male counterparts for advancements and jobs.

Grinston said he has spent recent weeks speaking with lawmakers about their concerns and the forthcoming changes the Army intends to make to the ACFT.

“It's been received very well” by lawmakers, he said. “My final question when speaking with them has always been, ‘Are we moving in the right direction?’ And, predominantly, they all believe that, yes, we are.”

The actual scoring system for the test will not change, Hibbard said. All soldiers, regardless of age or gender, must score a minimum of 360 of a possible 600 points – 100 points per event – to pass the test, which in the future will be a requirement to enter and remain in the Army.

For now, scores do not count for or against soldiers, as the Army is using its ACFT testing primarily to gather data to adjust its scoring system. But Hibbard and Grinston said the service aims to re-introduce the testing as a requirement by March of next year.

The new version of the test, however, does scrap the job-based scoring tiers that the Army originally planned to make part of its ACFT effort. Army officials initially proposed three job-based scoring tiers, which would require different minimum scores on the ACFT based on the physical requirements of a military occupational specialty, but ultimately dropped that effort as unnecessary, Hibbard said.

Another change that will be implemented with ACFT 3.0 is the permanent inclusion of the two-minute plank as an alternative event to the leg-tuck. The leg-tuck, in which soldiers hang from a pull-up bar and tuck their knees up to their chins, has proven the most challenging for soldiers, Grinston said.

“It allows for us to account for those in the service who have been in for 15, 20, 30 years that have never been asked to build the upper body strength that’s necessary to do something like a pull up or the leg-tuck,” the general said. “It’s significantly hard to [build strength] at that age, so by having an alternative event [the plank] we can still evaluate core strength.”

The Army hopes measuring soldiers’ core strength and motivating them to improve that strength can drive down the high number of troops who struggle with joint and back injuries that make them unable to perform combat-related tasks.

For now, Grinston said, the Army needs more soldiers taking the ACFT and it needs unit leaders reporting scores in the Defense Training Management System, or DTMS, which allows the service to evaluate anonymous test scoring among soldiers. To date, only 25% of the Army’s soldiers have an ACFT score reported in DTMS and only 7% have two or more scores reported.

Grinston said the more data that the service has, the better it can tailor the test. He expects future changes to come as more soldiers take the test. He also expects scores to scale higher in the future as soldiers adjust to the ACFT events versus the old, three-event Army Physical Fitness Test, which the service phased out last year.

“The most important thing is we need soldiers to take the test and to put [scores] in the Defense Training Management System so we have the data we need to see if we need to make any more adjustments,” Grinston said. “We need everybody taking the test.”