Army’s new fitness test to be implemented in October, but scores won’t count for some time 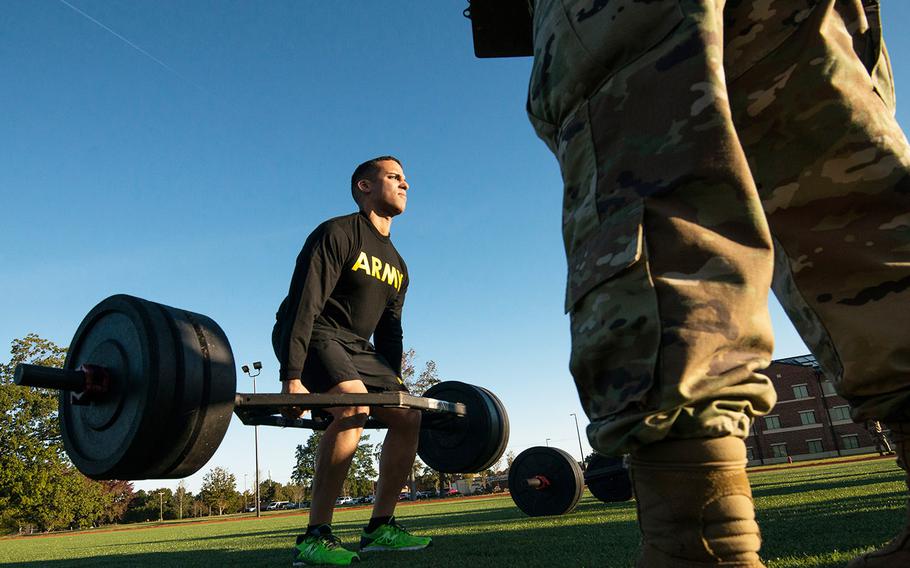 Buy Photo
In an Oct. 23. 2018 photo, a soldier with the 128th Aviation Brigade at Fort Eustis, Va., attempts the deadlift during a demonstration of the Army’s new Army Combat Fitness Test. (Corey Dickstein/Stars and Stripes)

WASHINGTON — The Army will adopt its long-planned, six-event physical fitness test as its official evaluation on Oct. 1, but with fitness testing suspended amid the coronavirus pandemic, service leaders said soldiers' scores will not count for some time.

Sgt. Maj. of the Army Michael Grinston announced the shift to the Army Combat Fitness Test on Monday in a move that means most soldiers will never again have to take the 4-decade-old Army Physical Fitness Test. While the ACFT will become the test of record for soldiers on Oct. 1, the Army is still working to finalize the evaluation, Grinston said.

“We’re going to have to take physical fitness tests once we come out of this [pandemic-caused] pause,” he told reporters Monday during a news briefing. “As we begin anew … we wanted to go to the new Army Combat Fitness Test, and pretty much the goal for this year is just to take the test.”

The Army initially planned for the new test to be fully implemented by Oct. 1, but with soldiers locked down under stop-movement orders and many of them teleworking, the service indefinitely paused its physical evaluation requirements in March and announced it would hold off on officially implementing the new evaluation.

The pandemic also stopped the Army from completing a second round of testing meant to evaluate ACFT scoring and the initial set of standards it rolled out last year.

Once restrictions are lifted, Grinston said, the Army will use information it gathers from soldiers conducting the ACFT after Oct. 1 to help with any adjustments that still need to be made to the test. For now, the scores will not be used to assess soldiers in any official manner, including on annual evaluations.

“It will not be used for any flagging or adverse action,” Grinston said. “If you don’t pass the test, you will not be separated from the military, at all.”

The Army will reevaluate when it will restart the requirement of passing physical fitness tests to remain in the service. The Army has tentatively marked March 2022 as the time when soldiers must be able to pass the ACFT, but Grinston said that could change to an earlier or later date.

The Army is making at least one other adjustment to the test — adding an alternative test to its leg tuck event, which primarily tests core strength. The service will allow soldiers who cannot do a leg tuck to instead complete a two-minute plank, Grinston said.

The plank is only meant to be an alternative for a short time, as Army leaders believe the leg tuck and the test’s other five events can be completed by any soldier in the proper health to serve.

“What the leg tuck does that the plank doesn’t is they both work the core muscles, but where the leg tuck benefits over the plank, is it does hips and it does shoulders,” said Maj. Gen. Lonnie G. Hibbard, commander of the U.S. Army Center for Initial Military Training. “So that complex exercise (the leg tuck) gets after many more common soldier tasks and warrior tasks.”

The plank is the second alternative event the Army has approved. It approved a stationary bike ride in place of the 2-mile run event for soldiers with permanent medical profiles that prohibit them from running too far. The bike ride initially was planned for a 15,000 meter ride but has since been dropped to a 12,000 meter ride, Army officials said.

The ACFT’s other four events are deadlifts, a standing power throw, hand-release pushups and the sprint-drag-carry. Army officials spent years evaluating tasks soldiers typically do in combat — like loading rounds into cannons or tanks, dragging a wounded comrade, or moving across a battlefield — to develop the new test, which they say better correlates to those activities than the old, three-event test.

Soldiers have long expressed concern about the equipment needed to complete the ACFT, which includes a deadlift bar, a pullup bar, a weight sled and a medicine ball. Without access to the equipment, they cannot train for all events, troops have said.

The Army has acknowledged that issue. Hibbard said Monday that about 95 percent of the needed equipment has been distributed throughout the Army, though some of it might not have reached smaller units yet.

The general also said some 200,000 soldiers will have completed the new test by Oct. 1. Of those, some 135,000, are new soldiers who have been training on the ACFT since October as recruits.

Grinston said the Army had seen ACFT practice scores improving in the months before the coronavirus pandemic.

“This is going to make us stronger and make us a healthier Army,” the sergeant major said. “We just need to evolve and progress. This is good for the Army."